Blacksparrow Auctions is having their biggest name auction to date: The Hunger Games Costume Auction on November 16. What the heck is Blacksparrow Auctions? They are the newest auction house in the industry, having begun earlier this year. They have so far concentrated on the entertainment industry for the most part, with auctions like "The Monsterpalooza Charity Auction"and "The Hollywood Collection: Photographs and Autographs". 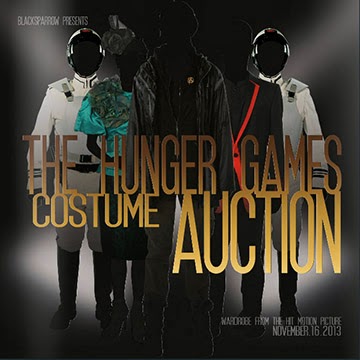 But with "The Hunger Games", Blacksparrow is raising its bar. The popular book and movie series is a huge name for a newcomer to have, and it looks like they've made quite an effort to play with the big boys. The auction's catalog can only be called beautiful, with top-notch, large images of every piece dominating each page. It's deceptively simple-looking.

So why am I writing about this auction that has nothing to do with Star Trek? Because the president of Blacksparrow is a gentleman named Fong Sam, a man well-known in collecting circles. Before starting Blacksparrow, Fong Sam worked at Profiles In History, the well-known auction juggernaut which is the subject of the SyFy show "Hollywood Treasure". Fong was seen in several episodes. And while I'm no real fan of Profiles (see some of my earlier writings for details) I am a fan of Fong Sam. While at Profiles he was the ONE AND ONLY person that I ever dealt with who was not only competent, but friendly and incredibly helpful. He returned my calls, he found my missing item (it had been "lost" for some 5 weeks!) and shipped it to me overnight for free. Now THAT is service. No one else at Profiles was remotely helpful, despite  numerous calls and e-mails. Only Fong came through for me.

In an industry rife with incompetence, dishonesty and down-right stupidity (Premiere Auctions, anyone?) I think there's definitely room for a new player like Blacksparrow. With Fong Sam's reputation as a service-oriented professional, I'll certainly give him the benefit of the doubt in these early days. If you're a "Hunger Games" fan, I doubt that you'll be disappointed. If Blacksparrow ever does a Star Trek auction, I'll definitely be there!

And may the odds be ever in your favor!