STAR TREK : DISCOVERY FULL TRAILER HITS. AND SOMETHING ELSE HITS THE FAN.

Oh, the haters gonna hate. Not me.

In the Star Trek: Discovery trailer that was released a while back, one of the many surprises was a new take on a spacesuit for the series. To say that it was a departure from anything seen so far in Trek is an understatement. 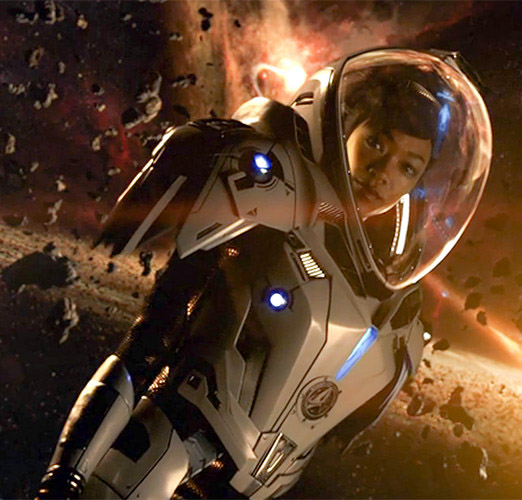 Whoa! Now THAT is new! And not only is it unlike any other Star Trek suit, it's really unlike any movie or TV spacesuit, and that's a tough thing to do these days. It's worth noting that spacesuits in Trek go all the way back to the original series. Most later incarnations had a version of their own .

What's interesting to me about all these different versions is that there's really no carry-overs from one to the other. They are all unique in their design and totally different from each other. They're also versions of a very basic suit. With the exception of The Motion Picture version, none had any kind of flight capability (though I wasn't much of a watcher of Enterprise so I can't say for sure regarding that one). But the new Discovery version definitely has the capability to move independently through space which can make for some very cool uses in its future.

This week at SDCC17, CBS had this new suit on display in all its glory.

Now that's amazing looking! FWIW, up to now my favorite Trek spacesuit design was hands down the Motion Picture version. But this one might take its place one we get to see it in action.

I'll add the now-familiar acknowledgement – I KNOW this is apparently too advanced if it takes place before TOS. Well, apparently this is both a prequel AND a reboot! Once you accept that, all things are possible. Infinite Diversity in Infinite Combinations.

Frankly, I'm psyched to see this baby in action. It's sleek and sophisticated and interesting. In short, it's cool!

At long last, after getting a few fleeting glimpses of the props and costumes created for the upcoming Star Trek: Discovery, the wait is over. CBS pulled out all the stops at San Diego Comic-Con with big displays of all the different pieces that we'll be seeing in the new series. And the pictures don't disappoint!

First off let me address the 800 pound gorilla in the room: I know a lot of fans are having fits of apoplexy about the look and feel of Discovery. That's because they're locked into fitting this into existing Star Trek lore. To them, I say this: don't. Liberate your minds from old. See this series for what it is – a reboot of the Star Trek franchise. But CBS says it's ten years before Kirk and Spock, huh? Well, apparently they aren't quite the Kirk and Spock we know. Once you accept that, all things are possible. Infinite Diversity in Infinite Combinations, right? Pretty sure I heard that somewhere.

And now, back to our story! Let's start with the basics. Phasers! Click for larger images.

Now THAT, my friends, is a PHASER! It has the overall form of the classic Original Series original complete with centered handle and small Phaser 1 attached at the top. There's a few nods to the original's details as well with the emitter nozzle, rear fins, and side dial. The grip is much more like an Assault Phaser from the TOS movies but that's fine by me. This looks sleek and hefty, like a Phaser should.

The emitter nozzle has an interesting detail – three different-sized emitters. Some have said it looks like an old-time movie camera (it does), but more importantly it emulates the nozzle from the Laser Pistol from the first Star Trek pilot made in 1965, The Cage.

I've read where some have called this a bunch of details from other phasers thrown together. I could not disagree more. Yes, it takes inspiration from the past, but in elegant ways, in my opinion. I think it uses the best of the past to create a more sophisticated version of a familiar prop.

Next up is the ever-present Communicator. This design is based on the TOS original, emulating what Kirk and Spock used on landing parties and are instantly identifiable as such.

Like its inspiration, this version features a gold flip antenna/lid, a circular center detail and three buttons. The lid detail was taken from the Communicators used in Star Trek II: The Wrath of Khan rather than the TOS design, and since I think it gives it a more robust look so I applaud the choice.

As for that center section, it apparently does stuff that we've never seen before. Lookee what's inside:

Very nice. The Comm will give some type of detailed information. Cooool. To round out the traditional Landing Party set is the Tricorder:

This is definitely based on the original TOS design but with a much larger screen. The bottom part is much like that of the Tricorder seen in Star Trek III: The Search For Spock but the overall proprtions are also reminiscent of a 1960 Philco Portable TV thought to be the inspiration for the original prop.

The large screen and overall boxiness is very much like the old Philco. The screen has a major upgrade from past versions with live info being displayed. No good shot is available yet but this gives us an idea of what to expect:

The last piece of Starfleet hardware shown at SDCC is a Phaser Rifle. This was an item seen only in a single episode of TOS though later Trek versions all had their own versions that were extensively used.

While there's few obvious crossover elements, one detail did make the cut. The original's three tubes appear to be emulated in the new rifle. The forward handle is also present but that's about it. The scope is similar to those seen on later rifles. The TOS version was very "rag-gun-y" so it's not surprising few elements could survive.

So that's it for Starfleet tech. Check out part 2 for more from SDCC.

You know the old saying – the more things change, the more they stay the same. That could have been written specifically to describe Star Trek fans. They're always bitching about something, amiright? If it's not The Motion Picture, it's Star Trek V. If it's not Insurrection it's JJ Trek. OK, so some of those are worth bitching about. So it's no surprise that the new show, Star Trek Discovery is garnering its share of nay-sayers. For a show that has yet to broadcast a single episode, it has truly brought out the best in Trekdom. Darrin Bell, creator of Candorville has summed it up masterfully. 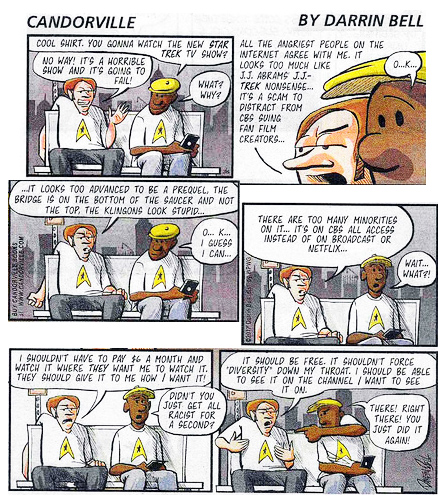 Now, it may come as a surprise to many who are either not old enough or may simply have convenient memories, but no version of Star Trek created more bellyaching than Star Trek: The Next Generation back in 1987.

"What? Surely you jest?! My beloved NextGen was the source of unrest at its inception?" Yes, princess, the much-loved second Trek to the stars, the one that created a golden age of Star Trek and made like a zillion dollars for the studio was not well-loved upon it's premiere. I myself uttered such intelligent musings as "Geez, they named the android Data? Really? Well, that sucks!" 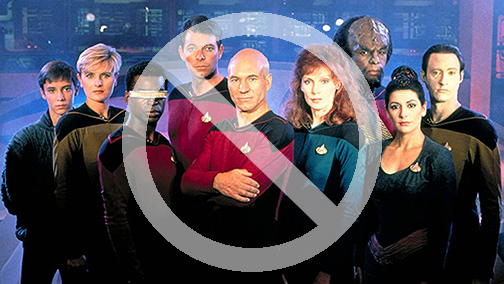 You name it and NextGen got hit with it. Who can forget:

"That's the Enterprise?!? THAT'S NOT THE ENTERPRISE!!!"

"Wait, the captain is a bald Frenchman played by an English guy I never heard of?!"

And the always favorite:

Ah, such erudition. Those were heady days!

Now, if we simply replace a few words (very few!) you get today's trashing of Discovery:

And since some things never change:

So we've been there and done that. But instead of learning from history, we are, alas, destined to repeat it. Every. Damn. Time. Because over the last thirty years, every new Trek incarnation was greeted with a shit-load of negativity before airing a single episode! Just like today.

It's human nature, apparently, but I find it more than a little ironic that a show that has as one of its base tenants the concept of "infinite diversity in infinite combinations" can generate so much close-mindedness, unenlightened tunnel vision, and a fair share of misogyny with a bit of racism thrown in (it's 2017, after all).

For what it's worth, I'm not a fan of all forms of Trek. While I loved TNG and DS9, I was less enthralled/indifferent to Voyager and Enterprise. And I despise JJ Trek because JJ Abrams.

That said, I plan on doing what I've done since learning my lesson with NextGen: keep an open mind and hope for the best. And then will I actually watch the damn show before judging it!! And if it sucks, only then will I bitch. You betcha. But I'm going to give it a chance.

Your mileage may vary. Especially if you're already bitching.

PS: IMO, it took TNG two full seasons to actually become good. I still consider most of Seasons 1 & 2 to be unwatchable.
Posted by Don at 9:27 AM 2 comments: