Star Trek Discovery was finally given a release date this past week. Part of the announcement consisted of this little poster: 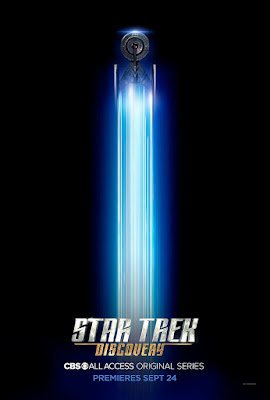 It's very nice and all, but my favorite take-away is the little image of the ship. Up to now all we've seen are these shots: 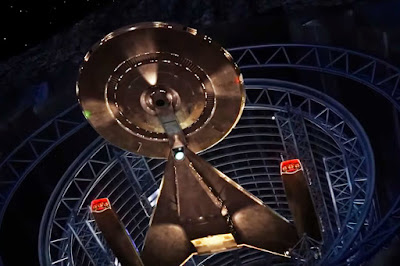 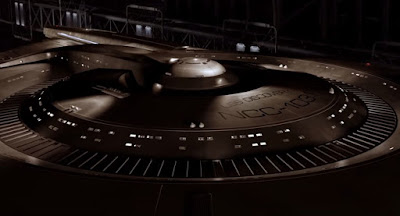 Kind of a "Soviet-looking" starship, ie: inelegant. But then we have the new shot. Does it reflect an updated version? 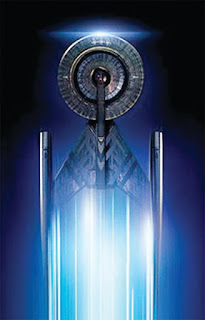 Maybe it's just the lighting and speed effects but I think this has a sleeker feel to it. And we can see that the secondary hull has a definite TOS Klingon-ish shape to it. 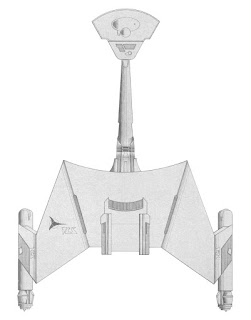 Coincidence? We'll have to wait until September to see. But I hope this latest image reflects a cooler-looking Discovery than we've seen up to now. 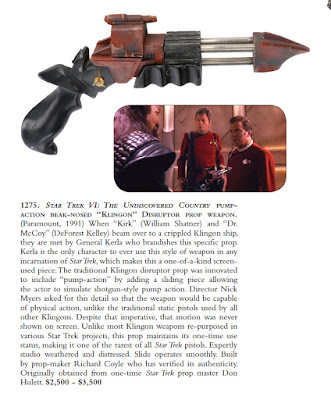 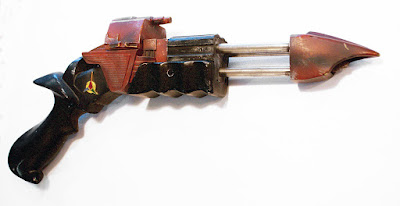 A REAL, HONEST-TO-GOD ORIGINAL SERIES PHASER IS ON EBAY?!? UNFORTUNATELY, NO.

In yet another example of trying to fish for suckers, there's an Ebay auction going on for those with more money than brains. The listing can be found here: 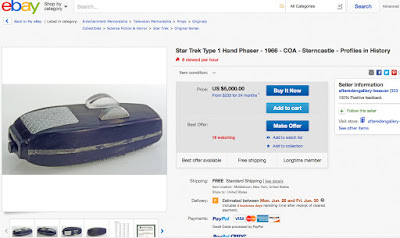 As is usually the case with such things, it is short on details but long on photos. The reason for that is obvious. There are no details to be given so the photos are meant to give the air of authenticity. But, while there's an odor wafting from this auction, it ain't authenticity. Here's what you'd need to know before buying any such piece.

1. Where does the piece come from?

2. How does it compare to known examples?

Let's tackle the origin issue. The seller, one "afteredengallery-beacon" states that this was sold by Profiles in History back in 2000 and has a Certificate of Authenticity from someplace called "Sterncastle Collectibles". That's all well and good but what does that really tell us about the piece? Only that an auction house was willing to sell it back in 2000 for a cut of the profits and that a place that nobody ever heard of was willing to print out a spiffy COA on a desktop printer.
What it does NOT tell us is anything about the actual origins (known as provenance in the hobby) of this piece. In other words, how did it get from the studio to the owner? Yes, it filtered through an auction house but so what? Back in the nineties and early 2000's, several auction houses were taken in by good fake copies of Star Trek original series (TOS) props ranging from this type of Phaser 1 to all the usual suspects – Tricorders and Communicators as well as full-on Phasers. This was a dark time before the internet had caught up to all the info that was out there and so fraudulent pieces could thrive and be sold in the marketplace without red flags. But once known examples were analyzed and their details presented online, it was realized that the vast majority of these TOS pieces that had been sold at auction were, in fact, fakes.

That is why it is so important to be able top track a piece back to the studio. If that can't be done, it puts a high probability of fake-ness on any TOS piece. Provenance is everything when it comes to these pieces.

As to how it compares to known versions, the quick answer is "not well". While at a glance, it certainly looks like it could be the real-deal, upon close inspections things quickly go south. Here's why. Take a look at the shots in the auction. 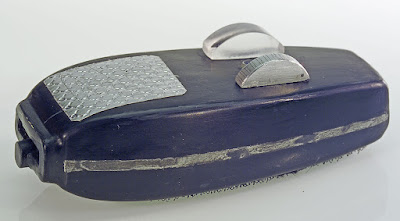 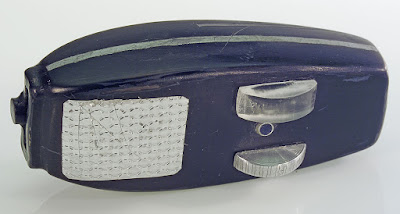 Oooooh. They certainly have that old-timey grunge look to them, don't they? They look very much like a crude hand-made prop from the sixties. Of course, that's the whole point, so there's no surprise there. It's when we look at the details that the facade of authenticity cracks.

First off, it's important to know that there were various types of props made for various uses.

1. The "hero" props were made for close-ups and featured moving parts and details that added to an authentic look.

2. "Mid-grade" props were made to be used in most scenes. They would be in the hands of the landing party or the security team. While they had some detail, it was just enough to fool the camera from a distance. They had no moving parts and simplified details.

3. "Stunt" props were usually made of rubber and were simple, solid castings. These were used for action scenes or if an actor was far from the camera. They had some basic, painted-on detail.

The piece in question would fall into the "mid-grade" category as it has no moving parts or details but is not a simple stunt version.

Here's how the auction piece stacks up to known, authenticated pieces.

NOTE: It's important to mention here that this authentication was done by many people who know a great deal about the original pieces and not by me. I heartily concur with their methods, however, and I stand by their educated, informed opinions.

This metal detail piece is known as the "crispy" to prop aficionados, and is made from a thin piece of metal that is stamped with a pattern. Note that the "real" phaser's pattern is distinctly a diamond pattern while the auction piece is, well... something else. But whatever it is, it definitely does not match.

Next up is the center part of the phaser:

On the auction piece we see a stud in the center which is generally thought of as the "trigger" as that's where the actor's thumb would usually rest. The problem here is that the mid-grades had no stud. Only the detailed hero piece had that detail as seen in this screen capture from an actual episode:

You can just make out the red stud behind the wheel. You can also see all the additional detail that is not present on a mid-grade (and not present on the auction piece).

And speaking of the wheel, the auction piece has crudely etched ridges while real props have specific machined fluting, another detail that doesn't match.

I also don't think the over-all shape is correct but that's too tough to call from photos like these. But since every other detail doesn't match, the shape is a moot point.

Based on these known facts, it is my opinion that this piece is not, in fact, an authentic TOS prop. For what it's worth, if I thought for a moment it WAS real, I'd have hit the $5,000 "Buy It Now" button immediately. Five grand would be a bargain for such a piece!

Which brings me to my last piece of evidence – that price of $5000. That's a sucker's price, in my opinion, designed to be attractive to an unsuspecting fan who thinks they're getting a bargain. It's a price that tells me that the sellers themselves do not think it's real because if it was, they'd be selling it for ten times that price (the seller told me herself that she knows a real piece is worth more!). And since no mere replica or fake is worth $5000, it confirms my theory of being a sucker price. Why else would you price it at that level?

So, alas, this is yet one more example of another fake TOS prop coming into the marketplace. It sucks but what can we do? It does have some positives, though, in that it definitely reinforces the true rare nature of an actual authentic TOS piece.

Maybe next time? We can only hope!