2017 ENDS WITH A NEW PROJECT FOR THE UPCOMING YEAR. STAY TUNED!

It's been a while since I wrote anything. My bad but I just haven't felt motivated. Luckily I've had a change of heart, though, and I've found a project that has lit a fire under me. At long last I'm going to build my home display for my collection. And while that may not seem like it's a big deal, I have delusions of grandeur so I have planned on a somewhat grand scale.

I'll be sharing the details in future installments but I'll share a piece of what I have in mind. A significant part of my collection is comprised of various screen-used bridge panels as used on the Enterprise-A and the Excelsior in Star Trek V and VI. I want to show the panels off in a way that is reminiscent of the actual bridge set.

One of the things I thought would be a cool addition to my panels was a Trek 6 version of the Master Systems Displays that we see in later Trek incarnations. Star Trek VI has such a panel but only on the Excelsior bridge. I've always thought it was a cool addition and wished that the Enterprise bridge had featured such a piece as well. The closest thing to it was the ship's diagrams that appear on the back walls of the two Turbolifts. Many years ago I bought one of those screen-used diagrams direct from Doug Drexler himself and it is a prized possession for me.

But as cool as it is, it's not a very visually exciting piece, especially when compared to the Excelsior graphic which seems to be about 5-6 feet wide and dominates the bridge's background. There's a number of different panels around the bridge of the Enterprise that show various images of the ship, but nothing very large.

And here it is on-screen: 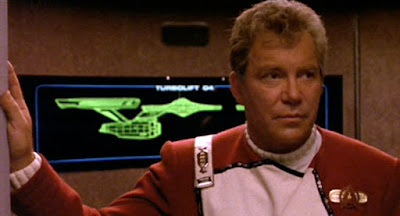 Pretty cool, right? I just wish there was more to it. So, to that end I thought I'd try my hand at making one that could be used in conjunction with my screen-used pieces. Here's my first go at it: 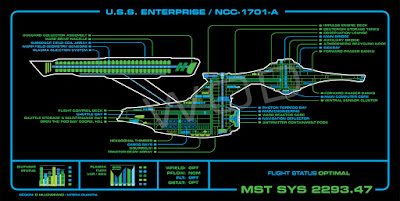 I went with a profile view rather than the top view used on the Excelsior. I did this because I felt the profile allowed me to create more interesting things to point out around the ship. I went with a cutaway for the same reason which I don't think the Excelsior has. It's hard to tell, though, since I can find no clear images of that specific panel. I also kept the style of presentation very simple in keeping with the overall design established on the real bridge panels by the awesome Mike Okuda back in Star Trek IV and then carried through in the rest of the TOS films.

For additional inspiration, I turned to none other that Doug Drexler himself who created the MSD panel for the Enterprise-B as seen in Star Trek: Generations. Here's a shot of that panel: 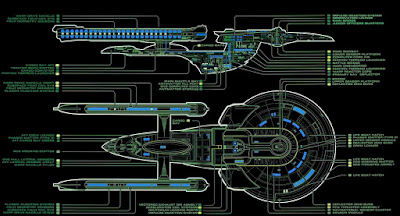 Doug did a great job of using the Okuda design approach. I've always been a fan of this work. In his Ent-B version, Doug combined the side and top views which give a more detailed overview than a panel only featuring one view. However, the Enterprise-B itself is a more elongated design than the Enterprise-A, being based on the Excelsior. That elongation lets the two views better fit a more horizontal space that would the Ent-A. This profile is done as a cut-away so I borrowed/stole heavily. Thanks, Doug!

Of course, if filmed today, Star Trek VI would present these graphics on live screens that could dynamically change their views on the fly. Content on the screen would be updated in real time with the fictional starship data being constantly revised.

Alas, there will be no 5-foot TV screens in my display. So I'll stick with the traditional static approach which will yield a more authentic match to the source material.

So that's where I'm at. At least for today. I'll no doubt revise this several (million) times because, well... that's what I do. You can check out all my screen-used panels HERE.

I'll be sharing additional components of my over-all display over the coming weeks and months ahead. I hope you'll check in. Until then, as always –