When Star Trek: The Motion Picture came along in 1979, Trek fans were introduced to an entirely new Star Trek, far removed from anything seen before. One of the key components introduced was completely new costume design by Robert Fletcher. Gone were the bright golds, blues and reds from The Original Series. In their place were muted colors with an emphasis on gray, a directive from director Robert Wise. And instead of a single style of uniform as seen in TOS, there were now uniforms for every occasion, use, or taste. The crew were dressed in one-piece jumpsuits, 2-piece pajamas, 3-piece lounge wear (no, I'm not kidding) and on and on in a seemingly endless variety. But perhaps the most striking new costumes were featured in Scotty's engine room – the Engineering Radiation Suit or Rad Suit.
The Rad Suit was a completely new concept that had no counterpart in TOS. It spoke to the idea that the Engineering section of a starship can be a very harsh and dangerous place – when energy is released by the controlled annihilation of antimatter, there must be one heck of a lot of radiation. Hence, Rad Suits to protect the engineers that work right on top of a force of nature.

The suits were bright white with all sorts of padding and whiz-bang accoutrements that hinted at mysterious, unknown uses. They were finished off with a heavy black collar, heavy gloves, and big black-treaded boots. Some engineers could be seen wearing matching helmets. While it would have made sense to have everyone wearing helmets (the head would be the most important body part to protect, after all) the fact is that when actors wear helmets, everyone looks alike. And in Engineering, we need to pick out Scotty right away, so drama trumps reality and the helmets became strictly background pieces, usually being carried under an actor's arm.

Though most suits were white, there were a few that were not. On his original design sketch, designer Fletcher make this notation: "Make 4 in orange for emergency fire suits". I have not been able to find these in TMP, but they show up in later movies so I have no doubt that they were made for TMP.

It's impossible to say exactly how many suits were made, but based on known sales there had to be at least twenty-eight white versions and six orange. And since a lot of money was spent on The Motion Picture ($40 million – the most expensive movie ever made at the time!) and later productions were always tight with budgets, I think it likely that all Rad Suits seen throughout the TOS films were originally made for TMP in 1979 and reused over and over. This idea is supported by the appearance of multiple actor's names inside various Rad Suit components.

An interesting side note: in TMP, an old movie-making trick effect called "forced perspective" was used with the help of Rad Suits. Two special Rad Suits were made in very small sizes and worn by small actors (kids?) in the background of the Engineering Warp Core shots. The small suits made the set appear larger and deeper than it actually was (see photo, below).


When Star Trek II: The Wrath of Khan came along, the Rad suits were reused and seen extensively throughout the movie. Minor updates made by Fletcher included the addition of a rank/department strap on the arm, a Starfleet patch on the shoulder, some metal clips to the suit's front and a disk designed to accept an emergency breathing tube. Scotty and his crew were wearing Rad Suits throughout the attack by Khan, and when Scotty memorably carries his dying nephew onto the bridge, both are clad in burnt, heavily distressed versions. It became an iconic moment in the film.
In both Kirk's inspection scene and Spock's funeral scene, both the white and orange suits are present.

In Star Trek IV: The Voyage Home, some of the orange Rad suits appeared briefly in the Starfleet Command scenes and were worn by emergency crews.

The Rad Suits returned for Star Trek VI: The Undiscovered Country. Again, they were shown extensively in various Engineering scenes, but this time they also filled a special role. Modified Rad Suits were worn by two Enterprise crewmen who acted as assassins. Their suits were modified with a smaller gray collar which fitted under an all-new, very cool space helmet. Instead of the usual boots, they wore magnetic boots. Later, these same suits were found on board the Enterprise with pink Klingon blood. My specimen matches specifically to one of the assassins, complete with gray collar and blood stains. 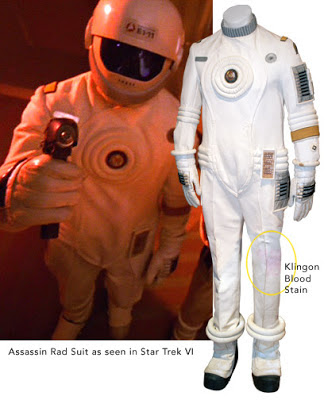 For some reason, later incarnations of Star Trek had no equivalent to the Rad Suit. Perhaps they felt that they got in the way of TV storytelling, or maybe by the 24th century (NextGen's era) radiation in Engineering was supposed to be more under control. But whatever the reason, when the Rad Suit concept was discarded, Star Trek lost a unique background element that added to the complex feel of the Star Trek Universe. 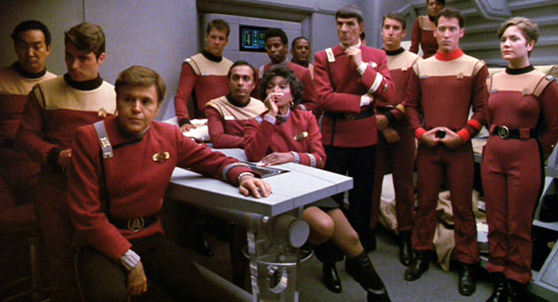 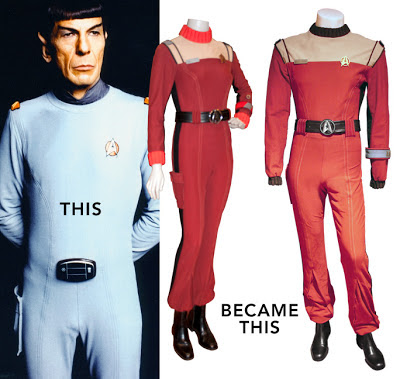 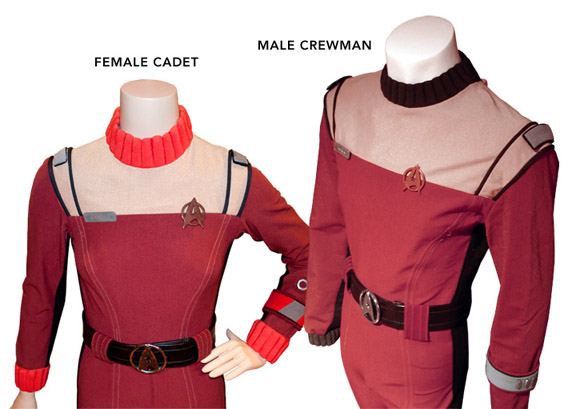 Often while I'm doing some mindless task in my studio (I'm a graphic designer) I have Turner Classic Movies on. I love old movies and I especially get a kick out of watching something for the first time. As luck would have it, a few weeks ago I was watching a 1951 Spencer Tracey movie called " The People Against O'Hara ". I had seen bits and pieces of this movie over the years but I had never seen the entire thing. And while I love Spencer Tracey, I have to say this is not a great movie. Not bad, by and means, but not great. Anyway, I was plugging away at some job or another and only half-watching the movie, when suddenly I heard a voice that I instantly recognized. My head shot up to the screen to see what was going on and there, There, in the middle of a scene, was a matronly-looking actress who I did not recognize. But she spoke with the familiar voice of a Star Trek character.

She spoke in the voice of T'Pau, the legendary matriarch from the TOS classic "Amok Time". Low and behold, it was none other than Celia Lovsky herself! She was playing an immigrant mother and was totally unrecognizable to me. Except for that voice. That unforgettable, distinctive voice!

Fast-forward to today. Again, I had TCM on and they were showing a 1959 film called "The Gene Kruppa Story" with Sal Mineo as Kruppa. Again, I had never seen it all the way through. Once again, though, I was jarred from my work by that familiar voice. Once again it was Celia Lovsky playing a mother – this time the main character's. It made me smile to see her yet again.

But that's not where the smiles stopped. This movie proved to be bursting with future Star Trek actors including:

I half expected Shatner and Nimoy to make an appearance!

I see Star Trek actors appear in old movies all the time. But I've never seen so many in one place!