FINALLY! BIG HINTS GIVEN FOR DISCOVERY CREW IN SHOOTING ANNOUNCEMENT

Star Trek: Discovery finally started shooting on January 24. On that day, CBS tweeted a congratulatory message that featured a heretofore unseen image. It features outlined figures in the midst of transporting. I think we can safely assume they represent the crew of the ship Discovery. We can see some Starfleet-ish boots, for instance, but most importantly, there's the Starfleet Delta patch that in the past would have represented only the Starship Enterprise. After all, in the original series (TOS) each starship had their own unique chest insignia and the delta represented only the Enterprise, not Starfleet as it would in later Trek incarnations after The Motion Picture. Here we can see that detail will be ignored. I think it's a good call because the delta shield has become ubiquitous with Star Trek. New viewers would just be confused if they didn't do it this way.

So what characters are represented by these outlines? Some are pretty easy to guess while others are strictly a shot in the dark. Take a look at my attempt: 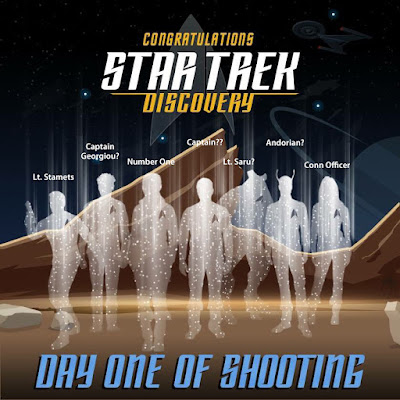 1. We know that the main character is the first officer or "Number One", played by Sonequa Martin-Green. I've designated her as the third figure due to her prominence in the foreground.

2. We've seen a make-up test photo, below, that appeared to be an Andorian with two slender antennae so I have assigned the sixth character as an unknown Andorian. I want to throw a caveat in, though.

The test shots we saw did not feature a style identical to Andorian antennae that we've seen in the past. So rather than Andorian, this could be the alien character to be played by Doug Jones, Lt. Saru. All we know is that his race has not been seen before in Star Trek. Perhaps his race is similar to Andorians like Vulcans are to Humans.

3. Lt. Saru might be the fifth figure which is VERY alien-looking. That's my vote and I'm super anxious to see how this character will manifest itself. We've never had a regular character that was exclusively CGI and this looks to be a likely candidate.

4. Anthony Rapp will play Lt. Stametsan, an astromycologist (ie: scientist). I've assigned him to the first slot. Seems to be a little phaser-happy.

5. Michelle Yeoh plays Captain Georgiou of the starship Shenzhou. We have no idea how she fits into the story but I have added her arbitrarily as the second slot.

6. Emily Coutts has just been cast as a Conn Officer. She's designated as the last figure.

7. Finally, we have no idea who the captain of the Discovery is. So I designated the fourth slot to him (it's a male outline) though for all we know the captain is a woman. No idea but I think it's a reasonable guess.

So for the first time we now have a sense of the crew, however vague. Several other characters have been cast, most notably Spock's father Sarek to be played by James Frain as well as several actors as Klingons who will apparently be playing a significant role in the story.

Since shooting has begun, I hope some behind-the-scenes stuff starts to appear. I'm anxious to see the uniforms as well as the new props and sets that have been created.

While I'm still not sanguine about the whole "CBS All Access" thing, there's nothing to be done about it. The first episode will be airing on regular CBS network channels so at least we can get a taste before buying. Heck, I'm hoping I like it so much that I won't care about the cost!