"SCREEN USED" PHASER NOT WHAT IT'S CRACKED UP TO BE.

Recently, there's been a Star Trek VI-style Assault Phaser on Ebay that has been identified as "screen-used". It was originally priced at $3950 and didn't sell. It was then dropped to $3250 and still didn't sell. It's now been relisted at $2500. Here's one of the item's auction photos: 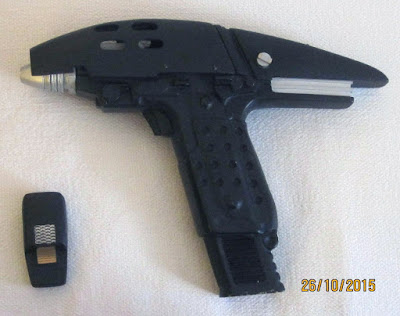 Sometimes it's hard to tell the difference between a replica and a production-made screen-used piece. But because this prop is so well-documented in its various versions, this time it's an easy call to make. Unfortunately, it's my considered opinion that this is definitely NOT a screen-used piece but rather a replica made by someone named "Wakal" about 15-20 years ago. Owners of Wakal pieces have informed me of this along with shots showing their identical nature. Also, I own a screen-used hero-style fiberglass version and have also studied the background solid resin versions of this prop over the years. Here are the key "tells" – details that identify it as a replica.

1. No interior detail under the cutouts. There should be a "corncob"-textured piece inside the front cowling that should be visible through the cutouts. Here's a comparison of the auction piece and a screen-used piece:

There's something in there but it's not remotely correct. The Wakal did not come with this detail.

2. Excelsior Tag on the handle base is incorrect. On the left is the auction piece and on the right is a shot of a screen-used piece from "The Art of Star Trek". The piece shown was supplied by Greg Jein, the propmaker who actually worked on the film and made these props: 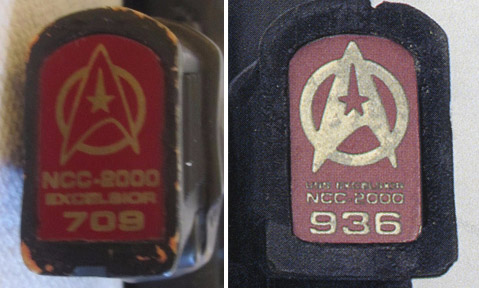 The auction piece appears to have a plastic plate while the screen-used is an etched metal plate. Also, the Starfleet emblem is reversed out incorrectly and the order of the ship's name and number are transposed. It exactly matches the Wakal.

3. LED detail on back cowling is incorrect. The screen-used versions were flat translucent plastic. The auction piece shows a definite ribbing and appears to be painted.

.
4. The description says it is "solid resin" but has a sliding cowl and supposedly a removable magazine. The resin pieces were background dummies and weren't detailed in any way – they were solid monolithic pieces. The fiberglass heroes (detailed pieces for close-ups) had a different mix of details and were hollow. The trigger shown is neither a resin version nor a fiberglass hero. But it does match the Wakal.

6. The various details on the sides of the body appear to be molded in place. That would have only happened on the static resin background pieces which would not have had any moving or removable parts.

Here's a shot of a Wakal replica (top) from collector Ethan Williams (thanks Ethan!) compared to the auction piece (bottom). Ethan's is an Enterprise version but they are the same otherwise. Note the name plate's details, the ribbed cowling detail (painted a different color) and the P1 match. 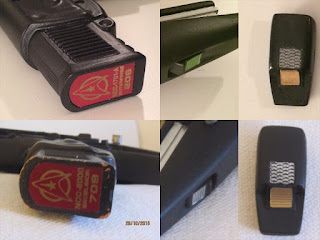 I think this shot is conclusive when taken with everything else. It's my opinion that this was cast from a true production-made piece (an opinion confirmed by others who own Wakal pieces) which is why it is so accurate in many key ways. As for the differences, most replica makers actually build in differences ("tells") so that their version could not be confused with an actual screen-used piece or any other replica. I believe that to be the case here.

The piece comes with a COA from "Globo Associazione" based in Trieste, Italy, and states that it came from "Paramount Pictures Props/Costumes Department" and was "bought directly from Viacom". If that's true then somebody ripped them off because it's my opinion that this piece never saw a film studio.

Bottom line B: if this piece were real, I would have already bought it! It would easily be worth the asking price. But it's not.