Fight of the Century! Shatner Vs. The Gorn! "Antimatter Boom in the Living Room"!

It's been 46 years since Captain James Kirk first took on the lizardly Gorn in the Star Trek original series episode "Arena". But wait, what's this? The Gorn has returned for another showdown with our favorite captain? Awesome!

I just spoke with Michael Doyle, head of consignments at Julien's who personally pursued this piece over the past two years. He told me that Reuban Klamer, the original toymaker whose company built the rifle, has been in possession of the piece since it left the studio in 1966. Any claim by actress Sally Kellerman to be the owner is completely false. Mr. Reuben is still alive and is the consignor of the piece.

Which makes this absolutely, definitely, without a shadow of a doubt THE one and only, original Phaser Rifle! 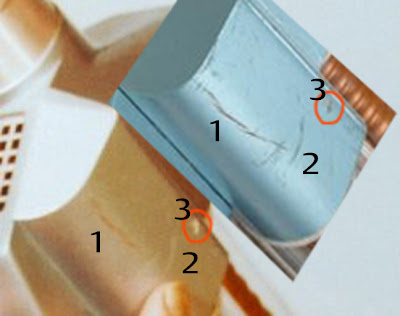 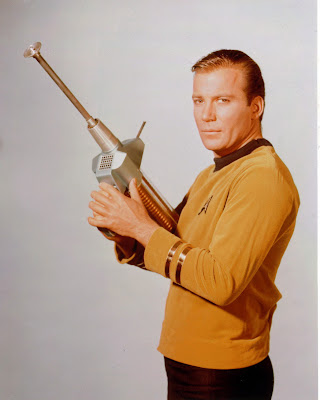 In Star Trek lore there are plenty of iconic pieces to collect – phasers and tribbles, communicators and uniforms, as well as the various incarnations of the Enterprise itself. All of the original versions of these items – original props, costumes or models – are all highly collectible. And while there are some one-of-a-kind pieces out there, like the original Enterprise shooting model, most pieces were made in some kind of quantity, however low. True phaser pistol props are rare, but there's more than one. Same with comms and, of course, tribbles. Lots and lots of Tribbles. 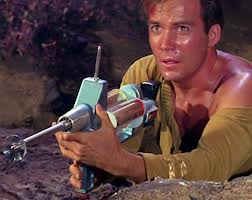 But one piece was made for the original pilot episode "Where No Man Has Gone Before" (actually the second pilot, but that's another matter) and was never seen thereafter – the infamous Phaser Rifle. Infamous in that it was a cool prop used by Captain Kirk himself in one of the best stories in Trek history, but its whereabouts have been unknown ever since it was last seen on the set of Star Trek in 1966. The famous Christie's Star Trek auction of 2006 sold off more iconic screen-used Trek material than at any other time in the history of the franchise, but the best they could do for a Phaser Rifle was a nice replica. 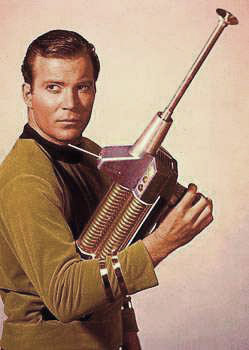 With that in mind, imagine how floored I was when I read  that Julien's auction house would be auctioning off the one and only ORIGINAL Phaser Rifle! The auction listing states that the rifle was made by toy designer Reuben Klamer for Gene Roddenberry at no charge, "in exchange for potential licensing rights". The prop rifle was featured heavily in the Shatner Star Trek pilot "Where No Man Has Gone Before" and was widely used in various PR shots for the new series. Then, the prop was evidently returned to Klamer, never to be seen again.

Until now! The auction shows several pieces of paperwork with correspondence between Roddenberry and Klamer, as well as some great photos showing the piece "behind the scenes". There's even an original sketch. This all makes for a very compelling story in support of its authenticity. The piece looks to be in beautiful condition and was apparently stored all these years in a custom-made case that was originally used to transport it to the set and keep it safe. 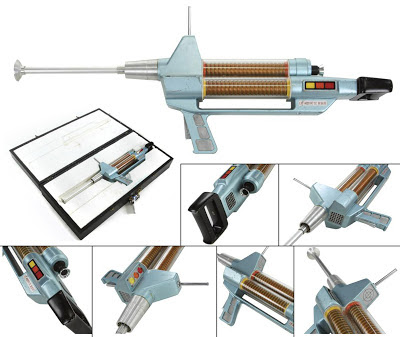 I want to note that for years, actress Sally Kellerman, who appeared in the pilot with Shatner, claimed to have the rifle prop and that it was given to her by the prop man on the set. That now seems even more unlikely than it did when I first read about it. I'm not getting the sense that she's the consignor, but we'll see.

I can't think of a more important Star Trek piece to resurface since Chistie's auctions. While the Galileo shuttlecraft find was cool, the piece was in such awful condition that it can now scarcely be considered to be original. But this looks to be in similar condition as when it was last in Shatner's hands those many years ago. It shows some definite wear and tear but it's all there. And it's a hand prop, which means you don't have to have a garage in which to house it. And it's a Phaser Rifle! THE Phaser Rifle! Infinitely cool!!!

The estimate of $50,000 to $70,000 might seem high, but not for such an important piece, in my opinion. I would not be surprised to see it go for more. MUCH more! If there's such a thing as a priceless Star Trek piece, this is it.

This announcement has to get the juices of flowing of any fan or collector of The Original Series. It's one of a kind, it's in original condition and it will have a new owner soon! Great stuff!

The auction catalog can be viewed at Juliens.