So the other day I'm watching yet another old movie on AMC, this time a little-known John Wayne movie from 1953 called "Trouble Along The Way". It's a movie I've seen several times before and always enjoy. It features The Duke in an unusual kind of movie: a RomCom. That's right, America's hero, John Wayne, in a romantic comedy with Donna Reed, the great Charles Coburn and, as The Duke's daughter, a young girl named Sherry Jackson.

In the countless times I'd seen the movie, I had never noticed the actress' name before. And I recognized it instantly. An actress with that name played the character of Andrea on the classic Star Trek TOS Season 1 episode "What Are Little Girls Made Of?". And here was a girl who was 10 years old in 1953 with the same name. Could it be?

I grabbed my iphone and opened my IMDB Ap (hey, I'm a classic movie nerd, what can I say?), typed in the film and there it was – it was the same actress! Here she was in beautiful black and white  as the precocious daughter of John Wayne's football coach character. And she wasn't just in the movie – she was one of the main characters! I had always enjoyed her performance but now it took on a new aspect. I watched with a new-born interest. She was great! 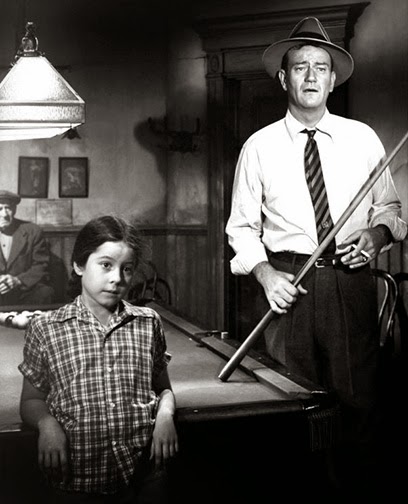 Here's Sherry with her daddy, The Duke himself, John Wayne! 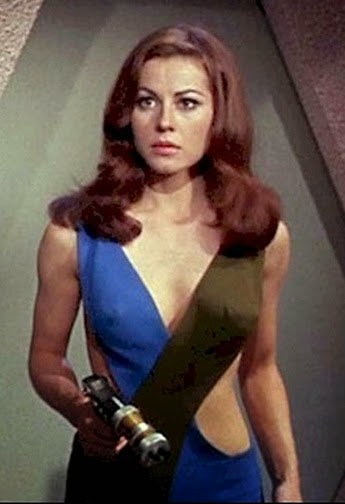 And here's Sherry as the android Andrea in "What Are Little Girls Made Of?"

Between "Trouble" and Star Trek, Sherry did a lot of growing and in all the right places! Her performance in Star Trek was very reined in and rather wooden. But it had to be – she was an android, after all. But her performance in "Trouble" really showed off her acting abilities. She holds her own with an all-star cast of Hollywood greats. And "Trouble" wasn't her first film. She began four years earlier at the age of six!

Sherry Jackson is one of those actresses that connects us to Hollywood's golden age actors like Wayne, Reed and Coburn. Though no longer acting, Ms. Jackson is alive and well, and I for one am grateful for her great turns in both Star Trek and "Trouble Along The Way". 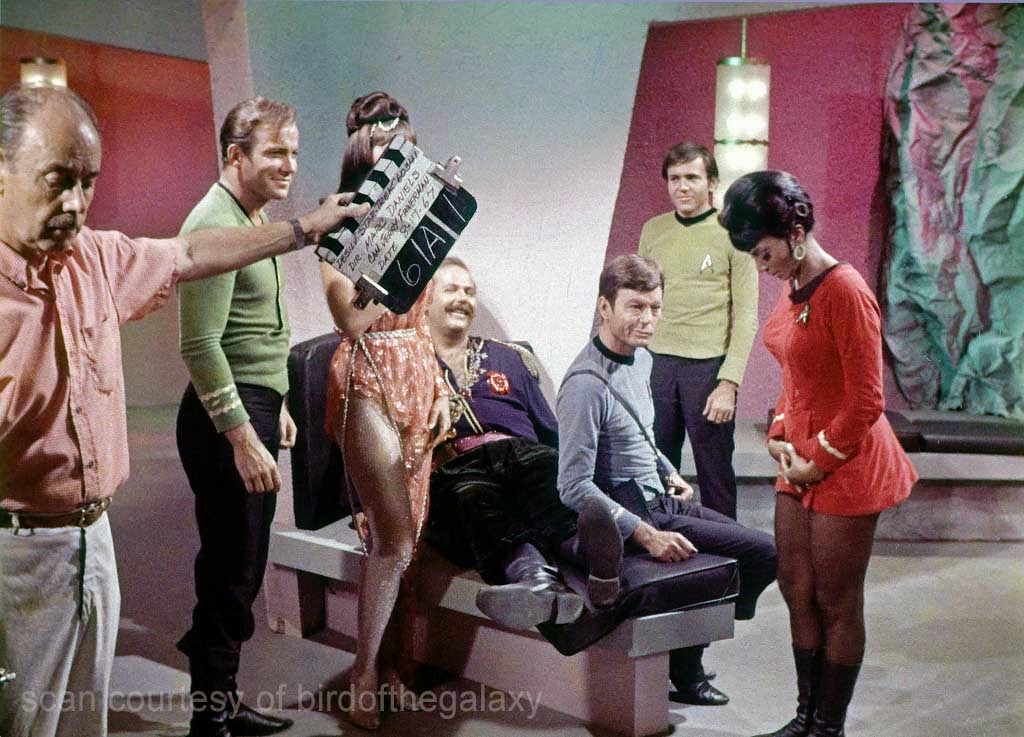 NOW THAT IS MOTIVATION!

One of my favorite "faux-tivational" posters: 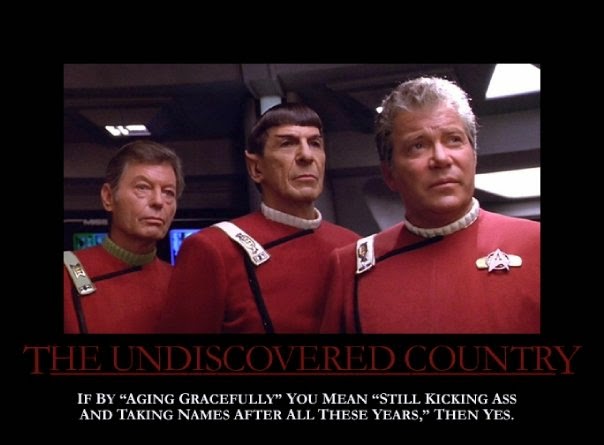 CAPTAIN AMERICA SOARS: WHAT PARAMOUNT COULD LEARN FROM MARVEL

I make no bones about the fact that I hate JJ Trek. If you like it, good for you. I wish I was in your shoes, because I'd love to have a Trek movie that delights me. These don't. I consider them lousy movies, period. 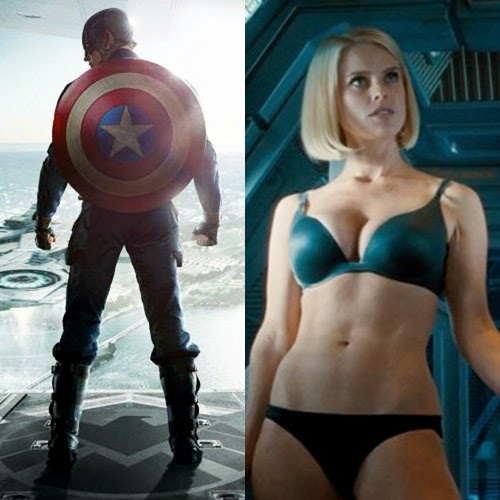 That said, this past weekend, I joined millions of other moviegoers and saw "Captain America: The Winter Soldier", the latest comic book-based film from Marvel Studios and parent company Disney. It was a thoroughly enjoyable movie in that it was what it needed to be – a comic book brought to life on film. The story was solid, the acting excellent and the effects were cool without being overwhelming (overwhelming as defined by "Transformers", for instance). It was wryly funny and deadly serious, both as needed. I loved it.

As I did with Star Trek, I grew up with comics. Captain America was one of those constant superheroes that I'd occasionally buy but that I also saw in "The Avengers" and other Marvel titles. The Cap got around. Unlike Star Trek, however, Cap needed to wait until very recently to become translated faithfully to the big screen. Yes, attempts were made in the past, but they were so awful that I won't even waste my time on them. To me, they simply don't exist.

Comic book movies needed CGI in order to fully realize their true potential. Whether you're talking about Spidey swinging down Fifth Avenue, or Cap fighting the Red Skull in a huge bomber heading for New York, CGI enable us as moviegoers to be fully – and realistically – become immersed in the fictional worlds of out heroes. When comic book movie makers remember that at their core, a CB movie must be about interesting characters doing remarkable things, great things happen like "The Avengers" and "Winter Soldier". When they forget that and rely on the CGI to hold the audience in thrall, we get "Green Lantern". While I don't think GL is as awful as a lot of people, it ain't great, that's for sure. Oh, and when you don't care at all, you get "Catwoman".

So far, beginning with 2008's Iron Man, Marvel has done an outstanding job of delivering good (or great!) CB films, all of which build on the previous ones in a very synergistic way. The "Marvel Universe" is literally being transferred to the screen, one film at a time.

So what's this got to do with Star Trek? Everything. Marvel films are made by people who understand comics. They know who Cap is and what makes him tick. They understand why he is a character that has endured for 75 years, and they bring all that knowledge and understanding with them into the big-screen incarnation.

On the flip side, Star Trek is now being made by someone who says "it always felt too philosophical to me". Too philosophical. Too thought-provoking. Too intelligent. Well, Mr. Abrams, you've certainly taken care of that. No one would ever accuse your movies of being too smart.

Note to producers: if your director says Indiana Jones movies are "too action-packed" or James Bond films are "too British", maybe you shouldn't hire them for those franchises because they obviously don't understand them.

Star Trek has never been a franchise with its heart in the action movie genre. It is adventure – a very different thing. Yes, there are actions scenes in every Star Trek episode and movie. Action is an important element of adventure, after all. But Star Trek – the BEST Star Trek – is first and foremost a morality play. "Wrath of Khan" featured Khan as Ahab, who would not rest until he pulled down his Moby Dick in the form of James T. Kirk. "City on the Edge of Forever", one of (if not the) greatest Trek episodes ever, is about lost love and responsibility. Friendship is a recurring Star Trek theme, as is duty and the desire to know the unknown. None of these themes gets anything but lip service in JJ Trek. It's all about the loud, stupid, over-done, all-consuming, illogical, unneeded ACTION. And nothing else. There are no emotional connections with the audience, because explosions don't care.

All the great screen writers I've read about all said the same thing – they write a movie they'd like to see. So apparently JJ Abrams and pals don't want to see a smart Star Trek film. They don't want to see Star Trek that doesn't tread on old tropes. They FIRMLY want to go EXACTLY where every Trek has gone before – in a cliche and silly way – without injecting a single original idea along the way.

"Captain America: The Winter Soldier" works because it is true to its comic book roots. It understands how best to tell the story of the man out of time.

2009's "Star Trek" and last year's "Star Trek: Into Darkness" fail because they ignore the soul of Star Trek – a great story about ideas told by characters who care about each other.

So to Paramount I say this: you don't have to reinvent the wheel to be successful with Star Trek. But you sure need to know that a wheel is round. Marvel gets it. Maybe you could, too.

I'm putting you on notice, Paramount. You've used up the last of my good will (and that of millions of other Trek fans, I think) with the abortion of STID. I won't be suckered in again. For any future Trek movies I will wait until I hear something from trusted sources. If it is positive, only then will I give it a go. You've fooled me twice. I won't be had again.