BEN STILLER LETS HIS TREK FAN-BOY FLY, OWNS UP TO OWNING THE ORIGINAL GORN AND MORE!

I broke my hand a couple of months ago and I am finally able to type once again. I've been away for far longer than I would have liked but I hope to get back into a more regular cycle of stories now that I'm on the mend.  – D

Nerds are everywhere today, including the hallowed halls of Hollywood. Comedic actor and film-maker Ben Stiller has been known as a Trek fan for many years, having even been given a small cameo as a Romulan in 2009's Star Trek. But that was just the tip of the iceberg. Stiller recently appeared on Nat Geo's "Startalk" where he admitted to host Neil deGrasse Tyson that he was not only a life-long Star Trek fan, but that he also owned some key props and costumes from The Original Series. 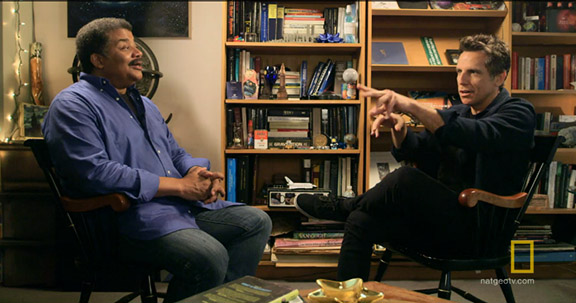 Stiller first confesses that he owns a copy of the Star Fleet Technical Manual which establishes some major Trek cred. After all, only die-hard fans actually have the book, right? But then he goes on to mention that he used some TOS goodies as props in his movie Tropic Thunder.

In Matthew McConaughey's character's office, a couple of iconic things can clearly be seen – if you're looking at the right place. Check out the lower right of this screen grab:

That's right: a Gorn head! And not just another copy, no, sir. That's one of the two original Gorn heads created for the TOS episode Arena! But wait – that's not all. Later in that same scene, another piece of familiar Trekabelia can be seen right smack in center screen

Yep. Spock ears. Season 2 versions, according to Stiller. He bought both items at auction along with a pilot episode Spock tunic. No idea which pilot he was referring to – The Cage or Where No Man Has Gone Before – but either would do nicely!

To top it off, though, Stiller says that no less than Leonard Nimoy himself spotted the ears in the movie and spoke to Stiller about them. After admitting that, yes, they were real Spock ears, Nimoy asked for Stiller's address. He then sent Stiller another set of ears from The Motion Picture. A personal gift of Spock ears from Nimoy himself. It doesn't get any better than that. And you can see in Stiller's face that he was truly moved by the gift, as would be any true Trek fan.

What else might Stiller own? Who knows? But he's definitely on my radar from now on.

Every so often, a so-called "Monster Maroon" uniform as seen in Star Trek II: The Wrath of Khan comes to auction. As a fan of these great pieces, I look forward to these with particular anticipation. Usually they are the real deal because they are incredibly difficult to fake and a knock-off sticks out like a sore thumb.

Which brings me to this offering from Heritage:

"An Extra's Jacket from "Star Trek II: The Wrath of Khan." Paramount, 1982. Red cotton, collarless, black and gold piping, gold-metal emblems attached on shoulder strap, chest and cuffs, no labels present; likely worn by an extra as it's similar but not identical to the uniforms worn by the main cast members."

So it is "similar but not identical to the uniforms worn by the main cast members". Which makes it, by their definition, at least, an "Extra's Jacket", which totally makes sense except for one thing. There were no "extra" or "background" versions of the officer's jacket in these films. Every jacket we ever see is a full-blown version, identical in materials and construction to those worn by the main cast. How do I know that? Because I know more about these pieces than just about anyone alive (go HERE to see what I mean). I have done exhaustive research over the years. I have owned many specimens, both main cast pieces and background pieces. I know many others who own various specimens and they have shared their insights with me. I have a database that has tracked every version sold over the last fifteen years. They all have one thing in common – they are all made the same way with the same level of detail. In short, they are all "hero" versions. There is no secondary, lower-level "background/extra" version for one simple reason – money. When Wrath of Khan was made, the production was under very tight budgetary constraints. So very few actors outside of the main cast even wore the officer's maroon uniform. Those few that did, show them to be identical in every way to the main cast versions because they are on screen with the main cast so they had to match.

The shoulder straps on all production pieces, for instance, were all the same design. Heritage's is different and doesn't even have a clasp! A background piece shouldn't be as elaborate as, yet different from, a production piece. That makes no sense. It has a different gold braid. Why? It's thicker and gaudier. Why? And in the dozens and dozens of straps and jackets I've seen over they years not a single one was missing the clasp. Not one. In the image below, the far right shot shows an actual extra's strap (from Wrath of Khan). This is the only extra ever seen on the bridge throughout the film, and only one of three extras shown wearing a maroon in the entire movie. Note that it has the clasp and the thinner, darker gold braid.

The heritage piece is described as being cotton, which would have stood out like a sore thumb against the wool versions worn by everyone else. The wrists on production pieces all show the same trapunto (or quilting) detail with stitched rings in all cases (the Heritage piece has none). The admiral wrist braid was of two particular designs, neither of which match the Heritage version.

So, in short, while the Heritage version appears to be a WOK jacket at a glance, it quickly falls apart under scrutiny. Their main claim of "extra" usage is not supported by the facts, but is a claim commonly used to support a piece because, as such it wouldn't have to match the "hero"versions. Very convenient, and unprovable as it is circular logic – "It's a background piece that you can't see very well, which is why its details are different and you can't confirm it because it's, you know, always in the background". Riiiight.

I say there were no "extra" versions, ever, and that supposition is supported by years of research, not guesswork. If someone has information to the contrary, by all means please pass it along to me. I live to learn.  But I think I'm on pretty solid ground here.

I contacted Heritage with my concerns and this was their reply:

Please see attached photos where background actors are wearing similar jackets to the one Heritage is offering in our upcoming November 12th auction.  I’ve spoken to the consignor of this piece and he obtained it directly from Paramount Studios a number of years ago. He’s “in the business” so it makes sense he would have this costume piece. It is not a fan made piece as you speculate below.  It is actually quite well-made and detailed if you could see it in person.  It was worn by one of the background actors probably in the scenes I’ve attached here – it was not worn by one of the main actors and is not a “hero” piece.  Hopefully this addresses your concern.

The scene she refers to is this shot from Star Trek IV: The Voyage Home :

The only problem with that theory is that several of those maroons shown were later sold at auction and were the same as all the other versions. They were no different from the main cast uniforms in any way. And we know that they reused jackets from earlier films over and over so that they didn't have to go to the expense of making new ones, especially for bit players. All trek films had super-tight budgets. These are facts, not guesses.

Regarding the Paramount mention, it's actually possible that this is a Paramount copy created for things like the old Star Trek Experience in Las Vegas. They created copies of many Starfleet uniforms and various aliens for those venues. Perhaps this is one of those. It would actually explain the missing clasp. I suspect there might be Velcro under there in place of the clasp which is commonly used on theater costumes to make them easy to take off and on. But who knows?

So here's the bottom line on this piece. It is either:

1. A rare, never-before-seen "extra" version which has never, ever been shown or proven to exist

2. It's a very nice (though inaccurate) copy.

Guess which one I'm going with? I'll let you decide for yourself as to whether or not this piece is what they claim. But here's some additional food for thought.

This piece has been up for auction for weeks and has not garnered a single bid, despite have a very low opening number. If this were real, I know of any number of people who would be hot after it, myself included! Yet there it sits, languishing in loneliness. Which is what it deserves, after all. Heritage needs to up their game, especially on something as simple as this. It makes them look like fools in this writer's opinion.

Don't be fooled by fools.