IF YOU COULD OWN YOUR FAVORITE STAR TREK PROP, WHAT WOULD IT BE?

That's the question recently posed by a Star Trek Facebook page. Then, fellow Trek collector and blogger C.J. Bunce took it upon himself to sort through all the hundreds of responses which naturally covered all aspects of Star Trek. He then posted the results of his analysis on his blog at Borg.com. His Top 10 tells us about those pieces that really resonate with readers, and, as a by-product, tells us what version of Star Trek connects most with them as well.

I won't give anything away, but catch the entire story HERE. If you're a prop fan you're bound to like some choices while some others, well, not so much. What is most interesting to me is that my personal answer to the question turned out to be the Number One piece, which surprised me a great deal. I didn't know so many other fans had such great taste!

Check out the story for yourself and answer borg.com's question: what would YOU pick?

MEET THE DEATH STING, THE OH-SO-AVERAGE KLINGON WEAPON THAT REALLY GOT AROUND.

FYI: I'm right in the midst of selling my home and buying another so it's tough to find time to Blog. But once everything settles down, I'll be back on a more regular schedule. Thanks for sticking around!

I recently got a call at 2 in the morning. Usually those calls do NOT go well, but this time, thankfully, it wasn't a tragedy. Far from it. A friend was on the line and simply asked one question: "Hey Don, do you want a Death Sting? There's one on Ebay right now." I was glad I answered!

Now, when most Trek fans think of cool Klingon weapons, several things might come to mind: Worf's famous Bat'leth, The painful-looking D'k Tahg knife used to kill Kirk's son, or even Kruge's pistol from Star Trek III.
But what you probably DON'T think of is a rather tame-looking pistol called the "Death Sting", whose name sounds far deadlier than the actual weapon appears to be. But it's rather tame appearance notwithstanding, The Death Sting really got around. It made it's first appearance in Star Trek: The Motion Picture as a holster-filler for the barely-seen Klingons. And if the Klingons were barely seen, their pistols were almost non-existent. You can just barely see a handle sticking out of the only Klingon that we see with a holster. A rather dubious – and boring – beginning.

The next time we saw the Klingons was four years later in Star Trek III: The Search For Spock, in which the Death Stings were strictly holster-fillers. In their place was the far cooler-looking Klingon Disruptor as wielded by Captain Kruge and his crew. They were far more interesting than the Death Sting and came in both pistol and rifle varieties. Was the Daeth Sting gone for good? Not even close.

Three years later a little something called Star Trek: The Next Generation came along. Though it was a new production, Next Gen inherited all the costumes and models from the earlier Trek films. And the props. So when an episode came along that required a bunch of Klingons, what better to use that the already-existing Death Stings? Unlike the Star Trek III Disruptors, the Death Stings had one big advantage – they fit nicely into a holster. The clunky boxy end of the Disruptor was constantly snagging on things and never cleanly fit into a holster, But the long, thin taper of the Death Sting offered no such problems. 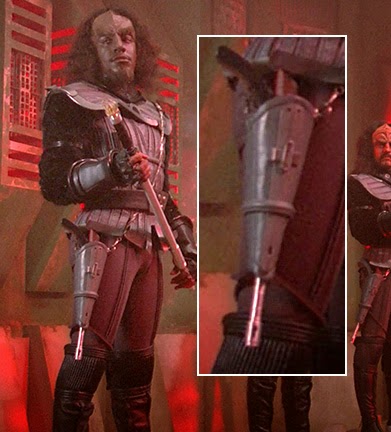 In the Next Gen Season Two episode, "The Icarus Factor", a group of (holographic) Klingons make an appearance in full Klingon regalia, including – ta-da! – holsters filled with Death Stings, now repainted in the familiar Klingon rust-color that would become the standard for all props Klingon. Whether these were re-painted Motion Picture versions or newly made versions is unknown. But the evidence is clear that they are of the same design. Unfortunately, they are once again hidden in holsters.

The Klingons would return to film in 1989's Star Trek V: The Final Frontier (a film so bad you might have wiped it from your memory – I completely understand). This time, they would actually get pulled out and shown off a little bit. Finally we got a view of the weapon.

And boy was it boring.
According to prop makers of the day, the Death Sting's simple form was a product of being made from existing toy guns. It was comprised of four basic hollow parts which were simply glued together, painted and stuck into a holster. It was an incredibly generic (ie: non-Klingon) weapon. But it existed which saved money on new props and money was ALWAYS an issue in Star Trek production. So the colors were changed from The Motion Picture version and, voila, new Klingon pistols.

To get back to that 2 a.m. phone call, I did get online and after checking out a few things, bought it right away. It was offered by a former Star Trek prop maker, which greatly simplified things for me. Here's a few shots of my version: 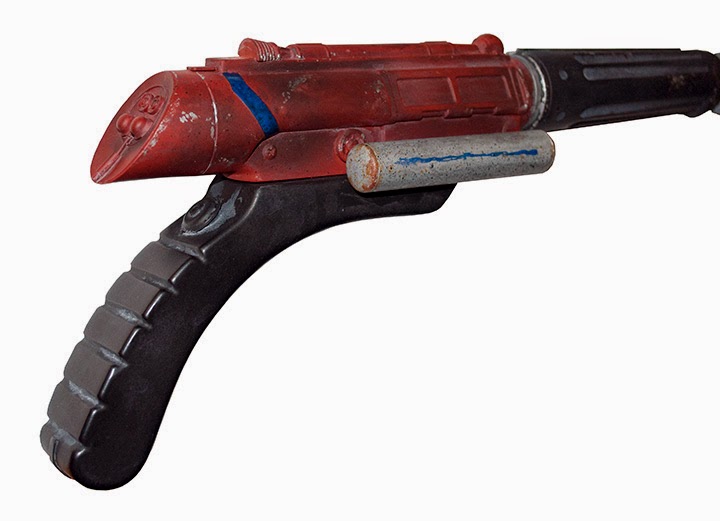 Mine is hollow and shows a silver/gray paint beneath the rust brown, leading me to believe that this may well be an original Motion Picture version that was repainted for Star Trek V (and later) use.

The Death Sting would appear throughout Next Gen and would also show up later in Deep Space Nine and Voyager, albeit in modified versions. The original Motion Picture version had a different handle detail than later versions. They were also hollow and lightweight as opposed to the later ones being heavy solid resin. 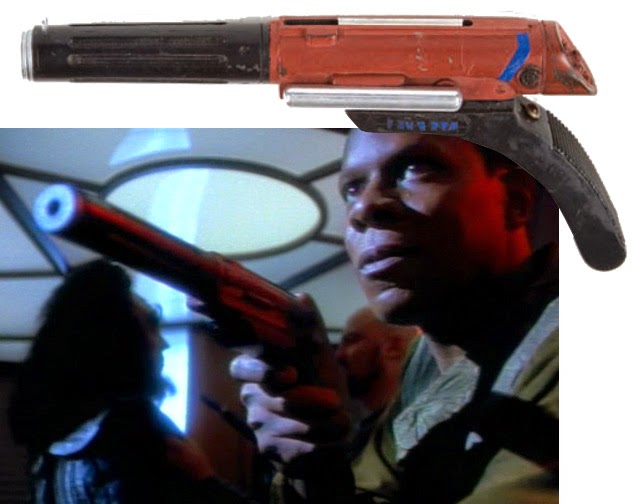 This version has lost the extended metallic muzzle and has Klingon letters on the side. It also has a slightly different paint job. Because they began with such a generic design, they were easily used as the "gun of the week" and could easily be put in anyone's hands in any given episode. They just didn't stick out and so could hide in plain sight.

I don't want you to think that I'm not glad to have my Death Sting because I'm absolutely happy to have one. I've actually been looking for one for years. While it's generic nature doesn't set the world on fire, it's still a great signature piece and as a collector of Klingon weapons, I'm thrilled to have it. My collection wouldn't be complete without it.

So there you go. The average-looking Klingon weapon that had an above average number of appearances in various Star Trek incarnations for more than 20 years.