THE MARKET SPEAKS: EVEN WALL STREET THINKS STAR TREK IS MOVING IN THE WRONG DIRECTION

This is really the first sign that I've seen that supports my theory that, while a lot of people went to see Star Trek Into Darkness, a lot of those viewers didn't actually like it based on worldwide box office and DVD sales, specifically when compared to 2009's Star Trek. So, apparently I am not alone in my disdain.

As a matter of fact, investor Tim Beyers, a member of the Motley Fool Rule Breakers stock-picking team. expressed that and more:

Only time will tell. I hope that I'm wrong about Mr. Orci, but I have no reason to think that I am. For Star Trek 3 to truly succeed – ie: appeal to non-fans while bringing back jaded fans like myself – he'd have to do a complete 180 in terms of story-telling, and I don't think that's likely.

It's no secret: I didn't care much for the 2009 Star Trek and I downright DESPISED Star Trek Into Darkness. One of the key reasons for my views was what I felt to be lousy, lazy, uninspired writing. And one of the writers responsible was Roberto Orci. Along with Star Trek, Orci has also been a writer for such scintillating hits as The Island and Transformers 2, as well as the tepidly-received Amazing Spider-Man 2. As for directing, he's done none. Zippo.

So with that amazing resume, the powers-that-be at Paramount – who have proven that they no longer have any understanding about their own Star Trek property – decided that Orci would be ideal to bring the next Star Trek film to theaters. I thought things were bad enough when J.J. "I love lens flares more than content" Abrams was in the director's seat. But this time 'round he's strictly producing, so he's called on his go-to guy, Orci. You can read all about it HERE.

If you're a fan of Orci's work, then you're in luck and I'm envious of you. As for me, I was hoping for new blood for Star Trek 3, but since that's not to be I have NOTHING to look forward to (until CBS remembers that Star Trek is supposed to be a TV show and gets on the stick). I have no reason to think that the next Trek won't be more of the same crap that Orci and company dished out to us before. I know the story will be derivative, silly and as far from what I consider to be Star Trek as it is humanly possible to get. It will be really complicated and ultimately make no sense.

It should be noted that when Orci was met with criticism of Into Darkness on Trekmovie.com, he maturely replied with this:

"STID has infinetly [sic] more social commentary than Raiders in every Universe, and I say that with Harrison Ford being a friend. You lose credibility big time when you don’t honestly engage with the FUCKING WRITER OF THE MOVIE ASKING YOU AN HONEST QUESTION. You prove the cliche of shitty fans. And rude in the process. So, as Simon Pegg would say: FUCK OFF!"

So Orci's idea of engaging with Star Trek fans is "fuck off". He could have said nothing or he could have been diplomatic. But instead, he went straight to DefCon 1 and the nuclear option.

As long as these clowns are in charge of Trek, I'll never spend a nickel on a ticket or DVD. Paramount has fooled me twice. now. And while I'm not the brightest guy in the room, even I get it after that many slaps. Maybe there will be a Star Trek down the road that doesn't insult our intelligence by telling us that "cold fusion" has something to do with making things really, really cold, or that Khan is LITERALLY Superman with super-strength and the power of flight.

If you liked Star Trek Into Darkness, then good for you, you're entitled to your opinion and you certainly weren't alone. Sometimes we forget that these are just movies and not a cure for cancer.

Though apparently, now you can use Khan's "magic blood" to cure that!

If you liked Star Trek Into Darkness, then good for you, you're entitled to that opinion and you weren't alone. It's good to remember that a movie is just a distraction from other things in life sometimes - it's not oxygen. - See more at: http://www.theshiznit.co.uk/feature/the-5-million-dumbest-things-about-star-trek-into-darkness.php#sthash.bR24PJEG.dpuf
Posted by Don at 10:09 PM 2 comments: 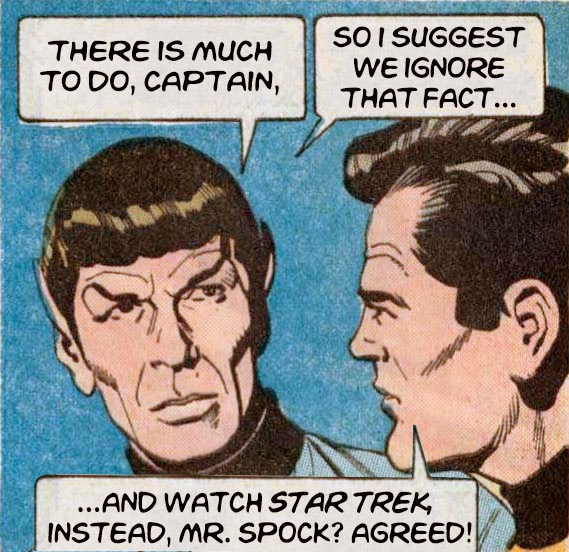 Everybody's favorite starship captain (well, at least MY favorite) picked up a cool piece of NASA hardware this week. The Star Trek star was awarded the Distinguished Public Service medal, the space agency's highest award for civilians, according to CBS news.


Apart from his Star Trek duties, Shatner has been a vocal advocate of science education and space exploration.

"William Shatner has been so generous with his time and energy in encouraging students to study science and math, and for inspiring generations of explorers, including many of the astronauts and engineers who are a part of NASA today, " David Weaver, NASA's associate administrator for the Office of Communications at NASA Headquarters in Washington, said in a statement.

"He's most deserving of this prestigious award," Weaver added.

Shatner accepted the honor last Saturday evening, April 26, at his Hollywood Charity Horse Show in L,A., an annual event in which he raises money for children's causes, NASA officials said.

According to the medal's citation, Shatner was honored for "outstanding generosity and dedication to inspiring new generations of explorers around the world, and for unwavering support for NASA and its missions of discovery."

Shatner has been an informal spokesman for NASA, especially in recent years. In 2011, Shatner beamed a wakeup call that recreated his "Star Trek" introduction to NASA astronauts working on the shuttle mission, STS-133, the final flight of the shuttle Discovery. The next year, he recorded a message for the real-life spacemen living aboard the International Space Station. And to help drum up excitement for NASA's Curiosity Mars rover, Shatner narrated a video about the robot that was released just a week before it landed on the Red Planet in 2012.