SINCE CBS DIDN'T GIVE US A 50TH ANNIVERSARY SPECIAL, LET'S WATCH THE 25TH AGAIN

While it was nice to see a couple of Star Trek 50th Anniversary shows appear on History Channel and The Smithsonian Channel, there was no "official" celebration on CBS and Paramount, the actual owners of Star Trek. In light of that, let's watch the 25th Anniversary special that was originally broadcast on September 28, 1991.

It was a simpler time!

Everybody's favorite actor, Tom Hanks, is also a Star Trek fan as evidenced by his various Trek insider comments over the years. Here's his latest where he talks about his "greatest day in Hollywood":

CELEBRATE YOUR LOVE OF THE ORIGINAL SERIES: A FIVE-FOOT ENTERPRISE CAN NOW BE YOURS.

If you've always wanted a really big version of the original Enterprise, well, you're in luck!

A number of years ago, a company named Custom Replicas created a huge model of the Enterprise. And by huge I mean it was 66 inches long! That's roughly half the scale of the original filming model which was 11 feet long. Only a handful of these models were assembled, painted and finished, and one of those is now available. Click on the photo, below, to see this baby in all its glory! 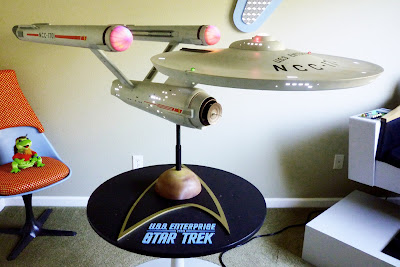 This will soon be sold at auction (more to come as details are known). Keep in mind that these things were incredibly pricey to begin including the cost of the original model, having it built and wired for light, then painted and put on display. It is beautifully detailed and looks like it could take off for the stars at warp 9!

This is a really cool piece that I hope will find a good home with another devoted Star Trek collector. When the auction details are known, I'll post a follow-up. I'm not involved in this transaction in any way. I'm just a fan of this great model!

MY OBSESSION WAS BORN FIFTY YEARS AGO TODAY. HERE'S WHY IT STILL MATTERS.

Star Trek was born on September 8, 1966, with the airing of the first ever episode "The Man Trap". Now, I'm not one of those people who claim that the heavens parted and their lives changed forever after that first hour of Star Trek was over. There's a good reason for that: I was simply too young to watch it, let alone be moved by it. No, my obsession didn't start until years later when I could actually think and read and stuff like that. Star Trek hit me right between the eyes when I discovered it being shown every afternoon at 6 on my local Kaiser Broadcasting station (Channel 61, Cleveland!) in the early seventies. While my parents watched Cronkite, I watched Kirk. And watched, and watched and – well, I'm still watching! 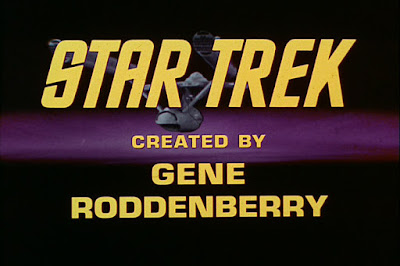 Why is a fifty-year-old TV show meaningful today? First of all, it's still relevant because of the simple fact that everybody knows what Star Trek is. Even after half a century, it endures. The longest period of time between Trek productions was the 10 year stretch between the original series ending in 1969 and the release of Star Trek: The Motion Picture in December of 1979. (I'm not including the short lived Animated Series from 1974 as it was not a traditional live-action show). After that time, no more than four years passed without a Trek series or film being produced. It's an unprecedented achievement with no other TV show in history even coming close to Star Trek's staying power.

That staying power has been fueled by one key thing: Star Trek is, at its best, a story about ideas. Sometimes it's big ideas (the end of the universe!) and sometimes small (the love between mother and child). And that's the beauty of Trek. It's not just telling the same story over and over (Law & Order, anyone?). It's about opening new doors, looking into corners that are rarely, if ever, peeked at and shining a light onto new possibilities. It can be alternately heavy (The Motion Picture) or light (The Voyage Home), big ("Best of Both Worlds") or intimate ("The Inner Light"). Great and awful (too many of each to name).

Star Trek typically tells its stories through the lens of family and how that family comes together in a moment of crisis to move things to a safer ground. Kirk, Spock and McCoy. Picard, Data and Riker. Sisko and his crew, and on and on. Our heroes are challenged, then rise to meet said challenge through ability, intelligence, guts and having that most undefinable of qualities, The Right Stuff. Sometimes they win, sometimes they don't. But it's almost always a positive, forward-looking outcome which is refreshing in this age of stories about darkness, evil and How Bad Things Are. In an ever-increasing pessimistic world, Star Trek has always strived to show the best in humanity.

We need that optimism now more than ever.

With that in mind, there's a new Trek coming our way next year. It's called Star Trek Discovery, a name that evokes the very best of what Star Trek can be. You know the drill:

"...to explore strange new worlds. To seek out new life and new civilizations. To boldy go where no one has gone before."

Let's hope this new Trek lives up to its distinguished pedigree.

Happy Fiftieth, Star Trek. May you continue to Live Long and Prosper.