Chris Bunce had a bit of a dream. He wanted to write a Blog that centered on the science fiction and fantasy genres of which he'd been a life-long fan. And he wanted a new article every day – no small feat for someone blogging on the side. And so in June of 2011, "borg.com" was born. Billed as "Your Daily Science Fiction, Fantasy and Entertainment Fix", its title doesn't exaggerate. For more than two years now, borg.com has delivered new stories every day. And while Chris occasionally has other writers contribute, the lion's share are written by him. Pretty good for a guy with a full-time job in the real world.

borg.com's stories cover a wide array of subjects ranging from the world of comics (he's a huge Green Arrow fan), to television (Arrow again!), film, books – in short, wherever fun stuff is found. Today's entry is especially interesting to me as Chris has written a review of the new Star Trek book "These Are The Voyages", a publication I mentioned a few weeks ago here at WOD. Like me, Chris is a huge fan of Star Trek (as well as being a fellow collector of screen-used Trek props and costumes) and took to the new book with relish. Check out his full review HERE.

And lest I forget, writing runs in Chris' family. His wife, the immensely talented Elizabeth Bunce, is an author of historical fantasy. Check out here writings HERE.

So be sure to check out borg.com and get your own personal fix of cool!

CLAPPER OF THE WEEK: 1968 "THE ENTERPRISE INCIDENT"

This week's Clapper shot is from one of the only two TOS episodes that featured the Romulans, "The Enterprise Incident". This is the scene where Captain Kirk is transformed (temporarily) into a Romulan so he can infiltrate the Romulan ship and steal their "Cloaking Device". He's pulling off the ears and eyebrows pretty well!Clapper info: June 20, 1968 / Scene 52A / Take 3. 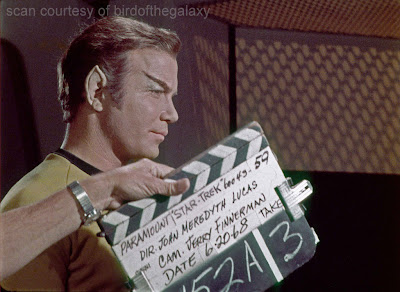 BS ALERT: THE TROUBLE WITH THIS TRIBBLE

Profiles In History, the auction house that sells a ton of entertainment memorabilia and is the subject of the SyFy Channel's "Hollywood Treasures", seems to have a recurring approach to many of their auctions best described by the old saying "if you can't dazzle them with brilliance, baffle them with bullshit". And in their current catalog "Hollywood Auction 56", the BS is definitely flying.

As usual, when the catalog first came out on-line, I immediately did a search for Star Trek. Of most interest to me was the original series Phaser prop that I wrote about HERE. Of secondary interest was an original series "Walking Tribble" from the classic Trek episode "The Trouble With Troubles", one of the most-loved episodes in all of Star Trek. And while I think the Phaser is likely a real original Star Trek prop, I have no reason to think that the Tribble is genuine.

Here's the listing as it appears in the Profiles catalog:

According to the copy, the Tribble being shown is not just an original prop, but it is actually the most prominent one shown in the episode that is picked up by none other than Captain Kirk himself. What proof of this is offered? A postage-stamp-sized photo comparison of the prop in question and a fuzzy screen capture of a frame from the original episode. Here's the cleanest scan I can offer due to its small size:
So based SOLELY on this photo comparison, Profiles expects this piece to sell for at least $7200 (the small end of the given estimate Profiles has assigned to it). Can you determine an exact photo match from the images shown with 100% certainty? I sure can't. Not even close.

There is no history (provenance) given for this piece. How did it originally get off the Star Trek Desilu film lot way back when? How did it come into the possession of the current owner? What solid proof is  being offered beyond light and dark patterns of fake fur that only match up in a very general way?

The real reason we have to question ANY AND ALL original series props that come onto the market is simple – there are far more fakes in the marketplace than originals. Phasers, Tricorders and Communicators are known to have been widely faked for sale to ravenous fans. Tribbles are no exception. How do I know? Take a look at this:
I, too, own a walking Tribble. For all intents and purposes, it's a twin to the one Profiles is selling. Oh, the hair isn't exactly the same – a different comb job. But it's incredibly similar, don't you think? Especially considering that the two were not photographed together under the same lighting with the same camera. For future reference, please keep in mind that the look – INCLUDING DARK AND LIGHT AREAS – can easily be affected by how you lay the fur – by the way you comb it, for lack of a better term. If Profiles had shown a shot of the bottom of their piece (which I have seen), I could show you mine as well – and again it is a virtual twin. Inside of my Tribble is an old toy walking dog, just like the Profiles version.

But here's the kicker. Mine is a fake.

I bought it thinking it was real, but I discovered after the fact that it isn't. As it turns out, a collector friend of mine named John Mahon has an original walking Tribble that has been in his family's possession since the 70's, and it has a very convincing provenance, in my opinion. And John was nice enough to clue me in on those distinguishing characteristics – called "tells" – that a REAL walking Tribble possesses. These tells are neither mentioned in the Profiles auction nor, most importantly, are they shown. And as stated before, the darks and lights are easily changed by a comb-over. So what are we left with to prove that this piece is a true, original Star Trek prop?

Please note that I am not accusing the seller of trying to pass off a fake. He may well believe it to be the real thing. Unfortunately, the seller, who I am familiar with, has other pieces in his collection which people who are widely acclaimed as true experts by most collectors (though not the seller of this item) feel are fakes as well, so this is not the first time this seller has faced this issue. He steadfastly stands behind his self-appointed title of "authority" no matter what others may say. And as long as he keeps those pieces in his collection, I don't really care if they are real or not. But when a piece is offered up with such slim evidence as the Tribble has, it's time to speak up.

Let me be clear – I cannot say beyond a shadow of a doubt that this piece is not real. What I can say is that, in my opinion, Profiles has offered no real proof that it IS real and the onus is on them to do just that. And for those who don't know anything about Profiles, they have actually featured fake pieces ON THE COVERS OF THEIR CATALOGS, only to have to remove them from their auctions when independent evidence showed them to be the fakes they were. In other words, Profiles stinks at authenticating the things they sell.

Nobody likes to think that they were duped. I know I sure don't. I've been burned twice and I can tell you that it truly sucks. It's frustrating and it's embarrassing. But in my opinion, when you make a mistake, you need to own it. You have to take the evidence as it stands and admit to yourself that you made a mistake. You can't simply cherry-pick the facts in your favor while ignoring everything else that isn't. At least I can't. When I discovered my Tribble was fake, I could have tried to pass it on to another unsuspecting buyer. But I have to live with myself, so that would never happen.

Neither Profiles nor the seller will appreciate my take on this piece. But my approach to these things is always the same: when you offer something up that is a true rarity – and anything from the original Star Trek is rare – you'd better not only expect scrutiny but welcome it and be prepared for it. And if a piece can't tolerate tight scrutiny, it shouldn't be for sale.

So if you're considering buying this Tribble, I would encourage you to do your own research. I am neither an expert on these Tribbles (few are) nor do I set myself up as the final arbiter of what is real and what is not. But PLEASE don't simply take the word of the auction house which stands to make thousands on the sale of this item using blurry photos and no provenance. Look into what the likelihood is of this being either real or fake and then judge for yourself.

My thanks to John Mahon for his invaluable assistance and in proving that I'm an idiot for buying my Tribble in the first place!

This week's Clapper shot is from the very first Star Trek EVER, "The Cage", the first pilot episode made for NBC which starred Jeffrey Hunter as the original commander of the starship Enterprise, Captain Christopher Pike. This scene features the super-brainy, telepathic Talosian Keepers, the episode's antagonists. Evidently they didn't see much sunlight on Talos.
Clapper info: December 11, 1964 / Scene 45 / Take 2. 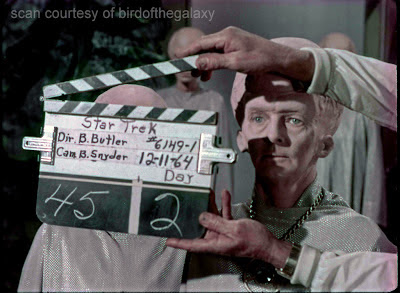 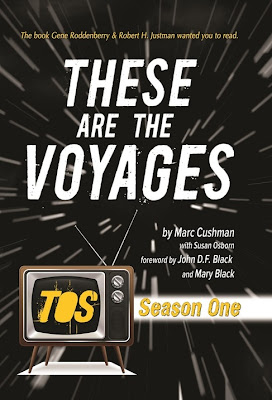