In the upcoming Propstore Entertainment auction, there's an amazing Star Trek piece that is being offered: an actual shooting model of the Starship Enterprise from Star Trek II: The Wrath of Khan! There's just one catch. It's not a full model but a section of the Enterprise used for special effects (SFX) purposes. What, exactly does that mean? Here's the deal. 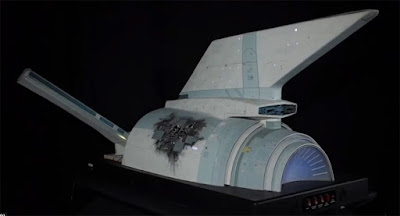 To Star Trek fans everywhere, the Starship Enterprise as seen in The Original Series (TOS) movies (Star Trek I-VI) is an icon of Captain James Kirk's film era. It's not an overstatement to say that, to most of those same fans, that ship reached maximum coolness in Star Trek II: The Wrath of Khan (WOK), the Trek film by which all others are measured. That film featured the first fully-realized battle in space that Star Trek ever had. Sure, TOS stories had plenty of skirmishes with various aliens – most notably the Klingons and Romulans – but due to the technical and financial limitations of the time, those "battles" were more implied than shown. But, then along came Wrath of Khan and, BOOM – epic space battle! Dueling Starships! Phasers and Photon Torpedoes everywhere! Explosions aplenty!In those battle scenes, the Enterprise really takes a beating. The Engineering hull gets strafed by phaser fire, the saucer takes damage and the port side Photon Torpedo Room is badly hit. And it is that last moment – the photon Torpedo Room hit – that required this model to be built (by the technical wizards at Industrial Light and Magic, no less). The guys that built Star Wars also did Star Trek.
For the other two hits, the camera was not tight on the full Enterprise model so that they could optically add the phaser effect and simply apply "damage" to the surface of the model as needed. But for the Torpedo Room shot, they wanted something more graphic, ie: a close-up of the hit as it was happening. This required adding pyrotechnic effects to show the skin being damaged and burned while a phaser bolt was added over top to give the effect of watching the damage unfold in real time. The problem with that was the "pyro" part. Whenever you have fire and small explosions, things can happen which could put the very expensive large model at risk of severe damage. So as to avoid that risk, they simply made a copy. But not a full copy because they didn't need a complete model. Instead, they built an over-sized model of just the section they needed to show on camera. They finished it to exactly match the details on the full model but it permitted them to do two additional things. They could do the 'burning" effect on the port side while also having a larger, more detailed Photon Torpedo launcher to use for those scenes which showed a launch. As we see in the final film, this second model worked seamlessly to achieve both of those effects.

Star Trek III: The Search For Spock (TSFS) was a continuation of the story told in the previous film. In fact, its story picks up where the conclusion of WOK left us. The injured Enterprise is limping home and we see the battle-damage scars on its hull. But there's something odd about the damage. What we see is far more extensive than what was shown in WOK. In that story, the starboard side of Engineering is never hit. Yet that side now shows major damage at both the fore and aft areas of that hull.

So what's the deal? Apparently, director Leonard Nimoy wanted the damage to be more noticeable than what was shown in WOK, hence the additional damage. What that meant regarding the SFX model was that it had to be updated to show that new damage when it was used to show a Photon Torpedo launch in a close-up of the starboard side. The model still shows that damage complete with hull plating to indicate rough repairs.
As for why the original port side damage is gone, we have to look to Star Trek VI for that answer. The SFX model was once again used for a Photon Torpedo launch but this time they needed to show the port side. This required them to erase the battle damage from WOK and make everything pristine and clean. This is why the SFX model shows no damage on the port side.
So there you have it. A model made nearly forty years ago by George Lucas' Industrial Light and Magic is now up for auction. The piece has perfect provenance as it was originally sold by Paramount during their big 2006 Christie's auction and fetched $11,400. With an estimate of around $20,000-26,000 that's a hefty increase. But ANY piece from Wrath of Khan is a rarity, and a piece that gets specific screen time AND was reused in later films is even more so. SO, while this isn't a full model of our beloved Enterprise, this is literally a piece of Star Trek history and I hope it finds a great home.
Check out the complete Propstore auction catalog with more Star Trek items (and tons of other cool stuff) HERE.
Good luck! And, as always, LLAP.
Don
Posted by Don at 11:39 PM No comments: