Who's a huge Spock fan? THIS guy. Spock is at the center of my Star Trek fascination, so naturally, he's at the center of my collection as well. As with any main character, the emphasis of my Spock-crush is with his uniforms – those iconic pieces that everybody recognizes. But those are by no means the only thing he ever wore on screen. 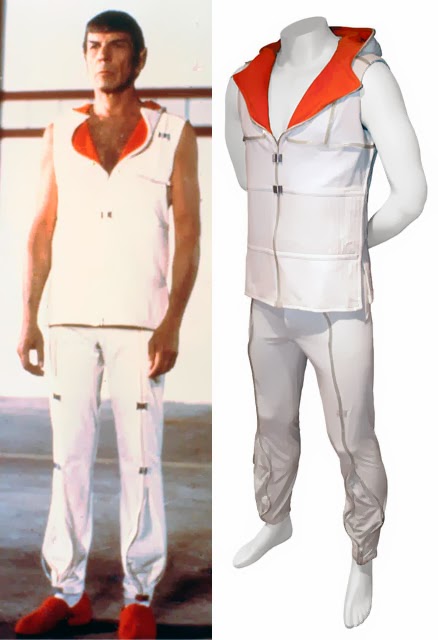 Which brings me to his "jammies", an outfit that Spock wears while a patient in Sickbay in Star Trek: The Motion Picture. In a film literally stuffed with tons of new Starfleet costumes from designer Robert Fletcher, it came as no surprise that there would be specific pieces designed for Sickbay. These might just qualify as the strangest Spock costume (though there's his undies from Star Trek IV – more on that in a later story). The costume apparently represents the 23rd century equivalent to hospital gowns as Spock is not the only one wearing it – patients in other beds are wearing the same garb but with different color interiors.But here's the truly odd thing – Spock's also doubles for his thruster suit undergarments. It's impossible to know for sure since all we see is Spock's head through the helmet's visor. But as he loses consciousness, we can clearly see that he's got on something that is the same orange that we see in the sickbay scenes. Suddenly the tube details take on new meaning – are they are meant to regulate body temps in the Thruster Suit? It's only logical.

The costume consists of two pieces: a sleeveless top and matching pants. For some reason, the top has a hood. Does it get especially cold in Sickbay? I hope not as that would be especially odd given that the top is sleeveless, though we can see another patient with the hood up. Whatever the reason for it, the hood is integral to the piece, so it's there for good.

The costume is made with an all white cotton/polyester blend with vertical ribbed detail on the top. It features a striking orange interior. Is it that color to match his thruster suit? I think so, though just to complicate things, another patient can be seen who is apparently wearing an orange version identical to Spock's. So with that in mind, color's significance is not instantly understood in the con text of sickbay. I think it was simply using costume pieces to pull double duty. 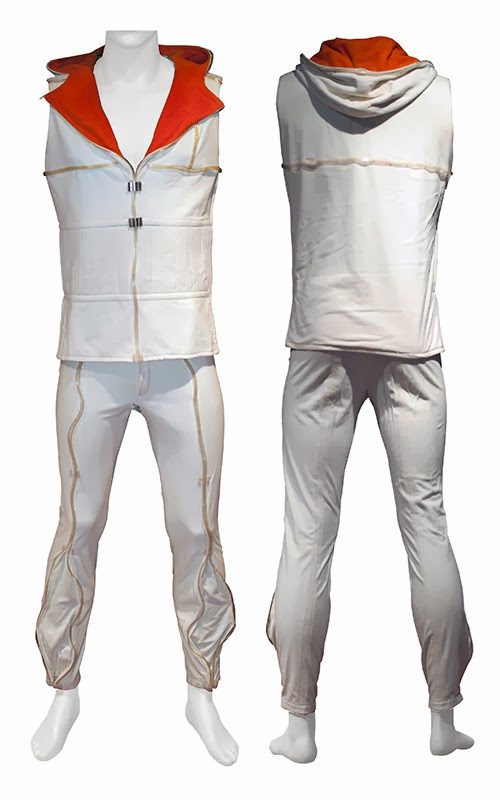 Both top and pants feature clear (now yellowed) plastic tubing as a type of piping that is perhaps meant to regulate temperature or monitor the body's status. These tubes are sewn on and accented with small metallic clamp-type details. The intention of all these details is, of course, to present some sort of high-tech hospital gear, the functions of which are known only to the doctors and nurses of Sickbay. As the pièce de résistance, the costume features a sewn-in Western Costume tag that reads "LENARD NIMOY" (sic).

As Spock costumes, this isn't all that exciting, especially when compared to his uniforms and Vulcan robes. But to me, ANY Spock is a good Spock, and this piece was worn in THE pivotal scene in the first film so it's definitely got some coolness to it. I'm very happy to have it in my collection.