The saga of Premiere Props' seeming inability to get things right continues. They are offering a Star Trek Klingon Tricorder which they claim was "used in numerous episodes of TNG and DS9", according to its description.

Except it wasn't. The piece is a replica created by Rich Coyle, a propmaker who worked on various productions, including Star Trek V and VI, during which he made tricorders like these for production. Those pieces were never used, but he used his experience with them to create a series of replica versions. He didn't sell them as fakes – they were acknowledged copies.

But once replicas get out into the collector pool, they take on a life of their own. When going from owner to owner, sometimes a piece's origin gets exaggerated – or flat out lied about – and we get replicas being passed off as real, production-made pieces.

But Premiere Props has been touting its new authenticity initiative wherein (supposedly) each piece is subjected to the rigors of a review by what they call "A panel of industry experts not affiliated with Premiere Props in the movie & TV memorabilia business". This is the body that has "authenticated" this replica as the real deal. Which means that, as collectors, we should give no credence to any of Premiere's claims of doing true authentication.

I've owned a Klingon Tricorder replica for many years, so I knew something was up as soon as I saw Premiere's offering. Since the two matched, it meant one of two things: either theirs was a replica, or mine was real! While it was an exciting prospect, I originally acquired my piece from Star Trek propmaker Ed Miarecki, a name well-known to Trek prop collectors. Though he didn't make the piece, Ed would have certainly known the difference between a production piece and a replica. When I recently contacted him about it, he told me that he was under the impression that it was originally made by Rich Coyle, but wasn't sure of that. So I did some additional digging and confirmed that was, indeed, the case. Here's what to look for:

Klingon Symbols on front, right panel. They aren't actual Klingon symbols, just approximations. Their design, size and placement are unique to Coyle pieces. It's one of the easy-to-see "tells". 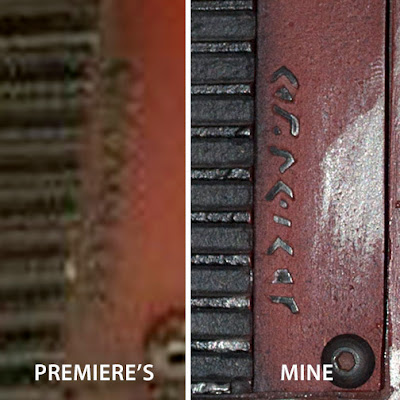 Klingon Symbols on the back. Same as above. 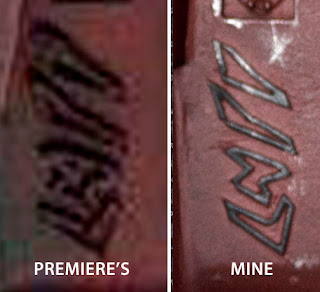 Here's side-by-side shots of Premiere's with mine. Don't let the variations in paint fool you – that can change from piece to piece. It's the construction details that matter. Mine lights up so the screen is white. The Premiere version does not. 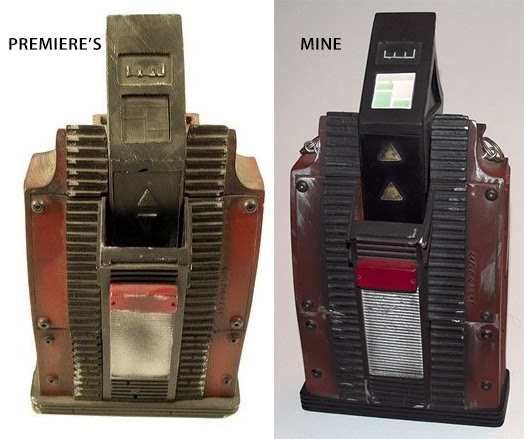 Note that the Premiere version seems to be different at the top on either side of the center piece. But in actuality, it's just missing the caps that go there. You can clearly see the holes where the screws are missing. 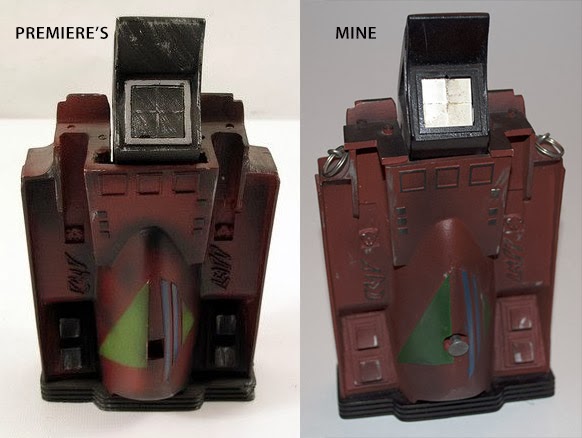 Inside the piece, I would hazard a guess that it is etched with a numeral, which Coyle put in to the ones he painted (though I'm not sure he painted this one so it might not be present).

I only know of one generally-accepted version of a screen-used Klingon Tricorder. It sold last year at Profiles for a tidy sum (right). As you can see by the photo, it has none of the Klingon inscriptions that appear on mine and the Premiere piece. The back is also void of those symbols. It's also heavily sprayed with brown paint, a style favored by the DS9 propmakers.

So here's the deal. If Premiere can offer some actual proof that their version was used in a production, I'm all for it. After all, that would mean that mine might be production-used as well. It would be incredibly self-serving for me to promote that idea (and I can think of a couple of collectors who would do just that!), but the facts simply don't support it. And by the way, by "proof", I mean showing this EXACT piece in an actor's hand, not some anonymous piece in a blurry screen shot.

This is one of those pieces that's tough to authenticate because there's simply no good screen images available, nor are there any shots of these in PR shots or anything like that. So, to authenticate one of these, it's all about details (do they match the known screen-used versions) and provenance (how did it get from the studio to its present owner). Premiere offers NO specifics about either aspect. Instead they show a dark, low-resolution shot that shows one of these pieces in an actor's hand, as if that proves something. It doesn't.

Premiere's much vaunted panel of experts and MPDNA program have definitely let them – and us – down in this case. It makes you wonder just who is on that panel, or whether or not they even exist. The best that can be said about them if they DO exist is that they are apparently incompetent.

So far as I can tell, it's all about lip-service, not true, knowledgeable evaluation.