ADDENDUM: The Klingon Tricorder mentioned below is now known to be a REPLICA piece made by Rich Coyle and not a screen-used piece as the auction states. Premiere Props has been notified by me of this fact.

Premiere Props, an auction company that specializes in entertainment memorabilia auctions, has an auction coming up this weekend. Unfortunately, Premiere has had many problems in the past with the basic authenticity of some of the items they offered. Back in June, 2013, for instance, Premiere offered a number of Star Trek props including several that were identified as authentic original series Star Trek props from the 1960's.

An auction that featured a SINGLE original series prop would have been amazing to collectors like me. But that auction had an amazing six pieces including a Phaser 1, Phaser 2, Tricorder, Communicator, Tribble and Stylus. If real, the mix would have brought well in excess of $100,000! Perhaps a quarter million!

Except they weren't real. Far from it. They were obvious fakes to those in the know and were subsequently pulled from the auction or sold as (and I'm not kidding) "original fakes".

But soon after that fiasco, Premiere announced an initiative that sounded like it would address these problems in the future. They were going to start using an independent board of experts to authenticate materials before going to auction, thus ensuring that bidders would get what they wanted – real, authentic pieces.

On their YouTube video (found HERE), Premiere's rep stated, "It all comes down to authentication. People want to make sure that the prop that they are buying is real. We have a team of experts that have actually gone through, checked the provenance, researched it, screen-matched it and we have authenticated and made sure that that is the prop" (sic). He added, "Again with these items, sometime if could take, you know, an hour to authenticate them, sometimes it takes a matter of days, and sometimes, you know, for the higher end items it could take weeks of matching these items." He also spent a great deal of time describing something called "MovieProps DNA", which is nothing more than a fancy Certificate of Authenticity.

Sounds great, right? So who is this "team of experts", exactly? Premiere doesn't say. On their website's "Authenticity" section there's no mention of them nor any mention of the vaunted "MovieProps DNA" process.

Static Stunt Klingon Tricorder of cast-resin with paint details as used in numerous episodes of TNG and DS9. Approx. 8" x 4 1/2" with minor corner chipping from production use. This item has been authenticated and marked with new technology by MovieProps DNA to prevent against fraud and counterfeiting. A panel of industry experts not affiliated with Premiere Props in the movie & TV memorabilia business has authenticated this item. This item now includes three levels of security: 1) DNA laced invisible ink – a 9-digit code laced with DNA ink is placed on an appropriate place of the prop/costume and can be only viewed using a high-frequency UV light. The chances of replicating the specific DNA sequence which is unique to MPDNA is 1 in 33 trillion. This DNA sequence is so secure it is admissible in a court of law.?? 2) Archival Microchip Encrypted Tag - a patented,  acid-free,  1"x 3" tag with an encrypted microchip is placed onto the Certificate of Authenticity. The microchip contained within the tag contains all of the pertinent information about the prop or costume. The tag is tamper proof and the microchip is encrypted,  making it impossible to duplicate.? 3) The certificate also has the 9-digit DNA invisible ink mark which must match the 9-digit invisible ink mark on the prop. This will ensure that it is a genuine prop issued by Premiere Props and authenticated by MPDNA.
________________________________

I know – it's a mouthful, but it illustrates my issues with the PP authentication initiative.

First: Authentication
Actual authentication is addressed thusly: "A panel of industry experts not affiliated with Premiere Props in the movie & TV memorabilia business has authenticated this item." Again, who are these experts? We get a detailed overview of the whiz-bang COA thingy, but nothing on the most important aspect about any piece: authentication.

Confused by the lack of any detail, I sent the following e-mail to Premiere:

"I'm a little confused about the text that reads 'A panel of industry experts not affiliated with Premiere Props in the movie & TV memorabilia business has authenticated this item.' Can you please elucidate on these people, please? Who are they and what's their expertise? Thank you."

"Hello,  Premiere Props has also authenticated this item but we have partnered, with a company called MovieProps DNA who have put their stamp on it to, authenticate it. You can visit their website to learn more about the company, and the experts www.moviepropsdna.com"

Great. So their answer to my very specific question was "go to this website". So I did. At the MPDNA website, I found a page labeled "Experts". Hot damn! Surely this would give me what I wanted. Alas, no. The "Experts" page lists one, single expert. Here's the write-up, in part:

"Daniel Strebin (Lead Expert) - has been a full-time collector,  restorer,  dealer,  archivist,  and professional appraiser of vintage original film posters, lobby cards, and stills for over 35 years,  under the business names Posterman and Folio Gallery. He has personally owned,  dealt,  or otherwise handled several hundred thousand examples of vintage film ephemera,  with an aggregate value of tens of millions of dollars,  and it is quite rare for him to confront a film artifact unfamiliar from his experience."

So, apparently, this one person – Daniel Strebin – represents the entirety of Premiere's authentication process, since it is the only person Premiere actually supplied to me. The line about "Premiere Props has also authenticated this item" means nothing. I asked for specifics, not fluff. And, unfortunately, Daniel Strebin doesn't seem to have any specific knowledge of the world of Star Trek, so his name lends no credence to the process.

Second: Screen-matching
The PP video mentioned "screen-matching", the process by which a specific piece is found in use in a film or TV show. And let's be clear – screen-matching means finding that exact piece on screen – not one that simply resembles it, making screen-matching a very difficult proposition. Most props and costumes simply cannot be screen-matched. But according to their video, every piece has been screen-matched. This would be an incredible thing. And apparently, their idea of screen-matching the Klingon tricorder mentioned above is this: 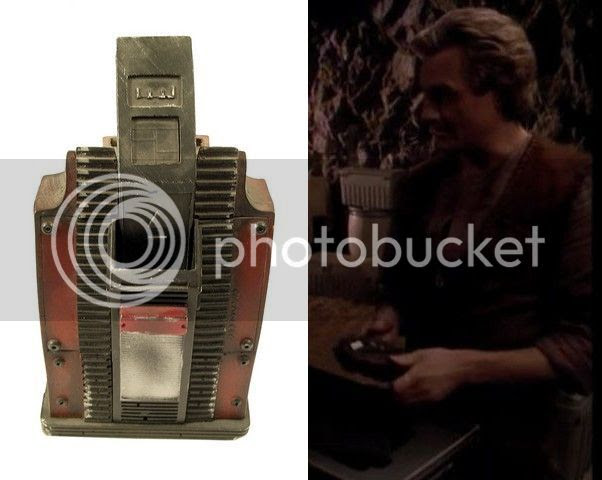 The photos above are from the actual PP auction listing. I have not changed or resized them in any way. Apparently, the screen shot at the right is supposed to show the tricorder that they are selling, shown on the left. Strangely enough, the screen shot actually proves that they are NOT the same, despite the poor quality of the shot. The one they are selling has no corresponding white screen as shown in the screen shot. Also, the item for sale is of a style that  exactly matches a replica version that I bought from a Star Trek prop maker several years ago. What it does not match is other known examples of screen-used pieces. I have sent an e-mail to the replica maker asking for his insight.

Third: An over-emphasis on MovieProps DNA – it misses the point
When you look at the Tricorder's description, something becomes very obvious: ten percent of the text deals with the actual item's information, while the rest deals with the MPDNA stuff and a sentence dedicated to telling us about the mysterious authentication panel. Ninety percent deals with their DNA version of a certificate of authenticity while yielding NOTHING about the actual authentication itself!  What good is all this DNA crap if we can't be sure the piece is real to begin with? They've given no specific, verifiable information regarding authenticity at all.

So, to bottom-line the situation, Premiere's solution to their past authentication errors is mentioning  "A panel of industry experts not affiliated with Premiere Props" while giving zero proof that such a panel exists. And with Star Trek stuff, each sub-section of the franchise – TOS, TNG, DS9 – has their own intricacies. There's only a handful of people out there that could qualify as "expert", and if PP has those people, they should shout it from the rooftops.

So I'm calling "bull" on this whole scheme. When PP announced their panel of experts, I think collectors everywhere saw it as a positive sign. But it's all smoke and mirrors, with nothing of any substantive value. So the company that offered hundreds of thousands of dollars worth of fake Star Trek items has actually done absolutely nothing to regain the hobby's trust. Zippo.

If you're interested in anything Premiere has to offer, remember the headline: caveat emptor.