"THE DOUBLE-GUSSET POSTULATE" or "GILDING THE LILY WITH BULL"

In Summer of 2012, Profiles in History offered what they described as "William Shatner 'Capt. Kirk' Tunic from Star Trek: The Original Series". Among their claims was "match on overall tunic size to Shatner including double gussets on tunic sides (unique feature to Shatner tunics)".

Interestingly enough, a self-described Star Trek "authority" and the self-appointed king of Trek Collecting each stated on their blogs that "This tunic features a double gusset design; or the presence of three seam lines running from the armpit area down the torso on each side of the costume - a design characteristic that is considered by knowledgeable Star Trek experts to be only present on those TOS command tunics specifically tailored for wear by William Shatner. The double gussets on this tunic, as well as two photos in which this unique construction detail is visible on William Shatner in costume..." Sounds a lot like the auction info, right?

At the time I questioned this element's characterization as being exclusive to Shatner pieces. How, exactly was this established as a fact? How did these "knowledgeable Star Trek experts" know this to be true? And what proof was offered as to the veracity of this so-called "fact"? None, other than showing a couple of screen caps with Shatner wearing a shirt that displayed this gusset detail. I showed a screen cap of an identical shirt being worn by stuntman Paul Baxley. I was then called all sorts of nasty things by the aforementioned bloggers for having the gall to question their research. Almost like they had some sort of personal interest in the piece. Hmmm.

Since last summer, I have regularly been looking at various episodes of TOS for a variety of research reasons – phaser details, comms, sets, props, etc. And while doing this research, I started to notice something that I wasn't even looking for. I discovered that the "double gusset" detail that was so highly touted was not only NOT exclusive but was wide-spread. I saw it everywhere once I sarted looking for it! It is seen in the earliest episodes all the way through to the end of the series. 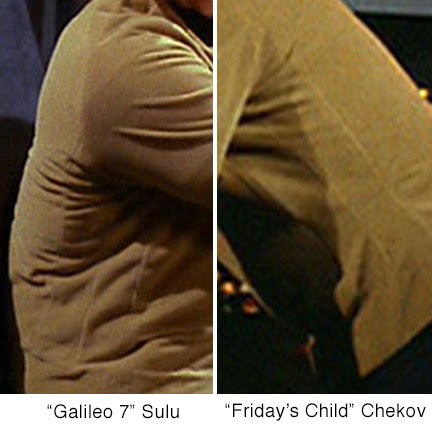 As is common in TV production, Shatner's shirts were probably recycled for use by other actors – stuntmen, background extras, guest actors, etc. But, in my opinion, that doesn't address the number of times the detail is clearly seen on so many gold uniform shirts, including regulars Takei and Koenig who would have undoubtedly had their own shirts created exclusively for them. Shirts that clearly show the telltale three seams.

Beyond the gold shirts, the three seams can clearly be seen on Nimoy's blue shirt, Scotty's red shirt and on tons of extra's pieces of all colors. The three seams is in no way shape or form a little-used, "Shatner-exclusive" detail. In short, it's EVERYWHERE! I have cited the episodes from which the images were pulled so anyone can duplicate my findings. And I show only a small fraction of appearances. 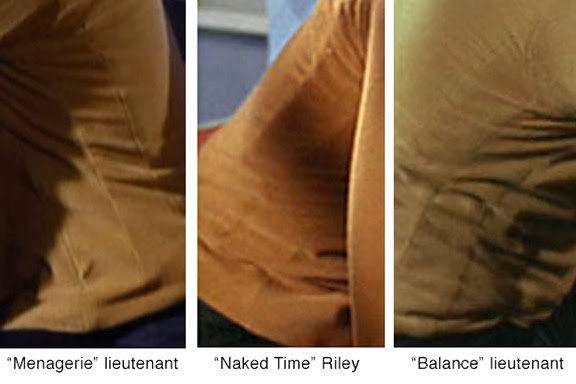 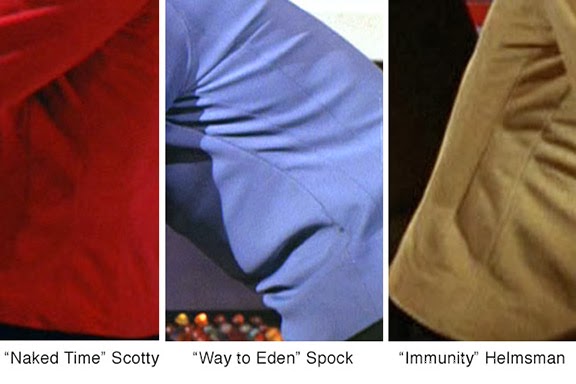 If people want to make up stuff for whatever reason, I couldn't care less, providing they don't put it out into the world to mislead. But when these so-called "knowledgeable Star Trek experts" declare something to be fact without doing even the most basic of research to either prove or disprove the theory, they show their true colors – it's all about self-interest and they'll ignore things that don't support their POV. This is a continuing theme with some people.

Why is it so hard for so many people to be circumspect in these types of cases? If you think something is so, state your case as to why you feel that way, offer proof (in this case show the detail is EXCLUSIVE only to Shatner uniforms), and let people make up their own minds. Conveniently, the proponents of the "gusset postulate" showed only shots of Shatner wearing the detail while totally ignoring the fact that the detail IS IN NO WAY EXCLUSIVE TO SHATNER PIECES. This was either shoddy research or an attempt to deliberately mislead, I have no idea which. I still feel the shirt was a real Kirk shirt, but this detail should have never been used to support that idea. It's flat-out wrong.

So the next time some self-appointed expert wants to blow smoke, remember caveat emptor and trust no one. Not even me. Do your own thinking, do your own research, and reach your own conclusions.