CLAPPER OF THE WEEK: "THE DOOMSDAY MACHINE"

This week's clapper comes from a true classic, "The Doomsday Machine". It's one of the few episodes that features another Federation Starship other than Enterpise, in this case the USS Constellation. It featured an excellent performance by guest star William Windom, one of TV's great character actors. The clapper shot shows Windom as Commodore Decker sitting in the center seat of the Enterprise bridge (filling in for the absent Captain Kirk) in one the tensest moments of the episode.Note Decker's chest patch is that of the Constellation. Apparently, only the Enterprise got a cool patch design! 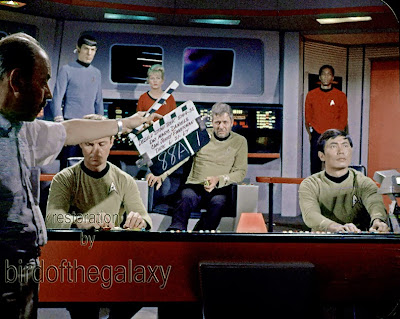