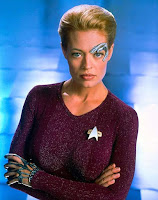 What set Seven of Nine (Seven to her friends) apart from her crewmates can be summed up with two words: 1.) implants (no, not those kind – the Borg kind!) and B.) catsuit. Propstore has both.

For starters let's examine the costume. Though it's identified as her Starfleet uniform, since Seven wasn't in Starfleet, she didn't wear a uniform. Instead, she wore a series of one-piece body stocking suits in various colors. This is one of the purple versions.

Lot #: 418 - Seven of Nine (Jeri Ryan) Starfleet Uniform, STAR TREK: VOYAGER (TV 1995-2001)
Seven of Nine’s (Jeri Ryan) Starfleet uniform from the sci-fi television series Star Trek: Voyager. After she was liberated from the Borg, Seven was allowed to stay on board the USS Voyager. While she initially wore a Borg-like silver suit, Seven’s outfit changed to a purple color as she adjusted back to human life.
This one-piece suit is made from purple tinsel lurex fabric. The elastic qualities of the fabric enabled Seven’s outfit to have its signature tight fit. A hidden zipper closes the suit at the back and clasps complete the seamless look at the collar. Additionally, the feet close at the rear with Velcro, in order to allow an easier fitting.
A Starfleet badge is also included and attaches to the suit with Velcro. The badge is made of resin and has the number 10 written on its reverse side. The piece shows minimal signs of wear and is in very fine condition.
£4,000 - 6,000 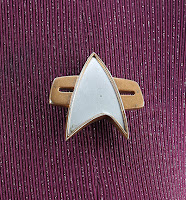 This fantastic piece comes with a production-made Starfleet Comm badge that attaches via a Velcro patch.
To go along with this great costume you'll need the right accessories. How about some Borg hand implants? They're just the thing.
Seven featured Borg implants on her face and left hand. Nothing says "I was Borgified" like creepy circuitry on your body, right? 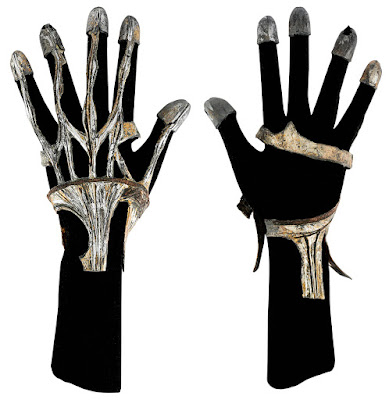 Made from foam rubber, the glove is finished in metallic steel and brass-effect paint. There is wear to the glove and some sections have become detached. However, it remains in good but fragile condition, and is presented on a black flocked hand. Also included is a studio certificate of authenticity and an autographed 10” x 8” promotional still of the character, signed in gold ink. Dimensions (hand display): 32 cm x 15 cm x 4 cm (12 ½” x 6” x 1 ½”)
£2,000 - 3,000
There you have it – a great batch of Star Trek items from across the various franchise installments. Don't miss out on your opportunity to grab a piece of the future. The auction is on September 20th so get signed up now at PROPSTORE.


Good hunting and as always...