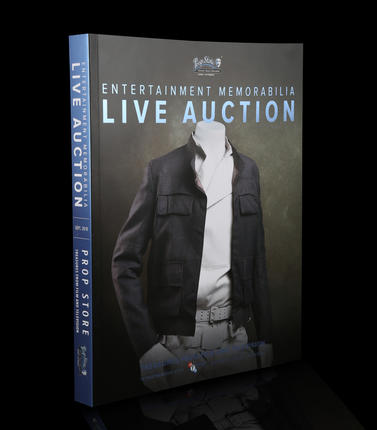 PropStore has a big damn auction in London coming up later this week and since they are one of the premiere auction houses offering up fantastic entertainment memorabilia, they naturally have some fantastic Star Trek offerings. Regarding the UK VAT tax, I've been told that it doesn't pertain to most items so if you're in the US and want to bid, contact them directly for more information.

Ignore that Star Wars thing on the cover (which, admittedly will be very difficult!) and shoot on over to the Star Trek section starting with Lot number 412. There's a bit of something for everyone this time around – props, costumes, set pieces and even a shooting model!

My personal favorite is a piece that has been offered up at auction before and is, in my opinion, one of the coolest pieces to ever come to light. It's literally a piece of the original Starship Enterprise – a control panel from the original bridge! 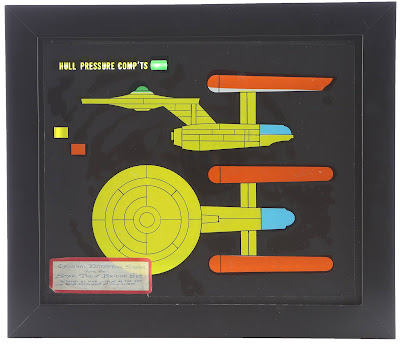 Lot #: 412 - USS Enterprise Bridge Translite, STAR TREK: THE ORIGINAL SERIES (TV 1966-1969)
A USS Enterprise bridge translite from Gene Roddenberry’s original television series Star Trek. This screen served as set decoration on the USS Enterprise bridge throughout the pilot episode, as well as all three seasons of the sci-fi show. Visible on consoles to the left of the captain’s chair, this translite was rescued by animator Mike Jittlov while the original bridge set was being demolished at University of California, Los Angeles.
This translite was made by producing colourful gels in the shape of the USS Enterprise. The gels were then sandwiched between two panels of glass and placed in front of a light box to achieve the desired ‘screen’ effect. A label is placed at the bottom right corner and reads, “Original Enterprise Screen from the Star Trek Bridge Set Liberated by Mike Jittlov as the set was being demolished at UCLA in 1970”.
£8,000 - 10,000
This amazing piece can be seen on the bridge throughout the run of the original series. Here's a few episodes in which it appeared:


In short, you can get a glance at the panel in tons of episodes!
The other (sorta) original series piece is the original cover art for the DC comics run of Star Trek from 1985 and features a very heroic Hikaru Sulu in action in beautiful black and white. 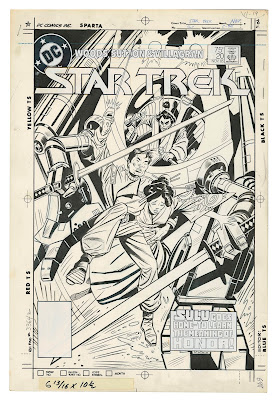 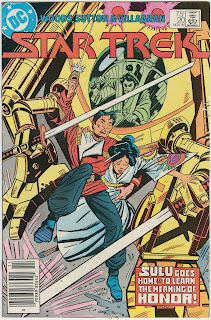 Lot #: 419 - Tom Sutton and Ricardo Villagran Hand-Drawn Cover Artwork, STAR TREK #20 (1985)
Hand-drawn cover artwork by Tom Sutton and Ricardo Villagran featuring Sulu, from Star Trek #20. In this issue, which is titled “Giri” (Japanese for honour), Commander Sulu found excitement and danger as he took shore leave for a wedding.
This original pencilled-and-inked artwork is drawn on Bristol board by penciller Tom Sutton and inker Ricardo Villagran. The cover shows Sulu using a sword to defend himself against Reijiro, the groom, who operates a cyber suit. This was the first cover to feature Sulu alone, and shows the Starfleet officer using a sword — although he does not wield one in the comic. Pasted onto the artwork are the artist’s names, issue block, title art, barcode block and tagline, which reads: “SULU GOES HOME -- TO LEARN THE MEANING OF HONOR!” On the back of the sheet is a DC Comics stamp and a handwritten date, “5/8/85”.
£500 - 800


That's it for original series stuff. Tomorrow, I'll get into some amazing Next Generation pieces.
To see the entire Propstore catalog and sign up for bidding, go to PROPSTORE.