THE "INTO DARKNESS WTF MOMENT OF THE WEEK", PART 2: MAGIC TRANSPORTERS

Welcome to Part 2 regarding various problems with Star Trek Into Darkness. Here's my disclaimer to all those that liked the film: good for you. I didn't.

In 2009's Star Trek, we're shown something called a "transwarp transporter", a really super-special transporter than not only allows transport to a destination that is light years away, but a destination that is also a starship moving at warp speed that is light years away. To me, this was, and still is, one of the dumbest plot devices to ever appear in any Star Trek incarnation. It basically gives the transporter a near-omnipotent range and in so doing removes limitations that help give stories any meaning. If a device can do anything, what's the challenge? The Magic Transporter negates any. 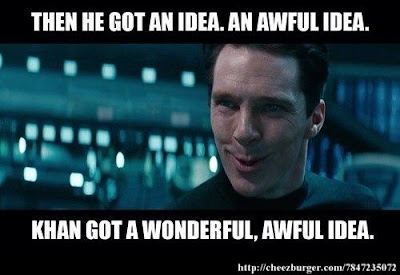 Flash-forward to 2013's Into Darkness. Instead of leaving the The Magic Transporter on the heap of bad ideas, director JJ Abrams doubles down on it and makes the entire plot of the film hinge on the device. But just to make matters worse, he gives it an almost infinite range as it transports "Khan" from Earth to the Klingon homeworld of Kronos in the blink of an eye. Instantly. Bam.

That is such a bad idea on so many levels, with the most important being the sheer impossibility of such a thing. A transporter than can work over hundreds of miles is already a stretch. But the transporter is a long-standing conceit of Star Trek that was invented to simply get our heroes from the ship to a planet in a hurry – it was cheap, production-wise, for a 60's TV show. Over the years, transporters have done all sorts of weird – and sometimes dubious – things. But to say that a device that can fit into Khan's little aircraft can instantaneously send someone half-way across the galaxy is just stupid science and a contrivance that takes the place of decent story-telling.

Lameness aside, there's another big reason that you'd never want to introduce such a technology into the world of Star Trek. Simply put, if you have a transporter that can do that, you don't need Starships. The Enterprise and all its sisters have just become obsolete! But, of course, starships are at the heart of Star Trek, so they'd never do away with them, right? Of course not! Which is why you shouldn't introduce something that would render them useless!

The Magic Transporter is the perfect metaphor for the story-telling throughout Into Darkness, which can be summed up as this: force the plot to go where you want it to go, however stupid the reason. There's more examples of this beyond The Magic Transporter, of course, and I'll be talking about them in future installments.