THE "INTO DARKNESS WTF MOMENT OF THE WEEK", PART 1: KHAAAAAAN!?

Welcome to my new series wherein I'll be dealing with the various problems with Star Trek Into Darkness. Here's my disclaimer to all those that liked the film : good for you. But I HATED it for being the piece of shit that it was. In my opinion.

In a recent interview in Variety, Star Trek Into Darkness producer and writer Damon Lindelof said this:

"When we did Star Trek Into Darkness for example, we decided that we weren’t going to tell people that Benedict Cumberbatch was playing Khan. And that was a mistake, because the audience was like, "We know he’s playing Khan." That was why it was a mistake."

Now, let me be clear here: technically, he is correct. Hiding Khan's identity was indeed stupid on several levels. But the far larger "Khan mistake" can best be shown visually.

When the first JJ Abrams Star Trek film's cast was announced, it told us that he was looking for direct contemporary counterparts of the actors from the original Star Trek series. So much so that Karl Urban seems to actually be channeling DeForrest Kelley! Here's the main cast with their counterparts: 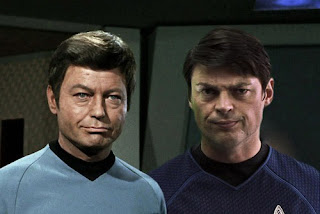 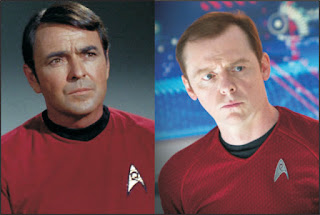 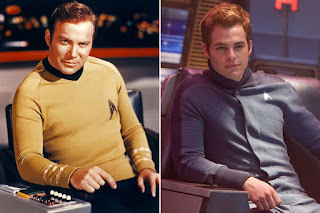 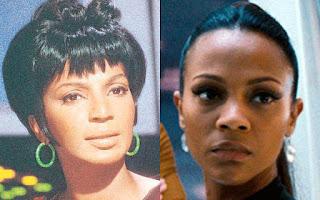 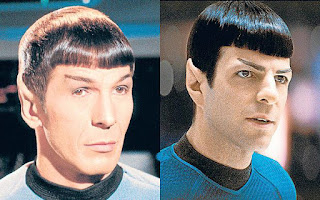 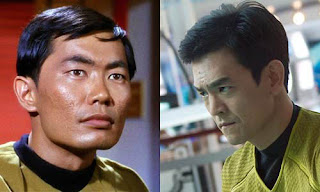 It was obvious that whatever racial "type" the original actor was, Abrams was looking to emulate that. A black character like Uhura, for instance, was to be played by a new black actress. Sulu was to be played by a new Asian-American actor. Scotty would have his familiar Scottish lilt, and be played by a caucasian actor. Spock HAD to look a lot like the original character as played by Leonard Nimoy and on and on. Why was this necessary? Because, according to the script of the 2009 film, these characters ARE THE SAME ONES SEEN IN THE ORIGINAL SERIES, albeit in a different timeline. And, in the case of Spock, the original and new versions would be side by side on camera. So it was imperative that they look and sound similar or the conceit wouldn't work. For instance, had Kirk been played by a Chinese-American actor, the illusion would have been shattered. So ethnic consistency was adhered to.

Let's now fast-forward to Into Darkness. We're introduced to a character identified as John Harrison, a British character played by the whitest white man ever, Benedict Cumberbatch. However, as the film unfolds, we're told that, in reality, this guy is actually none other than (drumroll please) – KHAAAAAAANNN! Yes, THAT Khan, the character played by tan-skinned, accented Mexican-American actor Ricardo Montalban in the original series episode "Space Seed" and, most famously, in 1982's Star Trek II: The Wrath of Khan.

So, for some reason, in this timeline, we are to believe that FOR SOME INEXPLICABLE REASON, Khan has suddenly changed nationalities, accent and skin color. It's important to remember that Khan was supposed to be an Asian-born dictator who once ruled over the Middle East and much of Asia and that in this new timeline, he's STILL THAT GUY. But where Montalban's Hispanic origins and accent gave him an air of exotic possibilities – a reasonable stand-in for an exotic Asian character given the standards of the day – Cumberbatch's Khan gives us none of that. In fact, with his light skin and perfect British accent, Cumberbatch gives us the ANTI-KHAN – a character who could not possibly be the Khan we met before. 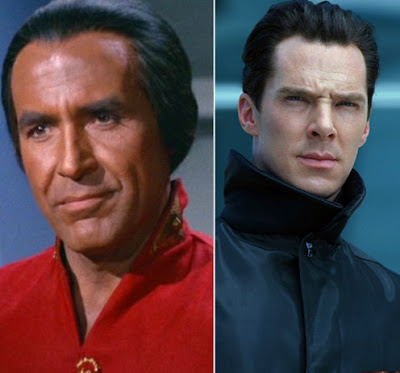 Did he get plastic surgery? We're not told. Did he change his accent for some reason? Ditto on that. In short, having Cumberbatch play Khan was like having Anne Hathaway play Uhura. Picture that, please: we meet a lily-white female character who introduces herself as Jane Smith, only to later reveal to us that she's actually... Lt. Uhura! The SAME Uhura from the original show! Would you accept that? Of course not!

While I was not thrilled with the film up to that point, it was at the very moment that Cumberbatch uttered the line "my name is Khan" (in his perfect English accent) that I checked out. I was done.

You might as well have painted the Enterprise magenta and had Alf show up as an alien – I could not have become less invested in the rest of the movie if I tried.

I want to stress something here. I LOVE Benedict Cumberbatch as an actor. I think his Sherlock Holmes has become the definitive version of our times. But in this case, he was simply miscast.

So after setting the rules for us – these are the original characters but in a different timeline – the writers of Into Darkness said "forget that" and pulled the rug out. And expected us to not notice!!

I noticed. And many, MANY others did as well. So, Mr. Lindelof, your mistake wasn't hiding Khan's identity, it was totally miscasting the role!