THE WRATH OF DHAN SALE: ROUND TWO – KLINGONS!

Here's a couple more choice pieces up for sale from the Wrath of Dhan Vault: 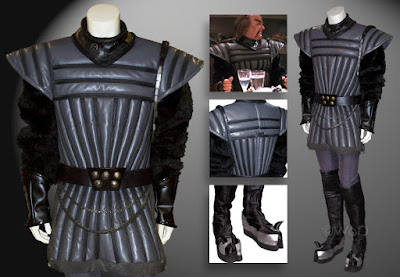 From Star Trek VI: The Undiscovered Country, this is the Klingon uniform worn by Gorkon's General – the one with the bad table manners. Most Klingon costumes were reused over and over throughout the run of the many Star Treks and as such, show signs of wear and crude changes like spray-painted boots. But not this one. It was apparently re,moved from inventory early on and is amazingly clean, complete and screen-matched. Includes the very-hard-to-find split-toe Klingon boots in their original black finish. This uniform looks like it was just taken off the set last week. Makes for a fantastic display. Purchased through Propstore. 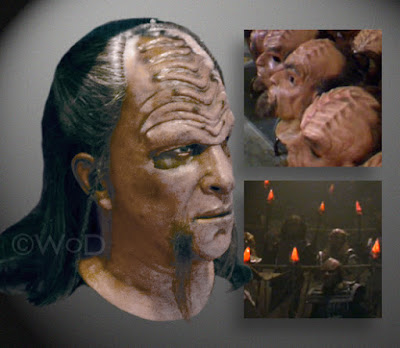 Also from Star Trek VI: The Undiscovered Country, this Klingon mask was used in the big courtroom scene where dozens of Klingons are raucously shown. It's in fantastic condition with hair and life-like coloring. I'll include the hand-painted mannequin head (shown) that helps make for an eerily accurate display! 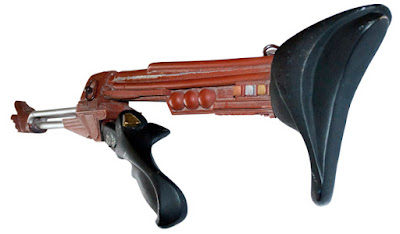 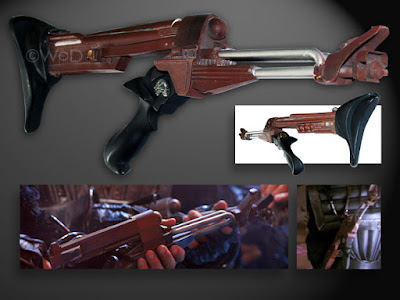 First seen in Star Trek III: The Search For Spock, these rifles made appearances throughout the various incarnations of Star Trek. This is a resin and metal prop that shows some signs of use and repair, but since these are built with a "weathered" look, these areas don't detract. Features tell-tale "death's head" emblems on pistol. A similar specimen just sold at auction for $3500!

That's it for Round Two. More to come!