THE ROAD TO HELL: A PERSONAL, MORTIFYING JOURNEY 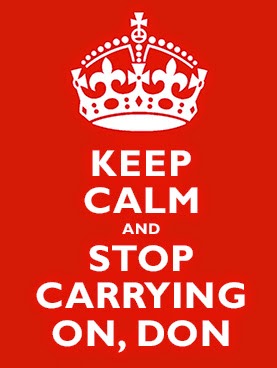 A friend of mine contacted me about my recent Blog story on one Alec Peters. "I understand your anger and disgust with him," they said. "but I think you're getting carried away with your emotions and it shows in your writing so that you are coming across as a ranting juvenile. I'm not the only one who sees it this way."

Now, it may come as a bit of a surprise, but I greatly appreciated that insight into my behavior. Self-awareness is a fickle thing. You think you've got it and then, "wham!", you find out you were absolutely mistaken. While I have no problem being perceived as passionate, I was hoping to avoid the whole "foaming at the mouth" imagery. Alas, apparently I've crossed that line without even being aware of it. That sucks for me, because, while I really don't care what stupid people think of me, there are definitely those out there who are intelligent, decent people, and whose opinions I greatly respect. So when one of them has the temerity to say "Hey, Don, you're being a dick", well, I assume I am, in fact, being a dick.

And so, here I am at a crossroads, uncertain as to how to go forward, or whether I should go forward at all. If I'm just an idiot screaming into the wind, why bother? Go on to what end? How did I get to this point? It's that same old story: guy gets burned, guy rages against the darkness, guy turns into an asshole. Or, as I call it, Wednesday.

Which can all be distilled down to maybe, just maybe, I've put too much "Wrath" in "Wrath of Dhan". What started as a joke has come to be far too literal. The joke's on me.

So, what to do? No one is particularly worried about my ranting in a review of a phaser, naturally. But eventually, The Buffoon King will make yet another entrance, bringing new stupidity and lies (I think I hear some now, BTW!). Should I stand aside and let the inmates run the asylum? Perhaps so.

But my friend also added this: "I'm not telling you to stop writing about Alec when he pulls crap like this,  but I would advise trying to maintain a little more distance and objectivity in your writing."

So can it be just that simple? Maybe so. Maybe my new mantra needs to be: "Whoa, there, buttercup. Calm down." But calming down doesn't mean don't fight the fight. It just means turn down the volume. Make your point with more flair and less phlegm.

I think I can do that. Please don't misunderstand me. I stand behind every view I've ever written about in this Blog. But going forward, I will stay on message and do so in a less...wrathful way.

Let me give it a shot:

While I don't support anyone ripping off collectors – and only complete idiots would think or say that I do – I will admit that I don't give one flying crap about whether or not Alec Peters was ripped off. Frankly, if he was, well... karma's a bitch, man.

That's right: I have no problem with anyone taking advantage of Alec Peters. I'm a huuuuge fan of the idea. I am NOT saying he WAS ripped off. But IF he was, I say "what goes around, comes around".

If you hear about a bully getting his ass kicked, do you care? I sure don't.

So how was that? Concise and to the point and no "mouth foaming" or histrionics in sight.

So, to my readers I promise this: I will do my best to keep the tone in a more reasonable range. I will in no way give anyone a pass, of course – I can't take ALL the "wrath" out of Wrath of Dhan, after all. But frothing will be an option that I will try my absolute best to avoid.