"SIR, YOU ARE OUT OF YOUR DEPTH" – COMMENTS FROM THE SHALLOW END OF THE POOL 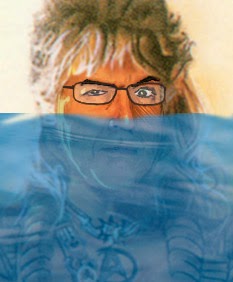 I've been taken to task in the past by sellers of very expensive Star Trek items for not accepting some of the claims that were made about the pieces. As it turns out, I've been called on the carpet yet again regarding my recent story (found HERE) on the TOS Tunics being offered by Profiles in History. I expressed the opinion that the Profiles claim that the two shirts were worn by main cast members – specifically James Doohan and George Takei – was unfounded and with little merit. A reader by the name of Jennifer Smith (owner of a Blog called Red Kryptonite) took exception to that finding. In the public "comments" section she said the following:

"So basically, you're just another armchair "expert" with a pause button. Your skepticism is admirable, but as you said yourself, you have not personally examined these items. You do not know who is selling them, or the circumstances of their provenance. This is exactly why most high end Trek collectors keep their trading private. Some fans can't handle items that come up for auction for high dollar amounts, so they must attempt to prove that something is "fake." I believe that in this case, sir, you are out of your depth."

I found these comments interesting in a number of ways.  Let's take them one by one.

"Your skepticism is admirable, but as you said yourself, you have not personally examined these items"

This is absolutely true – I have not handled the pieces. But in my story I stipulate that I believe the pieces to be authentic production-made tunics. My only issue was the attribution to specific actors and no amount of handling will conjure up the truth about what actor wore a shirt 47 years ago. If I'm mistaken about that, I'd love to hear in what way.

"You do not know who is selling them, or the circumstances of their provenance."

Well, duh, no kidding! The lack of this knowledge goes to the very heart of the matter. But she writes as if it is in some way my fault for not knowing the seller and the piece's provenance. To the contrary, I would LOVE to know who the seller is and the piece's history! But Profiles didn't tell us either of those things. If they had, there might not be an issue here. But they didn't and I'm not psychic.

"This is exactly why most high end Trek collectors keep their trading private."

So "high end Trek collectors keep their trading private" because of what? Questions might get asked by the great unwashed? Proof of claims might be required? This is a nonsensical statement to me.
If a piece can't withstand scrutiny, it doesn't deserve to be recognized as authentic, period. I would hope that high end Trek collectors would be the FIRST to require absolute specific proof of authenticity before they themselves put out their hard-earned money for something. If they didn't, they're lousy collectors, in my opinion.

"Some fans can't handle items that come up for auction for high dollar amounts, so they must attempt to prove that something is "fake." "

Ah, the "jealousy" defense. I have news for Ms. Smith – far from being jealous of those with great pieces, I CELEBRATE great pieces whenever possible, whoever their owners might be. When the original Phaser Rifle from "Where No Man Has Gone Before" was brought to auction earlier this year, my stories lauded the great piece's place in Star Trek history. Of course, the reason I could do that was because there was no doubt about its authenticity. After all, it was be sold by its maker who had kept it for 47 years! I, myself, was able to match scratches on the existing piece to details on a PR photo with William Shatner himself holding the piece in his hands. THAT is provenance. THAT is proof. And THAT is exactly what the so-called "Scotty" and "Sulu" tunics lack.

As for my supposed inability to "handle items that come up for high dollar amounts", Ms. Smith is  unaware of the fact that I did so much research so that I could decide whether or not pursuing the pieces was worthwhile for me. To have an original tunic worn by a main cast member is one of my holy grails. But I want one that is a proven example, not something backed by mere conjecture.

Ms. Smith goes on to say this:

"However, if you were aware of the Trek collections that are protected by a handful of longtime fans who have owned these pieces for decades, you would quit trying to be the King of Trek...that position has been taken for some time now. "

So apparently, unless I have a pedigree of some type – like being a collector for decades – I cannot offer a worthwhile, informed opinion on anything. Evidently, it takes decades to absorb the type of knowledge required to know that the "Sulu" tunic is indeed a "Sulu" tunic despite nothing specifically proving it to be the case. I guess that, with time, I'll develop a sixth sense that requires no actual proof, but rather will permit me to magically divine the true nature of a piece.

I had no idea. I truly live in ignorance.

And just as apparently, because I'm a collector who writes passionately about Star Trek, I'm setting myself up as the "King of Trek"? Ms. Smith missed my sidebar wherein I state:


"I'm just a guy who enjoys talking about – and learning more about – Star Trek. I know a little about a lot, and a lot about a little – I value accuracy and always appreciate the knowledge of others. If you find anything that you think is wrong, please drop me a line and let me know."

Put more simply – "if you know something that I've gotten wrong, please educate me!" Unlike those that call themselves "Star Trek authorities" I am painfully aware of my shortcomings, so I actively solicit information from anyone willing to share it.

And since she states that "that position has been taken for some time now", Ms. Smith is apparently acquainted with whoever IS the "King of Trek". Sadly, she did not share that information, and Googling "King of Trek" just gives me stuff about bikes. Dammit.

But wait – there's more! Ms. Smith adds (in another entry):

"Profiles knows exactly who is offering up these items, and their reputations as authorities in the field. These people are not, as you say, "hacks who offer things up at top prices." I don't mean to call you out on your page, but do you know very much about the auction business at all? You seem to think that original costumes are like jeans from the Gap or something; they will always come complete with a name tag (and this is especially not the case with original series materials). If all departments of history operated in the Draconian manner that you insist upon, nothing would EVER be "authentic." "

I won't bother breaking this down, but suffice to say that Ms. Smith is evidently saying "Profiles is satisfied so you should be too". And her question as to whether or not I know anything at all about the auction business is especially ironic, given that it is being asked by someone who is themselves apparently devoid of any real understanding of said business, based on her blind trust in anything Profiles says. Right now, Profiles has a hat attributed to John Wayne in "In Harms' Way". Not only does the hat not match anything seen in the film, but it doesn't even match the screen cap they place right next to the hat's photo as some type of proof of authenticity! And I guess Ms. Smith missed the time that Profiles put an item ON THEIR FRONT COVER that was not only not authentic, but was laughably incorrect. They showed a Statue of Liberty head that was supposedly from the famous climax of the original 1968 version of "Planet of the Apes". An incredibly cool piece – if it had been real. Instead, it was from the 2004 Tom Hanks movie "The Terminal". If they couldn't do due diligence on a piece they featured on their front cover, what's the likelihood of them doing any real research on the hundreds of other items listed in their various catalogs? Wake up and smell the catalog, Ms. Smith. It's rather pungent.

And now we get to the heart of the matter. While calling me out for my uninformed opinions and "inflammatory, un-researched rants", Ms. Smith had absolutely nothing to offer by way of corrections to my addled ramblings. Despite my pleadings to be set straight, she offered no insight as to why my meanderings were actually wrong. She did not offer any additional evidence to support the claim that the tunics were worn by Doohan and Takei. In short, she brought NOTHING to the table, while telling me "you are out of your depth".

So again, I'll make the same request to Ms. Smith that I made previously – please tell me why these shirts are what Profiles claims them to be. Explain to me where my analysis is flawed. I genuinely want to know! THAT is what the comments section is for. To inform with concrete, measurable facts. You have yet to provide any. If your collector friends (the consignors) have proof positive of the claims that Profiles makes, I would applaud it! Why wouldn't I? I'll do an entirely new Blog story trumpeting it to the world!

My offer also goes for the consignors. Show me proof positive and I will sing the praises of your items. Do you have a letter from James Doohan stating the shirt was gifted to him? Great! Do you have a screen-match that proves without a doubt that the gold shirt was worn by Takei? Excellent. That is the kind of proof that is required here. Nothing less will do. Imprints showing rank braid don't cut it.

I'll close with one last comment from Ms. Smith:

"You remind me of a Tellarite. As Sarek once said, "Tellarites do not argue for reasons. They simply argue."

I believe the phrase is meant to say that Tellarites argue without purpose. But unlike those piggy little aliens, I have a simple, basic purpose. Truth. Not some great profound thing, but a very basic, common-sensical type of truth – are these Star Trek items indeed what they are claimed to be? In Ms. Smith's world, that is apparently not a worthwhile question.

Thankfully, I live on a different planet.