During the run of the original series, a number of shots were taken of the Enterprise model. These shots featured various angles and details. They were shot in studio against a blue screen background and then combined with star fields or whatever was required. This week's shot has a paper clapper of sorts which reads "climb shot normal" and shows the Enterprise at a dramatic rear angle with the starboard engine in the foreground. No date is shown so we're left to wonder if this was done for general coverage or for a specific episode. As always, the model is shot showing the starboard side since the other side had the wiring harness on it which would show if filmed. 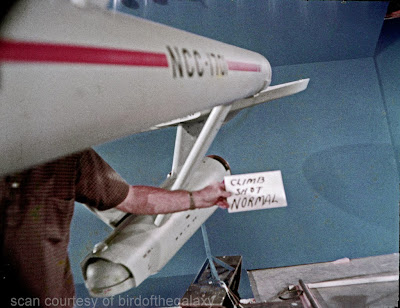