PROFILES' RESPONSE TO THE GREAT TUNIC INQUIREY or NO SHIRT, SHERLOCK 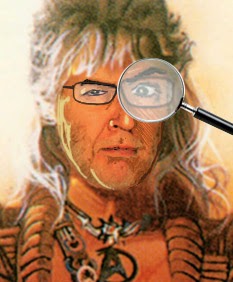 After trying in vain to get Profiles' to tell me whether or not there was any better provenance on the TOS tunics that I've been writing about, I tried one last time via email. To my surprise I heard back from Brian Chanes.

Here's what I asked:

"While I am very interested in the two lots (430 and 431), the only proof of wear by James Doohan and George Takei that you cite is size and indications of rank braid on the sleeves. Those two elements are not remotely enough to prove use by those two actors. For me to bid, I need more definitive proof. Is anything else available? Is there any specific provenance available? Any additional information would be greatly appreciated."

"Both the George Takei and James Doohan costumes were part of a long-term collection from an individual who had top access to obtain the best of the best.  As you know from books like Bob Justman and Herb Solow's book, Inside Star Trek, the show was a low-budget series and Desilu was notorious for being cheap.  The production did not create numerous back up costumes, nor were stuntman tunics made.  If a stunt was required, they would use the actor's tunic for the stunt and then return it to the wardrobe rack.  If the crew visited a space station, they did not make 20 new tunics for the background.  Unless a tunic was completely destroyed, the production used every shirt they had available to get the sequences shot. Once a tunic received too much wear after repeated cleanings, the production would relegate old hero wardrobe to background crew members. We have handled many Original Series tunics in the past exhibiting studio repair to small tears indicating their desire to keep them in service as long as possible. Needless to say, today's production practices towards wardrobe are completely different.

The great majority of season one and season two tunics did not have the actor or characters labeled.  A testament to this was the Spock tunic we sold in December, 2012 that was won by the consignor in a 1968 "Star Trek Design a Costume Contest".  This tunic, complete with original braiding and insignia, came with a signed letter from Leonard Nimoy and a signed letter by costumer Bill Theiss, both referring to the recipient winning his "Spock tunic".  This Spock tunic has no interior label, yet remains the best documented Star Trek tunic in existence.  As stated in the catalog descriptions, both the Doohan and Takei tunics exhibit markings of the braiding indicative of their respective ranks. This, in conjunction with the general build of the actor, is the method of identifying the officer's tunics (unless you are lucky enough to screen match a signature marking on a particular garment).

If you have any other questions, feel free to contact me.

Wishing you a wonderful weekend and holiday season.

Here's the deal: I agree with most everything he says (but not everything). But I still don't reach the same conclusion that, because of these facts, the shirts are what they say they are.

Some of Mr. Chanes' comments are obviously wrong, for instance:

"If a stunt was required, they would use the actor's tunic for the stunt and then return it to the wardrobe rack."

No, they wouldn't. They would use whatever fit the stuntman. It MIGHT have been a shirt used by the character's actor or it might not have been. To say that in every case the main actor's wardrobe was used is not a provable statement.

"If the crew visited a space station, they did not make 20 new tunics for the background.  Unless a tunic was completely destroyed, the production used every shirt they had available to get the sequences shot."

This seems to mean that they made shirts for the main cast and everyone else got hand-me-downs. Again, while they certainly reused the main cast's wardrobe, they also had general wardrobe created specifically for guest or background actors. They had to because at the beginning of production, for example, there weren't any wardrobe pieces to hand down. Also, this would seem to mean that every Redshirt we see would be wearing James Doohan hand-me-downs. All the security guys or Engineering extras had Doohan shirts? Were they all the same size? Obviously not.

So, apparently there are no whiz-bang revelations or ultra-secret details that can lead any expert – no matter who they are – to have definitive proof that the two shirts in question are without a doubt Doohan and Sulu pieces with 100% certainty.

There's a huge difference between fact and opinion. If you can't prove it, it's an opinion.

I only buy on facts.