The words "great" and "legendary" get thrown around a lot these days. But they are totally justified when describing special effects pioneer Ray Harryhausen who died today on London at age 92. 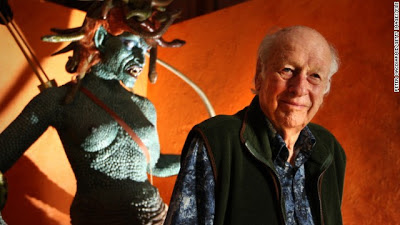 The film industry and movie fans everywhere owe much to Harryhausen, who brought the impossible to life long before the advent of computer graphics. Instead of software and pixels, Harryhausen used the very basics of moviemaking: film and patience. His creations ranged from aliens and flying saucers to gods and demons – and everything in between. He was the acknowledged master of stop-motion animation and was best known for films like 1949's original "Mighty Joe Young", "The Seventh Voyage of Sinbad" (1958), "Jason and the Argonauts" (1963), "First Men In the Moon (1964), and perhaps most notably, the original "Clash of the Titans (1981).

Using stop-motion animation, Harryhausen brought the fantastic to film screens – imagery that was impossible to create in any other way. George Lucas used Harryhausen's techniques to bring to life the immense AT/AT and Luke's Tauntaun in "The Empire Strikes Back". Lucas once said that no other fantasy films had "the same kind of awe" as Harryhausen's movies.

Here's a video synpsis of his work:

Rest in peace, Ray. Thanks for your awesome vision.