New "Into Darkness" poster is one big spoiler

The marketing folks for "Star Trek Into Darkness" seem to have no faith in the innate attraction of the film. They can't seem to make a poster without giving away big plot points, ie, spoilers. 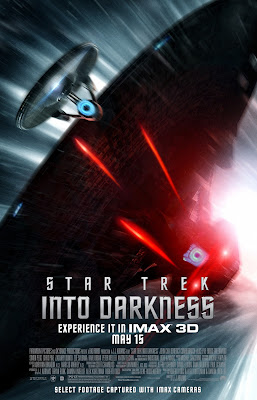 The first US general release poster showed the Enterprise wounded and falling from orbit (see previous post). The new poster for the IMAX release now shows a dark, immense starship chasing down the Enterprise. In my mind, I instantly compared the image to the Star Destroyers chasing the Millennium Falcon in Star Wars. The mystery ship is absurdly large given that the Enterprise is already so big. The thing would have to be a mile long or more!

This isn't new for Paramount, of course. In the trailer for Star Trek III: The Search For Spock the film is touted as "the final voyage of the Starship Enterprise" as we see the ship self-destructing – HUGE plot point given away!

So I'm trying to walk the media mine field until the Into Darkness opens and avoid further spoilers. I think I'm going to need blinders!