Premiere Props, a seller with some baggage, will be offering what they claim are "screen-used" Star Trek items from the original Star Trek series. Their offering reads like a greatest hits list:

Star Trek Communicator – Original Series 1966 - From the first orignal black and white episodes. Designed for the series by Wah Ming Chang, this is a screen used original “stunt non-functional” communicator. 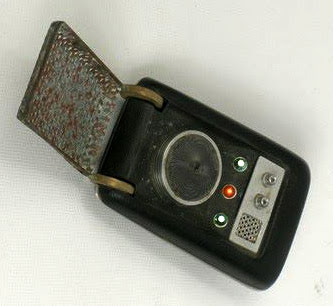 Star Trek Phaser – Original Series 1966 - From the first original black and white episodes, designed for the series by Wah Ming Chang, this is a screen used original “stunt non-functional” phaser. This is one of the early rare “white handle” phaser’s, with the black/white color scheme. Rare since many of these were repainted for the color versions.

Star Trek – Orignal Tribble – Original Series 1966 - From what many considered their favorite Star Trek episode (and one of the intentional humorous episodes as well), “The Trouble With Tribbles, which was the 34 episode first broadcast on December 29, 1967. A trader named Cyrano gives Lt. Uhura a Tribble, a furry Hamster like ball of fur. However it multiplies quickly. 1500 Tribbles of various materials (depending on their purpose) were created for the show. Very few remind. This is a very rare actual screen used “Tribble” from this truly classic episode!

If real, such props would fetch well in excess of $100,000. But just the fact that they are being offered through PP and not one of the big dogs – Profiles in History, Julian's, etc – gives me pause. Add to that the fact that the Communicator shown displays a commonly-faked aging detail on the antenna. References to a "white-handled phaser" and "black and white episodes" are also problematic. FYI: there were no B&W episodes. Ever. Not a good sign. This tells us there was ZERO research done.

It's too early to say anything specific, and their site offers NO details as yet. As with all TOS pieces, the proof of authenticity would have to be incredibly solid. Keep in ind that the Big Three – TOS Phaser, Tricorder and Communicator – might be the most faked props ever. To say that I'm skeptical is an understatement. My bullshit meter is shrieking already!