OKUDAGRAMS PART 5: UP CLOSE AND PERSONAL WITH DATA'S OPS PANEL

This is the fifth in a series of articles about the famous LCARS panels used throughout the different incarnations of Star Trek. Check out my earlier stories for more background.

Of all the LCARS panels seen throughout Star Trek's various incarnations, none got more screen time than the Enterprise-D's Operations (or Ops) panel manned by Lt. Cdr Data. Recently, I came into several original LCARS panels with one of them seeming to be an Ops Station! But was it really? As with some many things dealing with Star Trek stuff, the answer wasn't easy to come by.

Here's the panel in question:

I started doing some basic research and discovered something: while it is in most Next Generation episodes (I did find a single episode in which it is not shown), the Ops LCARS panel itself got very little actual screen time in a meaningful way. We usually only got the smallest of glimpses. A corner here, a severe angle there. Close-ups were few and far between! It was very frustrating. But even so, if you really look hard enough, you can figure out what's going on. And if you're patient enough and observant enough, you'll actually find that ever-elusive close-up.

First of all, here's a primer. The Star Trek: The Next Generation Technical Manual features this piece of art for the section on Operations Management. This is the same piece of art that was used throughout the series. You can see that it matches my panel in every way.

As was explained in Part 2 of this series, all LCARS panels were built on a piece of Kodalith film. This image represents that film. The white areas were then hand-colored but the black never changed.

As I got into it, I noticed something weird – over time the coloration of the panel changed. I asked Mike Okuda himself about that aspect. Here's what he had to say:

"We replaced the backlits on the bridge consoles at the end of most seasons. The consoles endured considerable wear during the course of a season, and we often needed to replace the plex panels on the ops and conn consoles. When we did that, removing the graphic from the old plex usually resulted in enough damage that it was better to make a new graphic. I was not particularly concerned with matching colors closely because of the notion that the panel could reconfigure itself based on the software."

To elaborate on Mike's comments, during the first half of the show's run, a given finished LCARS assembly was permanently adhered directly to the back of the dark gray plexiglass with Spray Mount adhesive making it next to impossible to reuse the film assembly on a new piece of plexiglass. Because of that limitation, the used panels were usually just thrown away as they had no further use.

Let's take a look at how the Ops station changed over time. Because these panels are so busy with details, I've honed in on a single element that helps to quickly demonstrate the changes over time. It is the round detail in the center that I have nicknamed "the compass" for obvious reasons. If we look at the compass over time you'll see that it does change – but not after each season. Let's look:

Note: any color variation from one shot to the other is due to the lighting used on a given episode. What appears as blue in one episode might be purple in another. 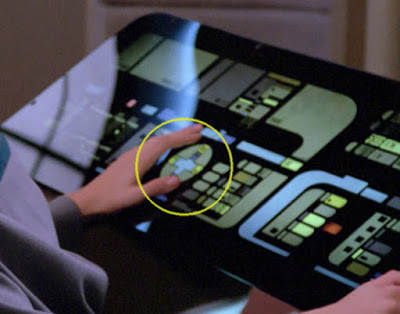 We see a bluish center with tan/orange background. This color scheme is used throughout Season 1. For Season 2, however, that color scheme gets flipped with a tan center and a bluish field: 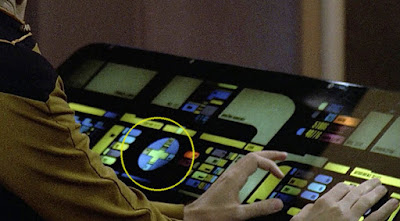 Strangely, though, Season 3 shows no variation. Even going outside the compass we can see that every other color matches. So for Season 3 did they keep the old one? Or did the artist that assembled it use the old one as a guide? Whatever they did, it came through on Season 4 as well: 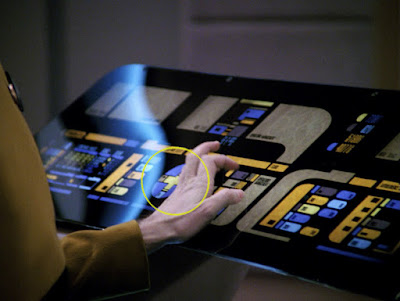 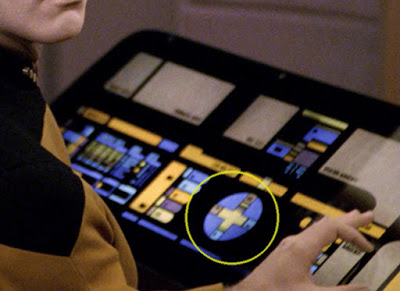 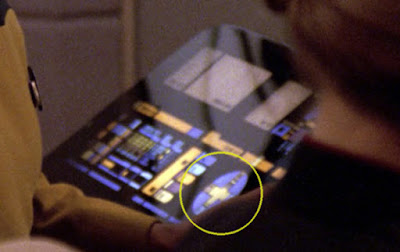 But with Episode 18, Cause and Effect", suddenly the colors change: 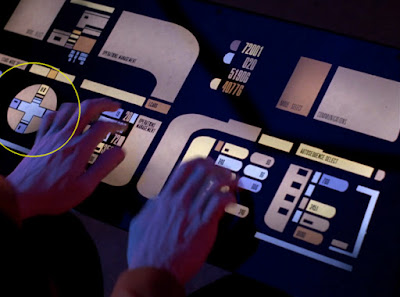 We've got a blue center with a tan field like Season 1, but nothing else matches. This is a new panel created in the middle of Season 5! With Season 6, we get yet another color combo. It's a blue center and tan field but all the details are different from that last Season 5 version when we look closely: 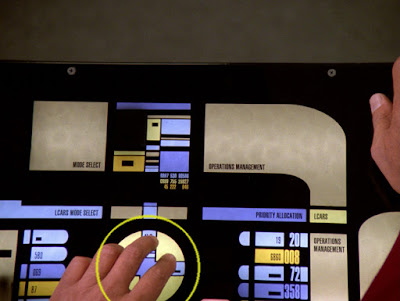 And finally, with Season 7 we get a final color combination: 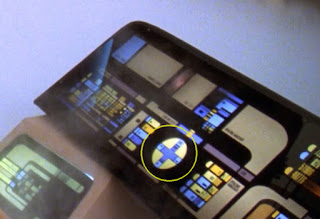 The compass color break is the same as Season 6, but everything around it is different.

So there we have it. We can clearly see five different LCARS Ops panels over the course of TNG's seven seasons. Mine perfectly matches that mid-season changeover during Season 5. I want to be clear here: the Ops station can clearly be seen in six episodes through the rest of the season and my panel matches those views exactly. In every way.

It's important to note that the colors as they appear on-screen is very different from those we see on the panel itself. That is due to a number of factors.

1.  The panel on-set was backlit with florescent bulbs of an unknown type.

2. The lighting of the set itself and the type of film used would shift colors. For instance, the actual colors of the uniforms that you would see if you held them in your hands are not what we see on-screen.

3. The LCARS panels are mounted under a 1/4-inch sheet of smoked plexiglass. This acts like sunglasses to the colors. Everything is muted.

So with that in mind, let's compare. On the left is a screen capture from the classic episode "The Inner Light". We're at the mercy of the resolution of the original image but it's clear enough that we can see shapes and colors pretty well. On the right is my panel, shown at approximately the same angle.

Pick any area and compare the two. The colors all match everywhere. A perfect match.

How about the finer details? There's text all over the panel but finding a clear enough screen cap can be daunting. But here's one from "Cause and Effect", right:

Again, the colors have shifted, but they have shifted consistently. As for the text, the font, weight, size and position all match up exactly.

There is one thing that doesn't seem to match up at first glance. There are some areas on my panel that don't seem to be on the episode versions. Here's what I'm talking about:

Why are there details on my piece that are not present on-screen? I have to admit that I was very confused by this at first. Then I realized that those are the areas that blink.

In addition to the large florescent backlights, the Ops panel has several smaller boxes with lights that blink off and on apparently to give the viewer the impression of activity. According to Mike Okuda, these lights have the very technical Star Trek-ish name of "blinkies". Good to know, Mike!  I created this drawing to explain them better:

I have no idea as to how those smaller boxes were actually placed in the box but my panel does have remnants of adhesive that corresponds with these areas. Here are some screen captures to further explain things. The circled areas show lights blinking off and on in sequence: 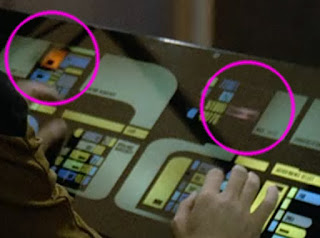 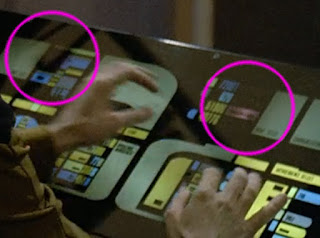 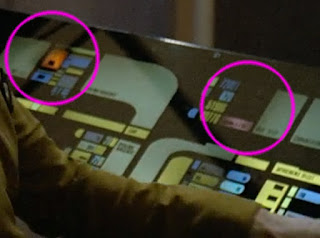 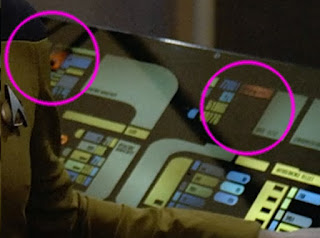 So there you have it. Have I proven my case? I think so.  Here's how the panel currently looks in its custom-built lightbox: 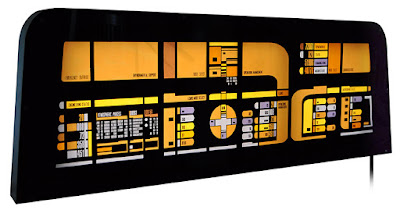 Now here's an interesting bit of information. As far as I know, this is the only surviving example of the Ops station. The last version was used in Generations (as far as I know) and that whole set was trashed in the crash scene. I know of no earlier versions.

So I'm pretty sure this is one-of-a-kind. Very special.

A big thanks to Mike Okuda for his help. Talk about getting it from the horse's mouth! Mike, you're awesome.

If anyone has any any additional information on these, please contact me. I love new information! I'm especially looking for behind-the-scenes shots of the Ops panel, should they exist.

NOTE: For a chance to own this amazing piece of Star Trek history, visit the ScreenUsed auction site. Don't miss out on this and other great LCARS pieces! See it HERE.
Posted by Don at 6:32 PM