OKUDAGRAMS PART 3: WHY THEY SEEM TO KINDA SORTA MOVE – BUT REALLY DON'T

This is the third in a series on "Star Trek's" graphic panels called "Okudagrams". Check out Parts 1 and 2 for the whole story.

In the first two parts of this series, I got into the history of Okudagrams and showed how they were constructed with the materials of the day.

That leaves one big issue, of course: how did so many of those panels move if they're just colorful pictures created on a static piece of film? The answer is – they didn't actually move. They just LOOKED like they moved. If you look closely you'll see that nothing actually moves, but rather there's some sort of lighting effect that gives a sort of iridescent shimmery moving quality to selected parts of some LCARS. For years I assumed there was some type of actual animation at work. I was greatly mistaken.

To clarify: I am not talking about the bits of actual animation which were added in post-production to help tell a given episode's story. Rather I am talking about the stationary, unmoving panels that could be seen throughout the show.

To explain, let's take a look at a real LCARS panel that was created for the episode "Chain of Command". This was a standard panel created using the techniques described in the last chapter. (Note: I have made some subtle changes so that this panel cannot be duplicated correctly and passed off for an authentic version. If you don't think people would try to do that, you've got to get out more). Here's the front: 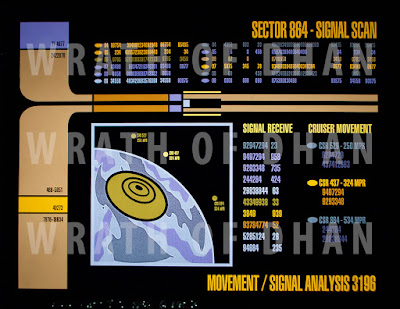 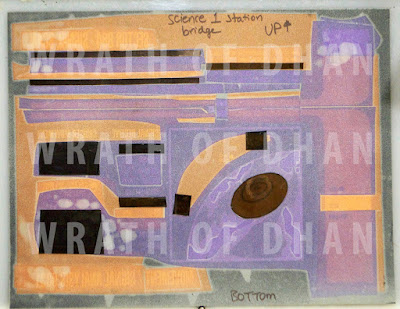 So let's get into exactly what that means. Take a look at this clip from "Chain of Command". Go to 6:30 on the time code and you'll see a scene with Riker and Jellico  talking/arguing about the state of things. The topic at hand – the location of Captain Picard – is being shown on an LCARS panel at the bridge's Science Station 1. Notice how things pulse and glow. Some items turn off and on. Now if you really analyze what you are seeing, you'll notice that no objects actually move.


The way this is achieved is through the use of two layers of polarizing film – one that is attached to the back of the LCARS panel and another one inside the lightbox to which it is mounted. It's a weird bit of science that works very simply, if strangely. A few years back, a functioning Lightbox from the set of Deep Space Nine was sold at auction through Propstore. Here's the excellent description they gave of the process:

"Inside the light box, fluorescent lights sit behind a round polarized filter that spins via a belt. The  polarization of the lens sends the light out in different directions toward the LCARS panel which is covered with diffusion paper. Attached to portions of the diffusion paper are small polarized sheets. These sheets are patterned in a way that causes the LCARS panel to appear as though it has a moving display when the light from the spinning polarized filter hits them from different directions."

Here's an interior shot of the DS9 Lightbox that they sold:

Notice that the box used florescent tubes which were by far the best way to illuminate large flat areas like an LCARS panel. Six tubes are seen. Imagine the heat build-up and this is only a single panel. The Enterprise-D Bridge and Engineering sets were covered with these babies. It must have given the AC a run for its money!

But the most interesting thing is the detail in the center:

We can see an electric motor with a spindle but there's nothing apparently mounted to it. That is because the polarizing film is translucent and when back-lit it virtually disappears. It is only when it interacts with the OTHER piece of film that is on the LCARS back that anything happens.

Here's a great video that explains the interaction in a visual way. Things get very interesting at about the 2:00 mark:


Combine that knowledge with this video of the Propstore piece and you'll have a new understanding of the science and execution involved in the complete process. Keep in mind that there is a spinning disk on the inside, though it is virtually impossible to see it.


So the designers of a given LCARS panel decided what areas that they wanted to be "glowy/pulsy" (my new technical term for this effect) and selectively applied the film to the panel's back.  By utilizing this relatively low-tech gimmick for their panels, the Star Trek artists were able to bring life to what would otherwise be static (boring!) panels. And they avoided the need to use actual CRT screens showing live animation, a technique that was used in the films but one which was too expensive and time-consuming to use for a TV series. As screens got smaller and thinner, that approach changed. But throughout the run of The Next Generation, live screens were almost never used.

As an aside, apparently this polarizing film effect was used in the 50's 60's and 70's for various advertising and attention-getting purposes. I have no memory of ever seeing this in person, however.

This technique was used in NextGen and DS9 as well as Star Trek V, VI and Generations (though the films also added CRT screens to the mix). By the time we get to Star Trek: First Contact, the old school polarized film technique was gone. The LCARS were all video-fed screens from that point on as far as the Enterprise-E was concerned though some large panels were simply back-lit without the polarized effect. Deep Space Nine would continue their use while changing over as time went by. Voyager used back-lit panels but I'm not sure if they used the polarizing effect or not. It doesn't seem to be used but I'll need a little help from my friends on that topic to say for sure.

So that is how the whole shebang worked. My thanks to fellow LCARS enthusiast Ray Minarcik for pointing me to the Propstore auction, without which this story would not have been as complete. In the next chapter I'll be breaking down some key types of LCARS and how they were incorporated into the story-telling.