This is the second in a series on "Star Trek's" graphic panels called "Okudagrams". Check out Part 1 for the basics.

NOTE: I am a graphic designer who started out in the 80's. In one of my first jobs I created color graphics for trade shows and industry meetings including overheads and slides shows. I used EXACTLY the same process that is described below so I am very familiar with this system. My stuff didn't end up on television, of course!

As all Star Trek fans know, in the twenty-fourth century, things are made of exotic materials such as transparent aluminum, duranium, tritanium, neutronium, and of course, Trellium-D. There are minerals like kironide and pergium (a favorite snack of the Horta, of course). And don't get me started on Protomatter or Omega Particles. Not. Good.

So with all that very-high-tech-sounding stuff, it might surprise you to find that the most sophisticated computer system interface of the day – LCARS (Library Computer Access and Retrieval System) – is actually made out of rather ordinary twentieth-century stuff. Film negatives. Plastic photographic colored gels. Some Plexiglass. Oh, and lots and lots of black gaffer's tape (like duct tape but different). Yeah, I said tape. All of these things were common to graphic designers of the day, so as a designer, creator Mike Okuda used the tools of the day to best achieve his goal: a visual representation of believable future technology.

Let me take a moment here to explain the huge difference between now and then as it pertains to the subject at hand. It's vital to understand that these panels were all created in the pre-digital age of the 1980's. Because of this, it would be virtually impossible to recreate these today using the same process because the basic products used (like the film and the camera used to shoot it) no longer exist. Today we'd fire up the computer and use a vector-based drawing program (I use Adobe Illustrator) to create perfect, crisp high-res files. We'd then shoot that file over to a high-end inkjet printer that printed on white translucent film. We could go from start to finish in just a couple of hours, depending on the nature of the panel. But back then everything was done with, to quote Spock, "stone knives and bear skins". It was all manual, it was all analog, it was very time consuming.

Let's take a look at exactly what I'm talking about. Here's a scene from Star Trek VI: The Undiscoverecd Country which featured panels made in the same way as the NextGen LCARS. Check our the panel that Kirk is looking at: 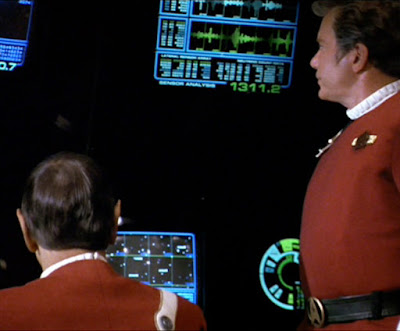 Here is the actual panel as it looks today: 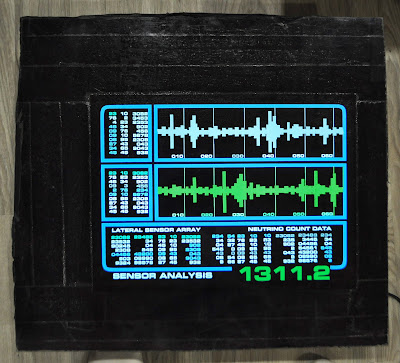 If you look closely you can see that it is covered in a frame of black tape. But on-screen it looks so clean. What's up? Well, on-set the panels are mounted into their positions then covered with a large piece of dark gray plexiglass which makes any imperfections (like the tape) disappear while letting the backlit graphic shine brightly through. Regarding the tape, it is applied from the back. On the front we see the adhesive side through the clear plexi that everything is mounted to. 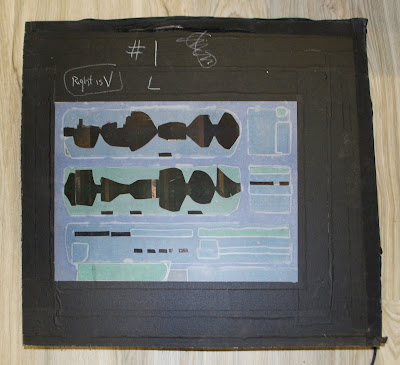 We can see the black tape that frames the art area. But what's all that odd mix of stuff in the image area? First off, the image itself is on a piece of Kodalith film which was perfect for the job. It gave a totally opaque black (so no light could leak through or soften the image) and a perfectly clear positive area (so that the backlight would transmit through it perfectly). The blue and green stuff is transparent photographer's gels (used to tint lighting during a photo shoot). It was simply cut out and applied to the back of the film negative with 3M spray adhesive (a product I still use today as it still has its uses in a design studio). The various colors are placed to correspond with specific areas on the negative. The white-ish layer is a white translucent sheet used to diffuse the lighting. All of these layers are then attached with spray mount to the forward piece of clear plexiglass. The tape is used to mask any border areas that the film doesn't cover.  The very dark irregular areas in the midst of the image are what makes these very unique things. They are a polarized film that makes a very interesting effect. More on that later.

So – first things first. The very first step was to prepare black and white artwork. This would have been done with type being created on a phototypesetting machine and output to photo paper which was then pasted onto an artboard (yes, pasted!). The graphic area would have been drawn with a combination of pen (!!!) and black line tape. A negative would have then been shot which would have reversed the positive and negative areas – perfect for the high-contrast design of LCARS. 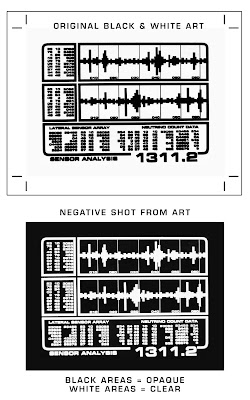 That negative was the foundation on which the finished panel was built. Here's a diagram that shows the different layers and how they came together to create a panel (click to enlarge): 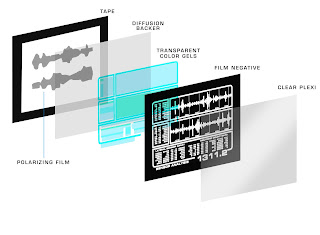 All of these layers got sandwiched together to form each panel. On the early panels like this one, the film neg itself was sprayed with adhesive and permanently attached to the clear plexi. In later pieces, they figured out that they didn't need that step so in later NextGen examples, that plexi is not present.

This Next Gen LCARS is seen in "Descent" and "Interface":

Here's the actual panel as it sits on a lightbox. Notice it has no tape on its edge like the earlier piece and is not mounted to plexi: 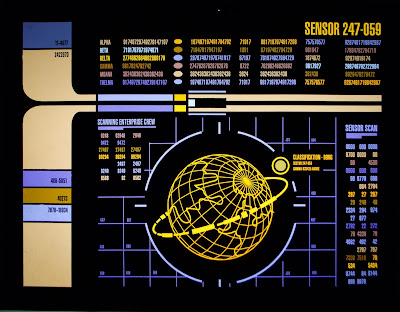 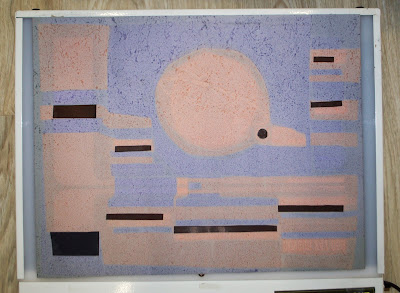 You can see that the color was achieved in the same way as the first piece – colored gels overlaid on the negative (using spray adhesive) with a diffusing sheet over the whole piece. The dark areas are the same polarizing film as before.

So these pieces get mounted on the set over top of the backlight box, then get the dark plexi placed over them and – voila – 24th century technology at its finest!

This is how every single LCARS panel seen through the seven year run of Next Generation was made as well as much of Deep Space Nine. Any time actual animation appeared, it was added in post-production as a special effect. It was NEVER live on the set.

Here's a great shot of Mike Okuda with one of his creations before it was mounted on plexiglass. He seems to be holding one of the "keyboard" sections used on the rear bridge stations. 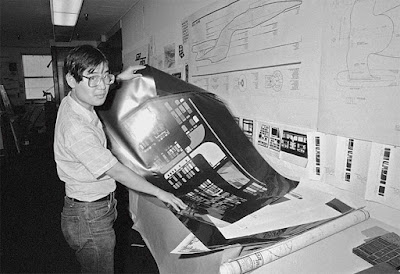 During the production of the early movies, the three lower panels were mounted as a single piece. Here's an engineering station lower panel:

These are all stuck directly to a single sheet of plexiglass. You can see the ton of tape used to mask the edges. The dark plexi would go over this to give a seamless, clean look. Here it is on-set: 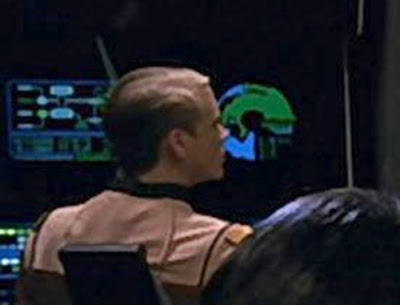 So that is how the magic is done. Except for the polarizing effect that I mentioned earlier which is the REAL magic. What's up with that?

Stay tuned – that's up next time!