THIS SATURDAY CATCH A GLIMPSE OF A TRUE RARITY: THE DISASSEMBLED ORIGINAL ENTERPRISE MODEL AT SMITHSONIAN

Spread out in pieces on a work table, the USS Enterprise sits as if on a flat space dock, its parts carefully laid out around her iconic saucer awaiting the Starfleet engineers to complete their final assembly. But this is no fictional shipyard, but the real-life Smithsonian National Air and Space Museum.

The old girl has been to hell and back but she's finally getting the long-awaited refit she deserves. That's right – the original 11-foot-long shooting model of the legend that started it all – the USS Enterprise NCC 1701 – is in for repairs and will be on display this Saturday during the annual Open House at the Steven F. Udvar-Hazy Center on Saturday, January 30. She's been taken apart, prodded, analyzed and measured, all toward the goal of stabilizing the model and returning it to its appearance from August of 1967, during the filming of the episode The Trouble with Tribbles, which marked the last known modification of the ship during the production of Star Trek.

This isn't the first time the model has undergone restoration. The last time was in the early nineties and lead to a controversial outcome. Instead of being given a freshening that would have reflected her true appearance in the studios of Desilu, someone thought it would be a good idea to "idealize" her and gave her an overly-detailed, totally inaccurate paint job instead. To this fan's eye the outcome was not pretty and should never have been called a "restoration" as the original appearance was never "restored". This time around things are apparently being done differently and the goal is a TRUE restoration – make her look like she actually did during original production almost a half century ago. 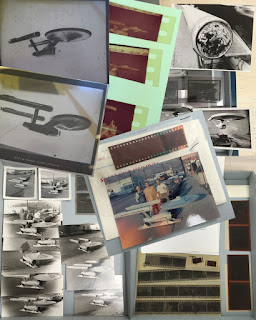 The final painting of the Enterprise model will begin in April, using newly discovered reference photos from an appeal to Star Trek fans in the fall. That appeal garnered all sorts of images that haven't been seen in decades and will aid the conservation process.

For a full report on the process and more photos, visit the Smithsonian Natioanl Air and Space Museum page.