This past weekend, Premiere Props had their most recent Hollywood auction (September 29 and 29) that featured items from film and TV productions. They were offering a number of Star Trek items, so they definitely caught my attention. 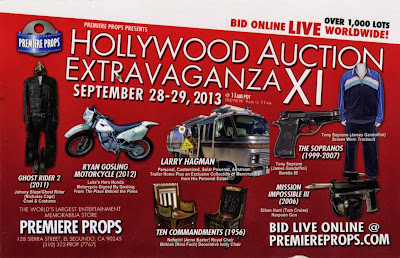 Unfortunately, PP has a very bad reputation for two aspects of their auctions. The first is shipping in a timely manner. For some reason, the folks at PP are unable to place won items in a box and ship to winners in anything like a reasonable time-frame. They state "Please allow approximately 10-12 weeks from the date payment is received and processed for your order to ship." That's three freaking months! And that's crazy.

The second aspect is their apparent lack of authenticating items they are selling with any sort of accuracy. In their Hollywood Auction X, they offered several classic Star Trek items as original props when they were obviously fakes. Obvious, that is, to those with knowledge of such things. But Premiere made no effort to reach out to those that could definitively tell them whether or not their items were real. And as a company that resells props FOR A LIVING, they had to know of the inherent problems when dealing with Star Trek original series props. They are among the most faked props in the hobby!

Once they were confronted with the truth of the items, they then sold them as "real fakes". I kid you not. They changed the title to "Forgery Communicator". The difference was that the fake sold for $200, while an original would have sold for tens of thousands of dollars. Big difference.

Now we fast-forward to the recent auction and we find that Premiere has added new text to each of their auction listings which specifically deal with authenticity:

"This item has been authenticated and marked with new technology by MovieProps DNA to prevent against fraud and counterfeiting. A panel of industry experts not affiliated with Premiere Props in the movie & TV memorabilia business has authenticated this item. This item now includes three levels of security: 1) DNA laced invisible ink – a 9-digit code laced with DNA ink is placed on an appropriate place of the prop/costume and can be only viewed using a high-frequency UV light. The chances of replicating the specific DNA sequence which is unique to MPDNA is 1 in 33 trillion. This DNA sequence is so secure it is admissible in a court of law.?? 2) Archival Microchip Encrypted Tag - a patented,  acid-free,  1"x 3" tag with an encrypted microchip is placed onto the Certificate of Authenticity. The microchip contained within the tag contains all of the pertinent information about the prop or costume. The tag is tamper proof and the microchip is encrypted,  making it impossible to duplicate.? 3) The certificate also has the 9-digit DNA invisible ink mark which must match the 9-digit invisible ink mark on the prop. This will ensure that it is a genuine prop issued by Premiere Props and authenticated by MPDNA."

Now this is what I call "blinding with bullshit". I don't know about other collectors, but for my money, the ONLY important part of the text deals with authenticity. The rest of it – the MovieProps DNA – is all smoke and mirrors. What we really care about is HOW YOU AUTHENTICATED said prop, not how you then branded it with some high-tech stamp. But while the marking of the prop gets 90% of the attention, the actual authentication issue is handled only with this:

"A panel of industry experts not affiliated with Premiere Props in the movie & TV memorabilia business has authenticated this item."

Who are the individuals that comprise this wondrous panel of experts? We don't know. What's their background and expertise? No idea. But apparently we are supposed to take comfort in the fact that people they won't identify, who have an expertise that we can't evaluate, have authenticated their offerings. Wow, I feel better already. Here, let me throw my hard-earned money at you.

People, PLEASE don't buy into this bull! They are offering you NOTHING in authenticating! Anyone can make a claim. But without substantiation, a claim is worthless. Just as this claim is worthless. So if you bid on anything last weekend based on this "assurance", I've got a bridge to sell you in Brooklyn. This so-called "panel of industry experts not affiliated with Premiere Props" is nothing but a way to make you feel artificially confident in what you are buying, so don't be fooled.

In screen-used prop and costume buying, you really need to do your own, independent research. Talk to other collectors and people in the know. Only when you have independently satisfied yourself that something is legit should you proceed. When it comes to dealing with auction houses there's only one way to approach the situation: question EVERYTHING and believe NOTHING.

The only way that these kinds of things will get fixed in the future is if we call the perpetrators on it now. Don't let them get away with it.