When the recent Profiles In History auction catalogs came out, I did what I always do – eagerly looked to see if there was any Star Trek TOS or TOS movie stuff. As luck would have it, there was only one piece that fit my collecting profile – a wrist communicator from Star Trek: The Motion Picture that was attributed to Kirk. 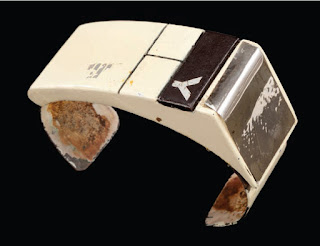 Now, I LOVE hero props that can actually be connected to the hero. I know that sounds strange, but frankly most heroes can’t be put into a specific actor’s hand, so this was an exciting prospect to me. The photo of the piece was great. I had no trouble believing it was a resin hero TMP wrist comm. But hold on a minute. The “Kirk” attribution was based solely on this:

“Inside armband was written in light pen, “Kirk”. “

And then they showed a screen cap of Shatner as Kirk with a wrist comm. 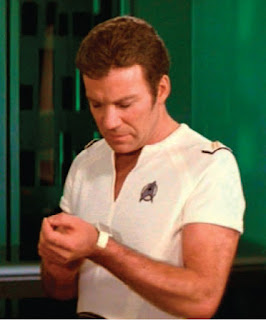 Which is all well and good, but the shot of Kirk that they used didn’t actually confirm that THIS piece was on his wrist since it wasn’t a close-up showing the face. Every main actor in the film had one of these on their wrist – they weren’t limited to Kirk. So how exactly does this screen cap prove anything? It doesn’t. So we have to go on a hand-written “Kirk”.

And in my opinion, that hand-written attribution is worth NOTHING. Zero. That could have been added at any time over the last 33 years since the piece was used. If someone wanted to sell you “the original Maltese Falcon” and insisted it was real because someone wrote “Bogart” on the bottom, would you believe it? If so, I’ve got a pretty black bird I’d like to sell to you.

That said, the shot of the actual prop being sold was very good. And I knew that they made tons of variants of these so that if I could find a Kirk screen cap that showed the face of the comm, I stood a good chance of confirming or debunking the claim.

That’s when I found out that even though the wrist comm was worn by Shatner throughout the film, there’s never a great shot of the prop. It’s simply a costume detail and never gets any screen time, a common thing with such a prop. But I was able to find one scene that had Shatner holding his hand up, and that told me everything I needed to know. Here are screen caps of that scene: 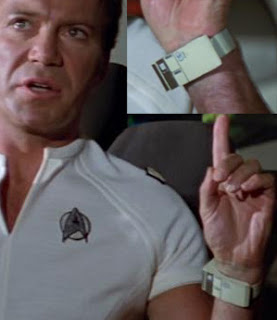 I rotated and blew up the best shot so that I could see the detail. I’ve made no other changes to this shot – anyone can pull this off their copy of the movie.

The piece is not in sharp focus, but even so it is obvious that this piece is NOT the one shown in the Profiles catalog. That one clearly shows the letter “Y” while the screen cap shows something blockier – an “S” perhaps? Also, the 2 ‘buttons” on the Profiles piece are blank and show no indication that they ever had anything on them, while the screen cap clearly shows some type of elongated bar on each button. Again, no match. And that was enough for me.

Profiles has a clear record of stretching the truth whenever it suits them, and turning a blind eye to anything that doesn’t help sell, sell, sell. They could have done exactly what I did, but they didn’t. That would have been inconvenient.

I can’t say for sure that the one they sold was not worn by Kirk at some point in the movie. But the only clear evidence that I could find says that, in those scenes at least, he definitely did NOT. And I don’t buy heroes based on flimsy evidence that anyone with a pen could manufacture in 5 seconds flat, and I don’t pay a premium for “maybe”. So I reluctantly passed on the piece.

The comm did sell and fetched more than $3000. I think that’s a lot for a “generic” wrist comm, but to each their own.

As with all Profiles auctions, "caveat emptor".

Don Hillenbrand
Posted by Don at 10:50 AM