SyFy's "Collection Intervention" OR what my life could have been

Once upon a time, Star Trek was the hottest property in the universe. This was an ancient time called "the nineties" and it was the heyday of Star Trek collecting. All the cool toys that we always wanted were suddenly EVERYWHERE! Phasers and action figures and statues and key chains and plates and trading cards and costumes and model kits and videos and replicas and pewter stuff and infinitely more – and a crap-load of that stuff ended up in my house!

Flash-forward to now and the new SyFy show "Collection Intervention". This is a "reality" show which of course means there's a script but it's not done by actors. The show features two different stories in every episode. I've only seen one episode so far, but I think I get the drift. 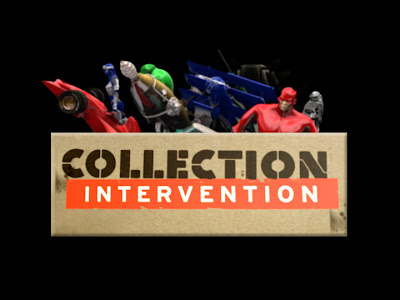 Here's the deal – this is not a show I ever need to see again. It's predictable, plain and simple. Person has overwhelmingly large collection of "stuff" and is forced to come to terms with the fact that it's not normal/healthy to have such a deep connection to "stuff".

That said, I can TOTALLY RELATE to the poor schlubs that are featured. I used to be one of them. As I said earlier, my house (or at least my basement) was over-run with Star Trek stuff at one time. My particular fetish (like tens of thousands of other Trek fans) was the Playmates line of toys. When they hit the shelves they also hit my heart like a bolt out of the blue and from that time on, practically anything they released, I bought. And I LOVED it! Every incarnation of Star Trek was eventually covered which gave us hundreds of action figures and dozens of accessories and playsets. Fun in a box!

My wife, a long-suffering woman, would try not to acknowledge the generally rising tide of plastic that began as a trickle then became a steady stream, and eventually a deluge. She tried to accept my fetish (there's no other word for it) with humor and grace. She had no idea about the particulars – she never really cared all that much about Star Trek one way or the other. She couldn't relate to the idea that if one Picard in Starfleet uniform is good, FIVE must be better! Or TEN! Or...

In the late nineties, as Star Trek enthusiasm began to fade in the media, my collection was COLOSSAL. By that time I had picked up Star Trek items going back to the very first item ever licensed and produced – the original AMT model kit of the USS Enterprise, still mint in its original box (MIB for the initiated). I also had every Mego figure, Remco playset and Thermos lunchbox ever produced.

To paraphrase one of my favorite Trek episodes "It was glorious!"

Or so I thought. But then something happened. I have no idea what the moment of epiphany was, or even if there was one at all. But I remember looking over my multitude of plastic storage bins and finally asking myself The Question: "What the hell am I doing with all of this?"

I know that seems like a basic question but frankly, I had never really asked it before. I had set out to accumulate stuff for one basic reason – I wanted it. But why? It's not like I sat around playing with my treasures. Heaven forbid they should be removed from their perfect boxes! So what was the point?

And that in a nutshell is the question that "Collection Intervention" poses to their subjects. They want them to stop and ask themselves why they have 30,000 comic books when they couldn't possibly ever read them all again. What is their need to have box after box after box of Transformers?

The simple answer is the same for all of us: our collections fill a need. Maybe it stems from a childhood memory of using comic books to escape abusive parents, or a deep desire to connect with a simpler, more basic time of out lives. Who knows? It's different for everyone.

For me, Star Trek has always represented an amazing future. Not perfect, but incredible! A place where mankind has set aside the pettiness of dogmatic differences and says "we'll have no more of that". A place where the human race spans the stars and looks into every corner of creation. For a kid that grew up with the Space Race of the 60's, Boldly Go really sums it up nicely.

So how do thousands of pieces of painted plastic help to fulfill that longing to touch the future? In the same way we touch anything – we copy what we enjoy. We wear it, hold it, talk about it and hoard it. We fill our lives – and our basements – with it. All in hopes of touching the creator. Hey, that sounds familiar.

And then I began to sell off my collection practically overnight. I had multiple sets of things so it took years. You can't quickly get rid of stuff that you spent decades accumulating. And even after all this time, I'm still not totally done, though the little that remains are stragglers that I simply haven't cleared out yet.

Of course, I've replaced one form of collecting with another. Out is the memorabilia and in are props and costumes. But I can honestly say that I now collect in a fundamentally different way. I have to really want a piece – it has to match my focus and my passion. Anything that doesn't do that is not worth my time and money.

And I really, really enjoy my collection in a way I never used to by having pieces around me and on display. The days of hiding stuff in plastic bins are over, thankfully. And while I love every piece in my collection, I know that it in no way defines me. Like any collection, they're toys, they're fun and we love having them in our lives. But they don't love us back or actually give us anything that we don't imbue them with. Their power is all in our heads, and as such they need to be treated accordingly – as something we want, but can live just fine without.