FANTASTIC ORIGINAL SERIES LIRPA FROM "AMOK TIME" IS ON THE AUCTION BLOCK. AND IT'S THE REAL DEAL.

Starting June 29 and going on for three days, Profiles In History's Hollywood Auction 83 has some staggeringly cool and rare props and costumes going all the way back to the 60's and The original Series. One of the most amazing of these offerings is a prop familiar with all fans of TOS – the Vulcan Lirpa as seen in the classic episode "Amok Time".

The claim is that this is one of the two actually used in the filming of the episode. Does that claim, hold up? Let's check it out.

Here's the main shot of the prop that Profiles is selling. Be sure to click on it for the large version with plenty of detail. 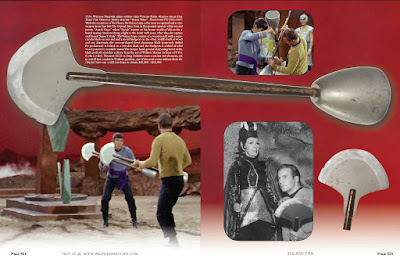 Usually, with any piece offered from TOS, it's super-tough to truly authenticate it unless it comes from the estate of someone like Gene Roddenberry, Matt Jefferies, Leonard Nimoy or Robert Justman. Even then, you have to be careful because things get mixed up over time.

In this case, though, authentication is a pretty simple matter because the piece can speak for itself, something that is incredibly rare for any Trek piece. Because of the size and nature of the prop, its details are easy to see both now and in an amazing still image from its original use back in 1967. The blade was made from aluminum, though it was blunted to avoid any real carnage. But it looks very deadly in use in part because the blade is burnished in a realistic way. And that burnishing tell us everything.

Check out this still from the actual episode, especially the Lirpa's blade: 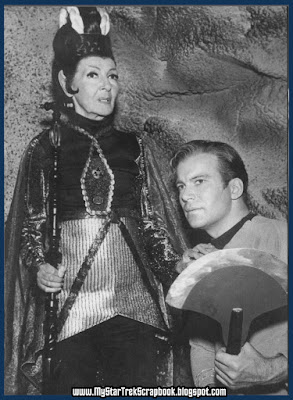 Notice that it has lots of great detail because it's so large and prominent in the shot. This is something that is almost unheard of with most Star Trek props. You hardly ever get a close-up of a Phaser or Communicator and those were used throughout the show's three-year run. But here's a prop that was only used in a single episode, yet we get this amazing image for reference.

So let's now look at them side-by-side and see what we can see: 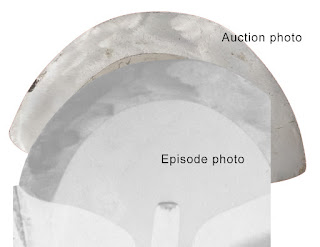 I took the image from the episode and inverted the tones – lights become dark and darks become lights. I did this because, due to the nature of metal objects, lights and darks are purely a result of the angle of the camera and the lights. By inverting the values, we can see what the tones would look like with lighting similar to what Profiles has used. And the results smack you across the face.

The various burnished areas show a high degree of matching. Since it was undoubtedly done by hand with a random outcome, any kind of match would be hard to manufacture. The details are not just similar but exact. Keep in mind that it's had almost 50 years to pick up additional nicks and flaws. I think the photo evidence is very conclusive – this is the Lirpa held by William Shatner back in 1967 as he sparred with Leonard Nimoy on Desilu's sound stage.

That said, I'd like to be clear about something. I've never inspected this piece first hand. And it's impossible to say that its not a reproduction done specifically to fool the eye. But I've seen and held a lot of props over the years and this match seems way to organic and perfect to be anything else but genuine, in my opinion.

This makes this piece one of the rarest and most amazing finds in Star Trek collecting history. A couple of years ago the long-lost Phaser Rifle from "Where No Man Has Gone Before" came out into the light, much to the delight of fans everywhere. This piece is much like that.I have no idea where it's been for 49 years, but I'm very happy to see that it has survived, and in very good condition, too.

The word "rare" get overused these days, especially regarding Star Trek. But this is one time when it's definitely not hyperbole. This sucker is super-amazing-to-the-nth-degree-rare.

Did I mention it's kind of unusual?

Check out the entire catalog here: