THE BEST GIFT I'VE EVER GOTTEN – FROM MY SON THE TREK GEEK!

On Saturday, June 6, 2015, My son, John, was married to his beautiful bride Molly and a great time was had by all. Here's the happy couple at the end of the evening about to embark in their sweet ride: 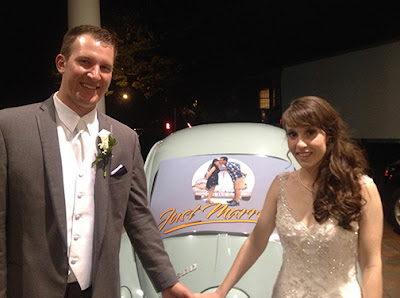 Though there were many, many high points during the weekend, one of the greatest occurred on the evening before the wedding, during the rehearsal dinner when John presented my wife, Paula, and I some gifts. One of them was a pair of embroidered handkerchiefs: 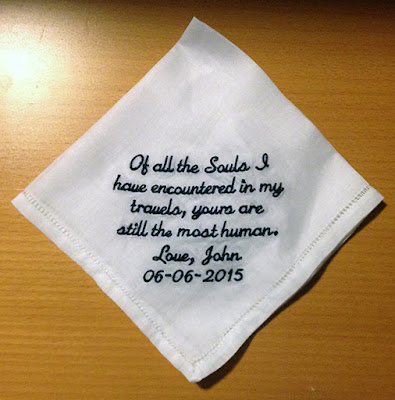 If you're reading this blog then you undoubtedly recognize the sentiment as being paraphrased from Spock's funeral scene in "Wrath of Khan" when Kirk delivers a eulogy for his lost friend. (If you don't recognize it, go watch "Wrath of Khan" for God's sake! Your education is sorely lacking!)

Growing up in a house with me, naturally my son was exposed to Star Trek from the start. He was born during TNG's first season so he literally grew up with Star Trek! When he was about 12, I took him to a local midnight showing of "Wrath of Khan" so that he could experience it as it was meant to be seen – on the big screen! It was a very old and scratchy print which kind of made the experience a bit more special, though there was at least one down side. When Kirk went to deliver his immortal "Khan!!!" scream, the soundtrack jumped and all we got was kind of a gulp instead of one of the defining moments of the movie! But it kind of made it more memorable, so what the hell.

Star Trek has always occupied a special place in my heart and it was awesome for me to receive this insider accolade from the person most dear to me.

It told me that not only did that night in the dark theater hold some true magic in the moment for both of us, but that it also resonated forward to this specific and most important time in all our lives.