"THE CAGE" LASER ON AUCTION AT JULIEN'S PART 2: THE FACTS AS WE KNOW THEM

In Part 1 of the Cage Laser story, I introduced you to some of the basics regarding the piece and its known, surviving versions. This time, I'll get into what we know about the prop based on its use in the show.

First off, let's talk quantities. How many Lasers were made? There's absolutely no documentation to give us a clue, so we'll have to do some detective work. It's imperfect, but it will give us some facts that we didn't have before.

First off, at a glance, all the in "The Cage" Lasers look alike. But through the marvels of modern technology (ie: Blu-Ray!!) we can actually see several kinds of Lasers, providing we look close enough.

The Jein Laser looks to be a hero prop, ie: one made to light up and look good in close-ups. It has a retracting site on its back that apparently once held a piece of glass or plastic but is now long-gone. In theory, the lit tip was important to the special effects people because it gave them a target to use for their optical effects. This was decades before CGI existed, so the laser beam effect was created optically, that is, by physically altering the film's image by using multiple exposures onto a new piece of film. That little light gave them a reference to hit, an important thing given the crudeness of the technology. I can't attest to the effectiveness of the light, but the same technique would later be used on Phaser props as well. Here's what this type of Laser would look like in use:

But we also see a variation of the basic Laser. In a key early scene, Captain Pike is abducted and the landing party respond by pulling out their lasers and firing on the hillside. One of those crewmen was featured in a lone shot: 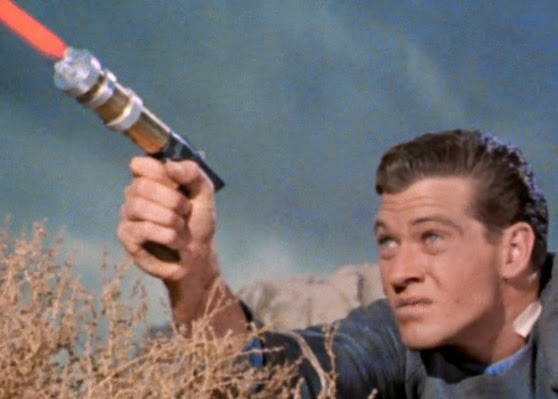 The scene is just a few seconds long, not enough time for us to understand what he's really holding. Here's his Laser when compared to a different one in the same scene: 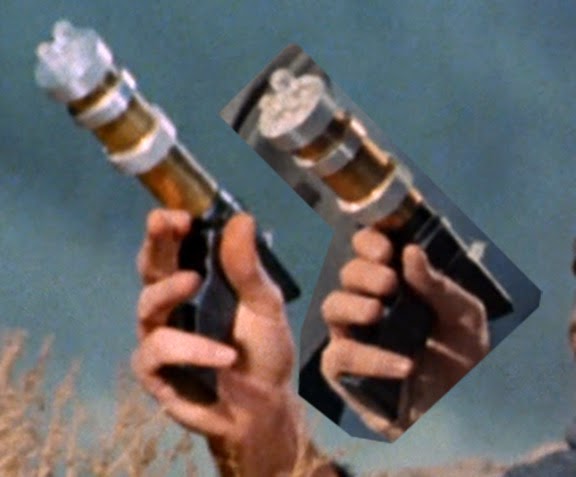 When they are side-by-side, we can see that the first one actually has a longer barrel than the others we see. And, based on the position of its back ring, we can surmise that the barrel might actually be longer through extension. In other words, there could be two barrels, one nested inside the other, which, when pulled, telescopes to a longer length. The Jein example definitely does not have this detail. This version also shows a site peeking up on its back, like hero versions have. It's worth noting that the Julien's piece has a site and an extendable barrel like one shown above.

So, on screen we see "regular" Lasers and "extended barrel" Lasers. Both have sites. Lights are unknown. We don't see any evidence of lights in any frame I've seen.

But wait, that's not all! What's this? In the later scene on Talos IV, when Number One and Colt are attempting to rescue Pike, they are carrying Lasers. Pike snatches each of them out and tries to use them in vain. Neither shows any result. But as Pike is waving these around trying to make them function, we can catch a key detail that helps give us some more important information. Here's what both Lasers show us: 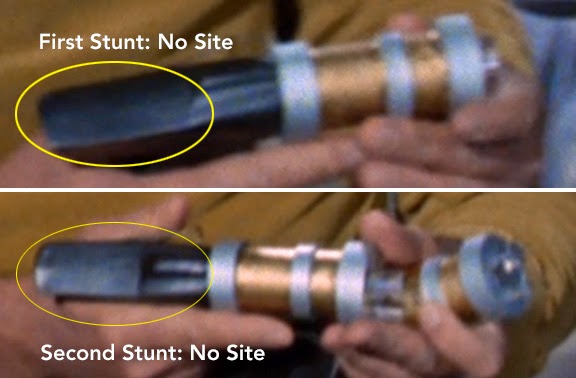 Wait, what?? Where's the sites? He pulls one out, then the other, without a cut, and they both get lit up by a beautiful highlight that shows us that this pair has no sites. The backs are perfectly blank. Why would this be? The answer comes a few seconds later when Pike deliberately throws the pair to the ground.

Which explains everything, of course.

They wouldn't want to risk their hero props by dropping them. So these aren't hero props but stunts – simplified props used to take abuse during action scenes. In most ways they can't be differentiated from heroes because they aren't intended to be seen in close-up. Only by using Blu-Ray some fifty years later can we see the true nature of these props. No site = stunts. And since they weren't meant for close-ups, when the close-up is actually shot we see this:

The two stunts that Pike dropped have suddenly become heroes. One clearly shows its site and its recessed slot. And the other is nothing other than... an extended barrel version from the earlier scene!

So, here's what we know:

We never see more than two hero lasers in any scene. So we know there were at least two heroes made – one regular and one with a longer barrel. Keep in mind that, in the shot that shows Spock and the Lt. firing, one could be the extended barrel version, just in its unextended state. So while I THINK there probably would have been more than two heroes, I don't KNOW that there was more.

We also never see more than two stunts in any scene. Again, that doesn't mean there weren't more, just that we can't know it as a fact based on what is shown on-screen.

So, what we know for sure is that there was at least four Lasers made and seen on-screen:

2. One "Extended Barrel" version with site.

3. Two Stunts with no sites.

I think it highly likely that more than 4 were made, but there's no proof of that on screen. And I can't find more than three in any given frame. If you've found more, please drop me a line!

So that's what the film itself tells us. Next up: the side-by-side! It will be scintillating reading to be sure.