CLAPPER OF THE WEEK: "THE ENTERPRISE INCIDENT"

This week's clapper comes from one of my all-time favorite TOS episodes, "The Enterprise Incident". The episode is only the second time we ever saw the Romulans in TOS and the plot is centered on the now-familiar Trek device, a "cloaking device" – the machine that renders a ship invisible to detection by an enemy. Call it "Trek stealth". The episode features a female Romulan captain, Spock hitting on said female captain, Klingon ships being used by Romulans (the Rom ship model had been lost), and more.  Oh, and the cloaking device itself was actually a reused prop from an earlier episode, the mysterious Nomad spacecraft from "The Changeling". It would again be repurposed in Season Three to create Flint's M4 robot in "Requiem for Methuselah".

The clapper shot shows our intrepid chief engineer Scott using one of his 23rd century super high-tech tools that just so happens to look a lot like a clear plastic ruler. 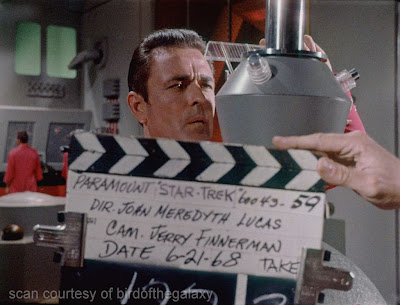