ANOTHER ORIGINAL SERIES PHASER HITS THE AUCTION BLOCK, SO ONCE AGAIN WE HAVE TO ASK THE BIG QUESTION: IS IT REAL?

At this year's San Diego Comic-Con, the auction house Profiles In History created some buzz with its sneak preview of upcoming auction offerings. One of the biggest of buzz-worthy items was touted to be an original Phaser prop from Star Trek: The Original Series (TOS).

Now any time a previously-unknown TOS piece sees the light of day, it's a cause for equal parts of celebration and caution. We celebrate because any additional TOS pieces are exciting for those of us who are fans of what we think is the greatest sc-fi weapon of all. But caution must be used because, frankly, most "authentic TOS pieces" that come to light are simply not authentic. Usually, the fakes are copies are easily debunked and exposed for what they are. But every once in while, a piece comes along that maybe, just maybe, could be the real deal.

Is that the case with the new Profiles piece? Let's take a look. Here are shots from the Profiles auction listing (click for larger images): 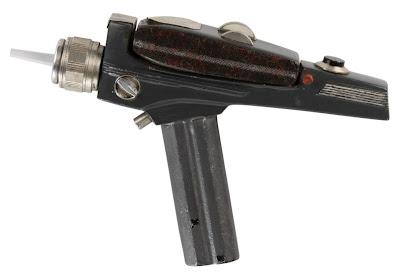 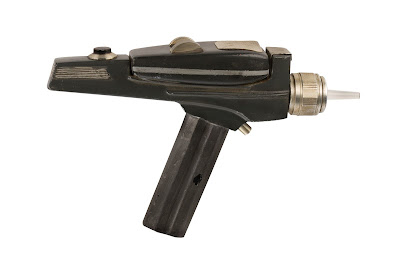 At a glance we can see that this is what is known as a "Mid-Grade" phaser prop. TOS used four different levels of phaser props:

The Heroes – made with a high level of detail and featured some moving parts. These were meant to stand up to close-ups to give a heightened sense of realism. These were expensive to make and so were never put at risk in a scene. Here's a Hero Phaser held by Ben Finney in "Court Martial". Note that all the silvery-looking stuff is actual metal, unlike some p[arts on the auction piece: 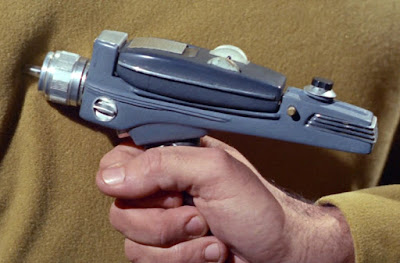 The Mid-Grades – made from the same molds as the Heroes but finished without as much detail. For example, while the Heroes had metal fins in the back, a Mid-Grade's fins were simply a molded detail and hit with silver paint. These were the real workhorses of the phaser props and are by far the version seen most throughout the show. They were easier to make and thus more disposable. Note that the rear fins shown here are simply painted as is the center rail of the Phaser 1: 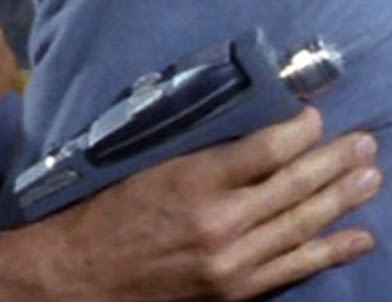 The Vacuum-Formed – known as "Crapazoids" due to their low level of finish and detail, these were strictly background pieces that might be in a given Redshirt's hand during a landing party. So cheap in materials and cost that DeForest Kelley referred to them as "$1.98 Specials". Here's a version also used in "Court Martial". Note that all the details are simply painted and the overall detail is very soft. This piece is about to get slapped out of Finney's hand and, so as not to damage a Hero, a Crapazoid is used instead. 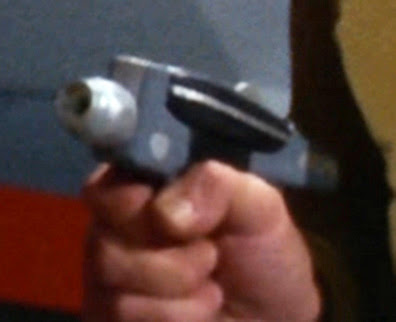 Rubber Stunts – used when Kirk and company needed to roll around in the dirt without breaking something. There's no good shots because they are simply never seen clearly. Here's one tied on to Spock's side: 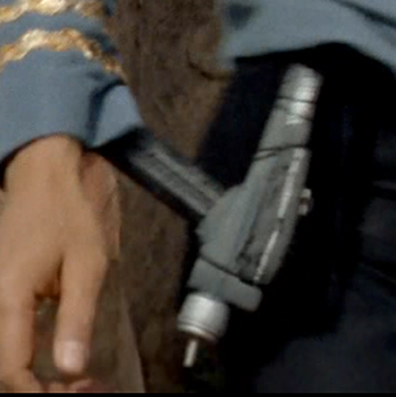 So the auction piece definitely seems to fall into the Mid-Grade level of Phaser. Here's some additional shots that can help make a determination: 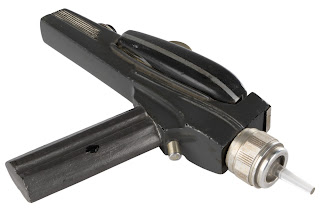 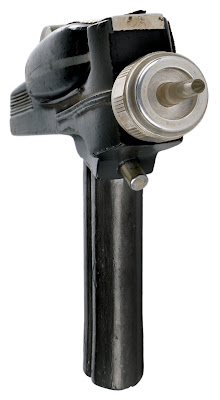 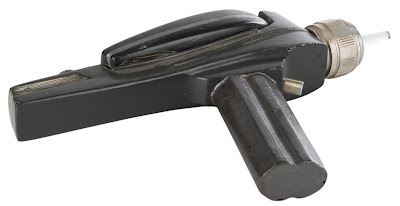 The way we determine if a given piece is genuine or not is a two-fold process. First we look at the history (or provenance) of the piece. Ideally we want to understand how a piece got from the Star Trek Paramount production in 1969 to the Profiles auction. According to Profiles, this piece has been in the possession of the family of one Ted Leonard, a former executive at Paramount and a friend of Star Trek Art Director Matt Jefferies. The piece was sold to the consignor by Leonard's widow.

"But Don," you're saying, "they wouldn't lie about something like this, would they?!?" The short answer is YES! Yes they would! For one hundred thousand dollars, you better have more than just a story!!

Am I calling the consignor a liar? I am not. But maybe they were told a lie. Or maybe Mrs. Leonard was lied to. Maybe Mr. Leonard got mixed up. Maybe, maybe, maybe...

With that many maybe's we have to rely on the piece to stand on its own merits. It must be compared to the known surviving Mid-Grades and a determination must be made as to whether or not it measures up or not.

As mentioned in earlier Blog stories, I am part of a research team that has worked toward defining as many facts as possible about the various TOS props. This process was first started by the group at HeroComm.com, as they took on defining and debunking everything possible about the Trek Communicators. It was then expanded to include HeroPhaser, and it is that research that I rely on to determine whether or not this piece passes muster. And I can say that it is my opinion (as well as many others) that this piece is indeed likely to be an original Phaser prop. I cannot say for sure, as only a hands-on examination would answer questions about size and materials. But going solely on the physical details, this piece matches known specimens in every key way.

Some have said the paint doesn't look right, and they would be correct – it doesn't. And what is with the red button sticking out of the body? That's not right, either.

Here's the deal. These pieces have had fifty years in which they could have been modified in any number of ways, including paint. So we have to look past such things and look at the actual details that define the physical aspects of the prop. We look at things like:

The handle and trigger details

The contours of the entire piece, especially the body's sides

The Phaser 1 that sits on top – correct in every way?

The fins – are they the right size, number and position?

The details and nature of all metal parts

I'm not going to get into all the comparisons made for two reasons. First, it would make for a very looooong and boring story. And second, I don't want to reveal too much about what, exactly, we look for in a prop to determine authenticity. In the past there were many unscrupulous people who tried to pass replicas off as authentic. We don't want to aid that type of forger.

One more thing. The auction listing says this piece was screen-matched to Leonard Nimoy having used it in the episode "The Paradise Syndrome". For those who might not know, "screen-matching" is kind of the holy grail of prop collecting. It's incredibly difficult to do and is usually impossible. But every once in a while you get lucky and a screen match is possible.

This is not one of those times.

Screen-matching relies on two things. First the piece in question must have unique physical details that differentiate it from any other piece. Things like flaws, damage, chipped paint or spilled liquids can help with screen-matching. In the case of this piece it does have a couple of things that could form a unique set of characteristics – a "fingerprint", if you will. First, where the Phaser 1 meets the Phaser 2 body, toward the back, there's a big glob of what is probably glue. Amazingly, that kind of thing can actually be seen sometimes. The other detail is that the painted rail on the the Phaser 1 looks to be a bit low. If we combine those two elements, we might be able to find a screen-match.

Unfortunately, I said that screen-matching relies on two things. The second thing we need is a clear, high-resolution image with which to match. In short, that usually means a close-up. And there are zero close-ups of Spock's phaser in that episode. There's not even a decent medium shot that gives any meaningful information. Here's the best shot I could find of Spock's Phaser in the entire episode: 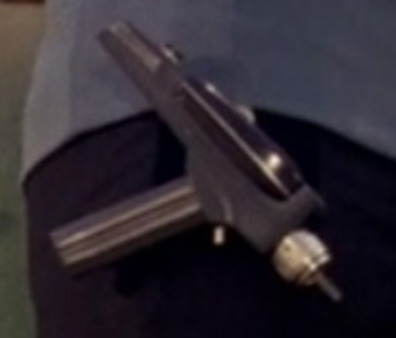 For my money, this tells us bupkis. It's just too soft to yield anything definitive. It could be the same piece but I just can't tell. I went through the episode scene-by-scene (and in some areas, frame-by-frame!) and this was the best I could find. If there's a better shot out there, by all means share it with me. I'd love to see it! But until I see that shot, I'm calling BS on the screen-match. No way, no how. I've looked through a number of other episodes as well in hopes of catching a glimpse. No joy.

But that does nothing to detract from what I think is likely to be an authentic piece. Screen-matching is always unlikely, after all. And this has all the hallmarks of the real deal.

For that reason, I think of this estimate as a "Buy It Now" price rather than a real auction. After all, how many people on earth are rich enough to participate at this level? Not too damn many.

If this piece had a starting price of $50,000 (or less), there would be much more interest in it, in my opinion. It's my feeling that most lofty prices are met by the excitement of multiple bidders driving bids higher and higher in the emotion and excitement of the moment. 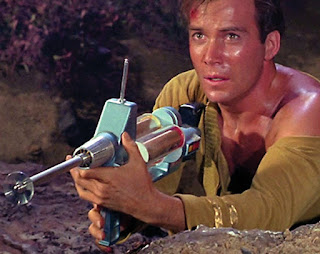 For example, a few years ago there was an auction for Kirk's one-of-a-kind Phaser Rifle as seen in "Where No Man Has Gone Before". It sold for a big $231,000! But the starting estimate was only $50,000. Would it have sold at all had the actual reserve been $231,000? We can't know but it's definitely less likely, in my opinion.

Add to that the fact that this is by no means a unique piece. There are at least five of these pieces out there and we have no idea how many were actually made back in the 60's, but it was probably at least ten and perhaps more. And the last version that was put up at auction didn't sell at all. Twice! It wasn't as nice as this but it didn't sell at half this price!

Bottom line is this: the seller has the right to ask whatever number they want. If you, as a buyer, feel that it's worth it, more power to you.

This piece goes on auction on December 13.  The on-line catalog is HERE.