I have been taken to task by the consignor of the Spock Parka for not revealing the original source of the piece and how it was originally identified as a "hero" piece, ie: a piece worn by Leonard Nimoy. While I don't think it will help his case (quite the opposite, in fact) in the interest of fairness I want to honor his request.

The piece was originally auctioned by Julien's auction house back in 2010. The Parka and a number of other 2009 Star Trek pieces were auctioned off with the proceeds being donated to two worthy charities. Here's the original auction information taken directly from the Julien's site: 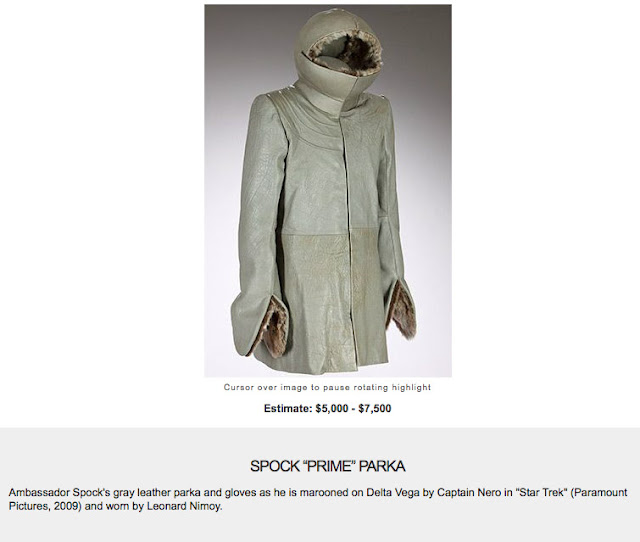 The important thing that the seller wants people to take away from this is this wording:

Apparently the seller does not want us to go beyond whatever Julien's said and look at the facts of the piece itself. It has a label which states "Stunt". Not "Nimoy", but stunt. What this means is simply this: Julien's was mistaken. It's really that simple. But the current seller wants you to forget about that aspect and he's using the original wording to justify his actions.

And the seller is definitely in the know, in my opinion. How so? Keep in mind that he is well-versed in film memorabilia collecting. As soon as he received the parka I think he knew the exact implications of that simple word "stunt". At that point he had two choices:

1. Keep the piece with the understanding that Julien's made a mistake but that he had a nice stunt Spock piece and a charity made some money

2. Send it back to Julien's for a refund as the piece did not meet the description as stated. Remember that what's written in a piece trumps everything else without specific proof to the contrary. If Julien's could not prove the "worn by" statement, they should never have made the claim. And if they COULD prove it, it was incumbent upon the buyer to get that proof so that it could accompany the piece in perpetuity.

The consignor obviously did not return the piece. Neither did he get any proof. But he apparently wanted the next generation of buyer to not realize what "stunt" means (which we now know is: "not Nimoy"). I think he was hoping to sell it to an unsophisticated buyer who would simply accept the "Nimoy" claim without any actual proof to back it up. And that is apparently what has happened.

So there's the whole story. Mr. Consignor, if I have any of my facts wrong, please let me know and I'll adjust accordingly. As for my opinions, well – those are mine and you don't get to vote on those.

WELL THAT SUCKS: PROFILES IN HISTORY SELLS STUNT PIECE AS HERO FOR $19K!

This past week, auction house Profiles in History held their latest Hollywood Auction. The catalog was quite a tome: over six hundred pages of movie memorabilia ranging from posters for silent movies to a shooting model from Star Wars that sold for $375,000 – quite a chunk of change for a 16 inch model seen on screen for about thirty seconds total! But, that, as they say, is show biz.

For Star Trek collectors, this auction had a few items of interest including original series Spock and McCoy tunics from 1967 as well as one of the last pieces ever worn by Spock on-screen – a winter parka from the 2009 Star Trek film. And as great as those 48-year-old pieces were, it's the parka that is at the center of my story.

Here's the piece in question:

And here's the description taken word-for-word from the Profiles auction:

Sounds cool, right? A chance to own one of the last pieces of wardrobe ever worn by the late Leonard Nimoy in his legendary role as Spock. It's any Spock collector's dream piece. And, sure enough, one lucky Star Trek won the piece with a bid of $16,000 which actually means they paid about $19,000 because of a "buyer's premium" that gets added to every win. So the winner paid $19,000 for a Leonard Nimoy Spock piece!

Or did they? Because there's something very wrong with the description. It says:

"Worn by Leonard Nimoy as “Spock” during the majority of his screen time in the film when marooned on Delta Vega." And, of course, the item's actual title states:

So this piece was was specifically used by Nimoy in the movie, right? But hold on because the listing also says this:

This is nothing new to collectors of movie wardrobe, of course. Internal labels can be found regularly in many pieces and are used to keep track of the multiple, identical versions of a given costume piece. This parka, for instance, probably had at least three copies – two for use by Mr. Nimoy and at least one for use by a stuntman. Hence the handwritten "Stunt" on the label which designates this parka for use by a stunt double. But a stunt double is definitely NOT Leonard Nimoy.

Now, this gets a little tricky so bear with me.

So the label says "Stunt", but the description says "Leonard Nimoy" and these would normally be two contradictory claims. A "Stunt" wouldn't be worn by the star, but a star's coat might become a stunt version after the star is done. But the label doesn't say "Leonard Nimoy" as would a piece of wardrobe made for Nimoy that would later be used for stunt work. It ONLY says "Stunt". Which – based on how such things are done with wardrobe – probably means that this piece was assigned   exclusively as a stunt piece and was never worn by Mr. Nimoy. If it was for Nimoy's use it would say "Nimoy" or nothing at all. But it would NOT say "stunt"!

But if there's even a chance it was worn by Nimoy, how would you prove it? By doing what is called "screen-matching" – finding small unique details – a flaw, a tear, a stain, a pattern – something that is unlikely to be (or impossible to be) replicated on another copy– and matching those details to versions actually seen on screen. I have to tell you that, while screen-matching is possible, it's really REALLY difficult to do because usually there's just not enough detail captured on film to allow for it. You need super-sharp, high resolution images to see the kinds of details needed and that's usually just not possible. And even when it is possible, there's no match because there are always multiple versions of a piece and it's just dumb luck when yours is the one on-screen.

But, as luck would have it, it just might be possible to do it with a Spock parka because it has several things going for it:

1. It has a grain pattern which, like a fingerprint, would be unique to each copy

2. It's a medium color which means details stand out better than on light or dark colors

3. Nimoy has several close-ups while wearing a parka, and close-ups are the only thing that work

So with all that going for it, it might be possible to take the catalog image (which is nice and sharp) and screen captures from the film (which are also pretty sharp) and compare them. And that's what I assumed the seller of the coat had done. They had a stunt piece that they thought might be a Nimoy piece so they researched it and – bam! – they found a match!

Except that they didn't. How do I know? Because I did a comparison myself in Photoshop using every close-up in the film and came up with nothing. In every case, each coat Nimoy wears in the film itself looks different from the version sold. I can find a number of details on the auction piece that should translate to at least one of the screen uses, but I found NO MATCHES at all.

Let me put in a sidebar here regarding my own experience with screen-prop/costume comparison: I've done a lot of it over the years. I'm a professional graphic designer so I know all the tricks there are to getting detail out of an image and how to find things that can't normally be seen. But keep in mind that the vast number of times one tries to screen-match something, the screen-match tells us that the items DON'T match far more often than they DO match. As I said earlier, it's really hard and really unlikely. (For more about screen-matching go HERE).

In this case, without a solid, proof-positive screen match of several specific, totally unique details, I can't see how anyone could, in good conscience, call this a piece that was definitely worn by Leonard Nimoy.

Here are my conclusions:

1. 99% of the time when something is labeled a stunt, it's just that: a stunt

2. To prove star use, some specific, provable link has to be made to said star –  a scene from the film or a PR photo of the star with the piece in question are really the only ways to establish such proof.

3. No proof was offered by the seller or by Profiles and I, myself, cannot find anything remotely worthy of being called a screen-match. To the contrary, the evidence points to specific non-matches.

It should be noted that the seller, an experienced Star Trek collector, is seasoned enough to know that a claim of use by Nimoy without specific proof of that claim, was questionable at best. And yet, he put the item up for sale at Profiles anyway. Did Profiles take it upon themselves to call the piece a Nimoy without the seller's knowledge or consent? If so, the seller – known to his fellow collectors –  had weeks between the release of the Profiles catalog and the actual auction to clear things up. But he said nothing publicly so he tacitly approved of their description through his silence.

And as a result, someone is now the proud owner of the most expensive Spock stunt piece of wardrobe ever sold on the open market. $19,000!! Easily triple (or maybe quadruple) what a stunt-only piece would have fetched!

NOTE: Please see my next article for some additional information requested by the consignor of the piece in question.

If anyone can offer real proof that this piece is indeed a true Nimoy piece, by all means, please contact me. All I'm ever after are the facts and if I've missed something, I want to know. But it needs to be incontrovertible proof, please!
Posted by Don at 7:43 AM No comments: